2005: Broadening support for the environment (and dinosaurs) 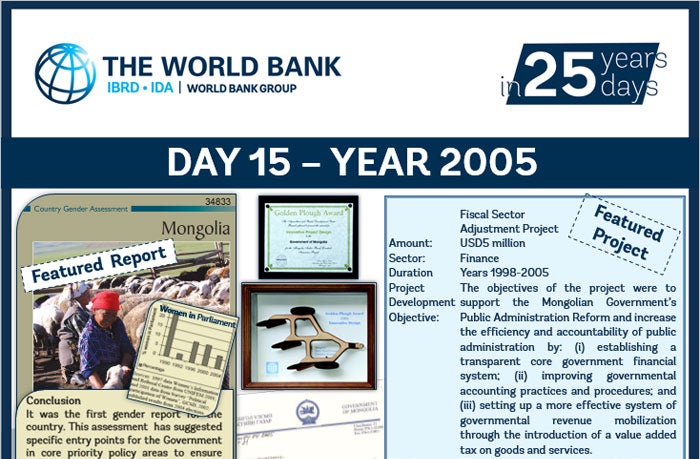 In our one-year-at-a-time celebration of the 25 year partnership between Mongolia and the World Bank, today we look at 2005.  Growth remained a robust 7.3% and industry, which includes mining, continued to produce a larger proportion of Mongolia’s GDP. 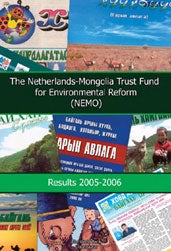 The need to strengthen and advance the environment and natural resources agenda in Mongolia was becoming more visible, and help advancing this agenda came from a 2005 grant, managed by the World Bank, from the Netherlands to the Government of Mongolia.  The Netherlands-Mongolia Trust Fund for Environmental Reform (NEMO) originally was to close at the end of 2005, but as it was showing results, the grant was extended several times. NEMO marked a major scaling up in the scope and type of both the Bank’s and Netherlands’ programs, bringing a stronger focus on environment and natural resources management sustainability in the context of poverty reduction and economic development. “Almost all parts of the environmental agenda, almost all environmental agencies and NGOs, and almost all parts of the country have been touched by NEMO.”  NEMO provided technical assistance related to the illegal wildlife trade, illegal wood supply, and forest cover mapping; assessments of tree planting initiatives, compilation of a comprehensive database of fishes of Mongolia, and studies of the impacts of tourism and mining on the natural and social environment, as well as the impact of human intrusion on the Khulan, or wild ass. The projects encompassed urban environmental services, and supported an update of legislation on toxic and hazardous substances.

NEMO’s very successful Small Grants Program generated 2,024 proposals by 2010, and 184 grants have been awarded, including at the famous paleontologists’ haunt, the Flaming Cliffs: “The herders' cooperative has brought order and safety to the chaotic parking on the cliff edge, started to collect and account for visitor fees, regularly cleared this local protected area of trash, established two small ger museums, and rationalized the sale of handicrafts by their members.” As the World Bank’s only Senior Biodiversity Specialist wrote: “Small grants are fun. They get money into the hands of small local NGOs and other groups. They cover a range of fascinating community priorities. The government uses them to demonstrate (or not) the validity and efficacy of their policy decisions.”

Other aspects of the environment merited attention in 2005.  A study on the Impact of Improved Stoves on Indoor Air Quality showed that ambient (outdoor) air pollution in the ger areas pervaded the indoors, as well.  “In homes with all stove types, the average level of indoor concentrations of PM [particulate matter] and CO [carbon monoxide] exceeded Mongolian national standards for 24-hour concentrations, and in the case of PM, the excess exposure was large.” The report concluded: “In Mongolia, respiratory diseases are the primary cause of morbidity and mortality among children and the fifth leading cause of death for the overall population. Given the high burden of respiratory disease in Mongolia, and the well-known connection between air quality and respiratory health, efforts to reduce air pollution levels should receive priority.” This study by ESMAP was one of several studies over the years on air pollution in Ulaanbaatar that supported efforts by the World Bank and other donors to help the city reduce the severity of air pollution in Ulaanbaatar, a struggle that is far from finished.

For those living in rural Mongolia, an important milestone came with the approval of the Index-based Livestock Insurance Project in 2005. The project built on earlier analytical work examining whether a systematic way for insuring herders against natural disasters without distorting their incentives to care for their animals. The project aimed to ascertain the viability of index-based livestock insurance by piloting Index-based Livestock Insurance (IBLI) in three aimags, for three consecutive seasons. The IBLI pilot was successful and later scaled up nationwide. The project was recognized for its innovation, sustainability, and replicability when the World Bank presented the Government of Mongolia with the very first Golden Plough Award.  The project’s sustainability and replicability are evidenced by the fact that although the project officially closes next week, index-based livestock insurance will continue to be provided through a new company created for this purpose. (Videos here and here.)

After the successful completion of an earlier project with the same name, the Second Private Sector Development Credit was approved in 2005.  The project, like its predecessor, sought to expand the availability of term lending to Mongolia enterprises, and it was successful. Term financing (i.e., longer than one year) by the participating financial intermediaries (PFIs; Mongolian commercial banks) to commercially, technically and financially viable borrowers increased more than ten-fold between 2005 and 2011.  The PFIs improved the quality of their term lending portfolios over the life of the project with continued decreasing non-performing loan (NPL) ratios.  The Bank of Mongolia’s Supervision Department received strong technical assistance to be more responsive during financial crises, and the PFIs were able to develop more new services and products (such as card and e-banking) and expand their business to other regions with strengthened credit risk management capacity and an improved IT system.

In 2005, a Country Gender Assessment, produced by the ADB and the World Bank, drew attention to the different impacts of the transition on women and men.  “A disproportionate number of female-headed households are living in poverty and that the proportion is growing. … [W]omen work longer hours than men do as families rely more on subsistence production and casual employment to meet household needs. This means that women, and to some extent children, are less able to take up alternative economic opportunities and that their health and education are compromised. Maternal mortality rates have remained higher than they were before the economic transition, and other health indicators associated with poverty, such as child mortality, have rebounded.”

In late 2005, Mongolia committed to implementing the Extractive Industries Transparency Initiative (EITI). And a resolution this effect was approved early in 2006.  When Mongolia became EITI compliant in 2007, it was one of the first 10 countries in the world to do so.

Next we look at 2006, the year that mobile connections and school libraries came to rural Mongolia.