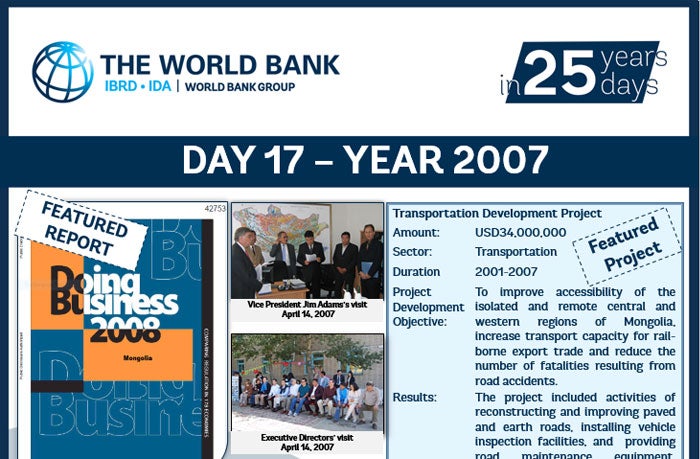 In 2007, Mongolia’s economy grew at a double digit pace with modest inflation. The slump of the 1990s must have seemed a distant memory in the last full year before the elections in 2008.

The previous year saw several iconic projects approved, and 2007, the next year in our 25 years in 25 days reflection, did likewise.  The Renewable Energy for Rural Access Project (REAP) became effective in 2007 and was ultimately expanded.  The project brought a modern solution to a century old problem:  how can the benefits of electricity be harnessed to benefit the quarter of Mongolia’s people who are nomadic herders living in gers?  Connecting them to the grid was not a solution both because distances are vast and because nomadic people move around.  The modern solution was to give the herders access to solar power through a program launched by the Mongolian Government supported by the World Bank and the Government of the Netherlands. “Thanks to the National 100,000 Solar Ger Electrification Program, over half a million men, women and children, covering half the rural population of Mongolia and 70 percent of herders, now have access to modern electricity.” For these 100,000 herder families, the off-grid solar home systems generate enough power for lights, televisions, radios, mobile phone charging and small appliances. (Video here.)

The Second Sustainable Livelihoods Project, the second of a three part program, was approved in 2007 and took effect the following year.  The project, financed by an IDA credit, and IDA grant, and a grant from the European Union, supported a wide range of activities aimed at enhancing livelihood security and sustainability by scaling-up institutional mechanisms that reduce the vulnerability of rural communities throughout Mongolia. (Video here.) The project supported improved pastoral risk management and helped establish, on a nationwide basis, the Community Initiative, an effective, transparent and socially inclusive mechanism that empowers communities to identify and implement small public facility improvement projects. (Video here.) SLP-2 also supported microfinance, deepening and widening access to sustainable financial services to rural citizens.  More than 32,000 micro-finance loans were dispersed in rural Mongolia benefiting 150,000 people. (Video here.)

The Education for All Fast Track Initiative (EFA-FTI) provided a $29.4 million grant, approved in 2007, that upgraded classrooms, dormitories, and facilities, helped pre-school children in rural areas gain access to pre-primary education through mobile ger kindergartens, and provided training for teachers.

A 2007 report examined the Enabling Environment for Social Accountability in Mongolia, seeking “to analyze conditions that influence the ability of citizens and their organizations to promote accountability of public institutions in Mongolia; to identify priority areas for policy, legal, regulatory, and institutional reforms to improve these conditions; and to identify areas in which the capacity building of civil society organizations and the Government of Mongolia may be promoted to enhance social accountability for improved governance, social and economic development, and poverty reduction.”

The study, which helped lay the groundwork for more recent initiatives on social accountability, recommended actions to increase CSO financial resources and capacity, and noted “the need to improve the quality of the media to ensure freedom of expression and citizens’ right to reliable information and enhance public interest broadcasting. Among the proposals for institutional reforms is capacity building of public radio and television, which is currently threatened by funding cuts and politicization of its governing board.”  The study further wrote “as access to information is crucial to social accountability, the study recommends not only the adoption of an Access to Information Law, which is currently on the parliament’s agenda, but also the amendment of the Law on State Secrets as it reinforces a culture of secrecy.”

A 2007 report titled Building Skills for the New Economy examined the labor market in Mongolia and identified three major interrelated challenges—joblessness, informality and skills mismatch. The report argued that “a key constraint for future growth from the perspective of human resources is the failure to provide adequate learning opportunities, school curricula and teaching for producing the skills that are in high demand. But even if the supply of skills and labor were to be appropriate to market needs, access to productive employment would still be limited by a poor investment climate for firm growth and a social insurance system that generates work disincentives.”

And in 2007, the World Bank Mongolia Office initiated the Mongolia Development Marketplace Program.  Based on the model of competitive grants, 37 innovative projects out of 190 finalists were declared as winners and awarded grants amounting to US$326,000.

Next we look at 2008 and a new forum for deliberation about economic policy.

Prepared in collaboration with Dulguun Byambatsoo.