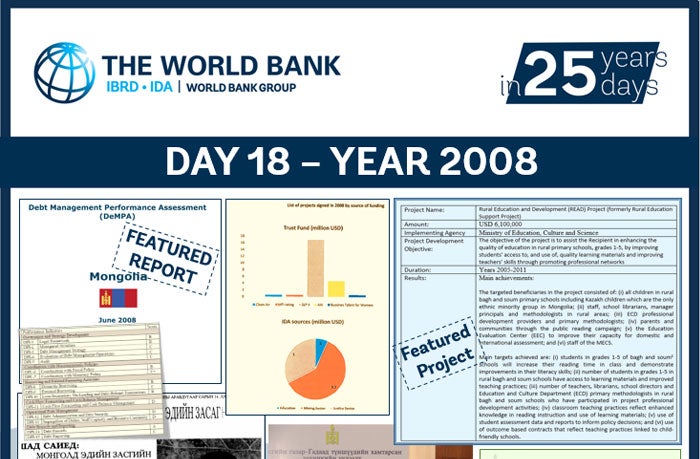 Continuing with our series looking at the 25 year partnership between Mongolia and the World Bank, today we look at 2008, a year that will be remembered by many Mongolians for events both high and low. The low point was the riot that followed parliamentary elections on 1st July, 2008. Five innocent lives were lost and Ulaanbaatar city was under a state emergency for two days and three nights. While Mongolia is rightfully praised for its peaceful transition from one regime to another in 1990, this incident of 2008 will be remembered as the darkest time in the 25 years of democracy.

The high of 2008 occurred after this riot when Mr. Tuvshinbayr Naidan brought home Mongolia’s 1st ever gold medal from the Beijing summer Olympics. I will never forget the sight of people waving our national flag, gathering in the Central Square and cheering with exhilaration.   The World Bank’s Country Director, David Dollar, also celebrated this historic occasion, noting that “The event was important enough to get rival political parties to shake hands and share the pride.”

The year 2008 also brought some important highlights for Mongolia’s partnership with the World Bank. A multi-stakeholder forum called the Economic Policy Conference was held in 2008, and this was right time for Mongolia. According to Mr. Bayartsogt, the Minister of Finance at that time, Mongolia’s foreign reserves had reached US$1 billion and economic growth had taken off since 1990. The mining sector was expected to grow rapidly, and an increase of foreign investment was anticipated, yet the country was facing economic challenges. The conference, which was suggested by the World Bank and accepted by the new Government established in 2008, sought to bring policy makers, researchers, investors and government officials together to generate a discussion on the current economic situation, to consider areas of improvement in regard to strengthening foreign investment, and to exchange international best practices in mining sector development.  A high level delegation visited Mongolia to participate, including Justin Lin, Chief Economist of the World Bank, Yegor Gaidar, former Prime Minister of Russia, and Jim Adams, World Bank Vice President for East Asia and the Pacific.  The meeting became a regular event from 2009 onwards and laid the groundwork for what would later become the Mongolia Economic Forum, now led by non-government organization. Creating a platform to discuss national level issues was an important step forward for Mongolia. Mongolia has a proverb “It is better if we discuss all together”.

In the same year, the World Bank endorsed several new projects funded by IDA and trust funds. The Mining Sector Institutional Strengthening Technical Assistance Project (MISISTAP) aimed to strengthen the capacity to manage mining revenues and develop economic and sector policies, to improve regulatory capacity to manage mining sector development, and to developing the capacity for management of state equity.  An Enhanced Justice Sector Services Project was also approved that year.  While the startup was difficult, the project would ultimately support public legal information and legal advice, and improved the quality and content of legal education in Mongolia.

Many of the development projects under implementation in 2008—Sustainable Livelihoods II is an example—show a pattern, beginning with a pilot and expanding to nationwide replication, adjusting to Mongolia’s changing needs and circumstances in a timely manner.  Like light through a prism, the World Bank’s partnership with Mongolia was becoming a rainbow, reaching the most needed sectors and areas of development.

As 2008 wore on, the news from outside of Mongolia became more worrisome. The Mongolia Quarterly for October cautioned:  “The recent worsening of the financial crisis in the US and the contagion to the world real economy are adding pressures for Mongolia to address macroeconomic imbalances. In particular, the fall in copper prices and the shortage of liquidities worldwide will imply a slowdown of global economic growth, lower copper prices, and reduced FDI. The implications for Mongolia—a larger current account deficit, much lower government revenues, and continued large investment needs—will pose significant policy challenges for the new government to maintain growth while lowering inflation…. Fiscal space should be kept for a targeted social safety net to protect the most vulnerable.”

Next we look at 2009, when the global financial crisis turned Mongolia’s growth negative for the first time in 16 years.

Prepared in collaboration with Jim Anderson.