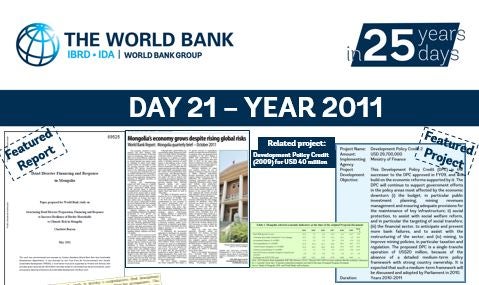 In our review of the 25 years since Mongolia joined the World Bank, 2011 stands out as a year of recovery, and that is an understatement.  By the beginning of 2011 the economy had stabilized and our economists returned to a quarterly format for publication of the economic updates.  The January Economic Update noted the strengthening of the economy:  For the year as a whole, real GDP grew 17.5 percent, the fastest rate for any country in the world. And while many mineral exporters were riding the wave of high commodity prices, few matched Mongolia’s investment boom, with FDI more than quadrupling in only a few years.  A 45 second animation showing FDI and GDP for extractives exporting countries makes clear how remarkable Mongolia’s second, synchronous, wave of FDI really was.

By year’s end, exuberance about the rapid growth was joined by concerns.  A blog on the economy’s overheating cautioned about the rising inflation and the need to stick to the Fiscal Stability Law (FSL), “landmark legislation passed with overwhelming majority in Parliament in 2010.” The FSL contains three fiscal rules to save windfall mining revenues, avoid over-borrowing and restrain over-spending.  The author wrote: “Our advice? With global risks continuing to grow, China’s growth slowing down, mineral prices down, and an economy which is overheating, it would be wise to start implementing the spirit of the fiscal rules now. Because one of the key lessons of recent times is that moderation needs to be applied during the good times, and not be postponed to another day. That day could bring clouds to Mongolia’s eternal blue skies.”

The boom that was underway made clear that mining would play an increasingly important role in Mongolia’s economy, yet Mongolia was not prepared to take advantage of the vast mineral deposits.  In addition to questions about management of the revenues, other fundamental challenges presented themselves:  Does Mongolia have the infrastructure necessary to support a mining led economy?  Does Mongolia have the necessary energy and water management systems?

The Mining Infrastructure Investment Support Project (MINIS) sought “to facilitate investments in infrastructure to support mining and downstream processing activities, regardless of funding source, and to build local capacity to prepare and transact infrastructure projects.”  The project would receive additional financing a few years later from AUSAid “to support the proper management of the precious groundwater in the southern part of Mongolia and the proper development of water supply to meet the rapidly growing water demand, primarily from the mining sector.”

The booming economy and the previous year’s dzud continued to draw people to Ulaanbaatar, bringing better lives for many, but also externalities. A study on health impacts from air pollution built on earlier work, but went further in assessing the costs and benefits of abatement options.  The report opened: “Ambient annual average particulate matter (PM) concentrations in Ulaanbaatar (UB) are 10–25 times greater than Mongolian air quality standards (AQS) and are among the highest recorded measurements in any world capital.”  It called for “well-coordinated framework for pollution abatement in Ulaanbaatar—one that relies on best available scientific and economic data, that involves its citizens and shares information with them, and continuously updates urban air quality analysis, such as the one presented in this study, based on new information as it becomes available.”  The groundwork had been laid for a new project to be approved the next year to help reduce, albeit not eliminate, air pollution in Ulaanbaatar.

Several analyses focused on the challenges facing Mongolia’s public sector.  A review of policy options for pension reform identified a number of design weaknesses in the current pension insurance scheme and needs—and policy options—for reform in response to changes in the Mongolian economy.  A review of support to the justice sector outlined the many achievement since the transition from socialism, but noted that “reform gaps exist and public trust in the justice sector is lacking. Critics continue to point to weak and uneven decision making capacities of prosecutors and judges, despite more than a decade of intensive donor support for their training.” The report highlighted some priority areas for the next stage of justice sector reforms. A 2011 study of the political economy of public investments asked: “Why do politicians distort public investments? And given that public investments are poor because presumably that is what is politically rational, what types of reforms are likely to be both efficiency improving and compatible with the interests of politicians?”  The paper argued that there was an “incentive to over-spend on smaller projects that bring benefits to specific geographical localities and to under-spend on large infrastructure that would bring economic benefits to Mongolia on the whole.”

Next we look at 2012, an election year and a year of newfound creditworthiness.

Prepared in collaboration with Tungalag Chuluun.