Three key lessons from the 2004 Tsunami 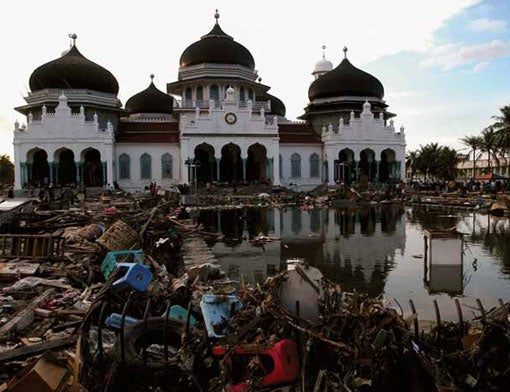 I began my professional career as a sub-district and district level administrator in India-a position that makes one responsible for pretty much everything- from making sure the water comes out of the taps and the garbage is collected in the morning to helping pull accident victims out from horrific accidents and facing down stone-pelting mobs. This early experience of being thrown into the deep end of the pool gives me a somewhat pragmatic sense of perspective and equanimity. But I still recall the horror and overwhelming grief that I felt when the full impact of the 2004 Tsunami started becoming clear. In Indonesia alone approximately 220,000 people lost their lives.

Apart from Indonesia, many lives were lost in Sri Lanka, India, and Thailand, but the eﬀects were felt around the globe: Deaths recorded as far away as Somalia, Seychelles and South Africa. Sweden and Germany lost hundreds of their citizens who were visiting the region. The Lancet estimates that “around 1·8 million people were displaced and about 460 000 homes damaged or destroyed. Even a decade on, many of those figures are still semi-provisional. It was just too big to ever assess the full truth.” These numbers do not even begin to convey the death and destruction on the ground, the grief of devastated families split apart with livelihoods destroyed and countless children rendered orphans.

The World Bank, along with several global partners, contributed to the recovery and reconstruction efforts in Indonesia, for example, by establishing the Multi Donor Fund for Aceh and Nias (MDF), that managed around $655 million to rebuild 20,000 earthquake-resistant homes, 3,850 km of roads, 1,600 km of irrigation canals, 677 schools, 500 town halls, 72 clinics, 8,000 wells and clean water sources, as well as more than 1200 sanitation units, among others. Yet, mere physical reconstruction and international support in Aceh were not the only ingredients needed for a sustained recovery. After a separatist conflict that had engulfed Aceh for three decades, a peace agreement was reached in 2005, and a special autonomy status was granted to the province. Aceh’s story is also one where a large disaster has become an opportunity to rebuild communities in a safer and resilient way, not only to face future natural hazards but also to reduce risk of violent conflict and the impact of external shocks.

Ten years on and looking back, the 2004 earthquake and tsunami has transformed the global disaster risk community for the better. We can think of three main lessons that we have taken from Aceh.

The first is that putting resources into hazard mitigation and emergency preparedness is perhaps the best investment a country can make. The evidence is unequivocal. By one estimate a dollar invested in early warning systems can save $2-14 of avoided losses. Since the disaster, a sophisticated early warning system has developed costing over $400 million across 28 countries. With 101 sea-level gauges, 148 seismometers and nine buoys, the Indian Ocean Tsunami Warning System can send alerts to countries’ tsunami warning centers within 10 minutes of a quake. The Government of Indonesia gained significant expertise in disaster management and preparedness, leading to the establishment of the National Agency for Disaster Management (BNBP) which has emerged as a tremendously capable institution.

The second relates to the importance of building strong institutional coordination and adequate financing mechanisms. At the outset of the post-Tsunami period, the crisis situation quickly became a testing ground for the existing institutions and the governance. The Government of Indonesia rapidly established the Aceh-Nias Rehabilitation and Reconstruction Agency (BRR) with a robust mandate to prioritize and coordinate efforts, and to deliver results.  This not only ensured that funding met felt needs, but also was in line with global good practice in ensuring accountability and transparency.  Strong commitment and ownership by the top leadership went a much beyond what the international community could do by themselves, and proved that relying solely on international funding is not possible, nor desirable.

The third lesson is the need to put communities at the center of the reconstruction process. In Aceh, community-led recovery through participatory mapping of risks, local investment planning, and owner-driven reconstruction of housing, enabled local communities to thrive again, and in the long term, become more resilient and safer. The enormous human toll compounded with catastrophic damages threatened decades of economic development gains. Putting the communities front and center in the planning and implementation of the reconstruction process ensured their full ownership and higher satisfaction on outcomes. This approach has now been implemented successfully in several disasters since 2004 including in Pakistan, India and Sri Lanka.

We live in a world where, unfortunately, the losses from disasters show an increased trend. These and other lessons from the tragic events of December 26, 2004 and its aftermath can serve to ensure that the impact of future disasters can be mitigated and lessened. Another lesson is that, after the emergency phase but before any reconstruction begins, create detailed maps of the affected area from satellite imagery and aerial photos and make this information available to those involved in reconstruction activities.

It is good to read this post by the lead author of the impressive Safer Homes, Stronger Communities, and to see the three lessons he has selected.
The first, better disaster preparedness, pays deserved respect to Indonesia's BNPB. I would like to suggest another initiative that Indonesia shares with India, the Disaster Resources Partnership, that I believe will become a significant model, not just for the construction industry, but hopefully also for the financial sector as well. One could well add a comment on the profound impact the tsunami had on the Feb 2005 Hyogo meeting.
Abhas Jah's second lesson on strong institutional coordination and adequate financing mechanisms: it is indeed good to see the World Bank giving recognition to Pak Kuntoro and his team at BRR.
The third lesson on putting the community at the centre, was somewhat of a struggle. BRR agreed to it in principle, but it was not easy to achieve. The first efforts in village-based planning, after a successful village-based land-mapping exercise, were put aside as being too slow. First efforts with the replacement kecamatan (subdistrict) reconstruction planning and management system did not get the necessary engagement at any level - the community, the local government, BRR or donor community. And it took two more years before the system could be considered a success, with thanks to WB, AusAID (now DFAT), ADB and others. And yet the idea was not really new, as the planning in Aceh and Nias was an effort to apply lessons from the earlier success in Gujarat India.
Thank you Pak Abhas