Wasted years: Why do Indonesian children end up learning less? 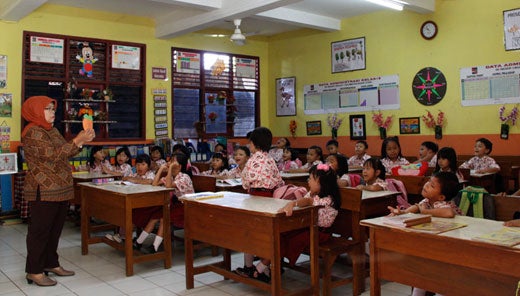 Now that the dust has settled around the PISA results we have been thinking about the reasons behind Indonesia's poor showing. For those of you who haven't seen them, Indonesia ranked lower than all participating countries except Peru in mathematics and science, and was fifth from last on reading. Perhaps more worrying were the low absolute levels of learning reported for 15-year-olds. In mathematics, three-quarters of students were rated at or below the lowest benchmark – a level associated with only rudimentary levels of proficiency and a lack of higher order thinking skills.

One reason for this may be how little time Indonesian students spend in school. In grades 1 and 2, Indonesian children spend only three hours a day at school - 555 hours a year - compared to the OECD average of 774 hours. That is also low compared to some other countries in East Asia; in Vietnam, children in grades 1 and 2 typically receive around 787 hours. Moreover, these short school hours are not complemented by increased after-school coaching. In the latest PISA, around half of Indonesian students reported attending out-of-school lessons, slightly higher than the OECD average, but low for East Asia.

The upshot is that by the time Indonesian students take the PISA at age 15, they have spent almost two years less in school than the average OECD student. This might be why PISA reports that Indonesian students are the happiest in the world, but it may be a factor driving their low levels of learning. Studies point to the importance of instructional time in determining how much children learn over the course of a school year(see here and here). In Indonesia, a recent study showed that a longer school year reduced grade repetition, increased educational attainment, and increased employability and labor market earnings.

Rough estimates suggest that increasing instructional time has the potential to substantially narrow the learning gap between Indonesia and OECD countries.We use PISA estimates of the learning gain from an additional year of schooling for Indonesia (controlling for gender and socio-economic status) to calculate the potential gain. Increasing instructional hours to the OECD average could increase learning by about a third of a standard deviation – roughly equivalent to shifting the average Indonesian student up a level on the PISA international proficiency benchmarks. While this ball-park estimate is relatively large, it would be even larger if school quality was better. For example, the gain would be twice as large if levels of quality in Indonesia were similar to OECD countries. Nevertheless, even with existing levels of quality the increased learning could significantly reduce the 100-300 years that Harvard professor Lant Pritchett estimates Indonesia needs to attain learning levels similar to OECD countries.

The purpose of this kind of calculation is not to identify a ‘magic bullet' that will single-handedly solve low education quality. Increasing instructional time alone may not be the answer; Thailand has above average school hours, but ranks relatively poorly in the PISA assessment. Getting the most out of increased school hours will depend critically on improving education quality, by, for example, increasing time-on-task during lessons, raising teacher effectiveness, and providing schools with adequate funding.

The good news is that as part of curriculum reform the Indonesian government has started to take action on school hours. The roll-out of the new curriculum will mean that children spend an extra 120 hours in school per year. With these changes the average student will spend 7 thousand hours completing the basic education cycle, compared to the OECD average of 7.5 thousand hours. And the additional instructional time will be on mathematics and reading – areas where Indonesia lags behind other countries.

The effect of these increases in learning time will depend critically on the quality of the new curriculum and how well it is implemented. Only time will tell if changes to the curriculum will improve education quality but the initial signs are worrying. Despite the fundamental change to teaching implied by the new curriculum, teachers have been complaining about the inadequate training they have received. Unless the curriculum is effectively organized to cover the skills students need and teachers are provided adequate support to deliver it, the opportunity of increasing learning by extending the school day may be lost.Millions of Indonesian school kids will be hoping that more hours in the classroom will mean more learning instead of just less time to play. Great article! I'm doing a research project on Indonesia's human development and would love to sit down and chat sometime if you could spare the time Mr. Al-Samarrai. Do you have an email I could contact you at? Thank you for the help.