Which region in the world has the smartest kids? According to the OECD, it’s East Asia


With the release last month of the latest PISA (Program for International Student Assessment) results by the OECD (Organisation for Economic Co-operation and Development), it is apparent that many of the highest achieving students in the world are in East Asia.

Just as in the recently released TIMSS (Trends in International Mathematics and Science Study) results, Singapore leads the world in every subject in PISA, outperforming other economies and countries by a significant margin. Students in Singapore perform at a level that is up to two years ahead of their regional and OECD counterparts in science, mathematics and reading. Moreover, almost all Singaporean students have reached a basic level of proficiency or higher. And they just keep getting better, having significantly reduced performance below basic proficiency.

Japan also outperforms most participating economies in science, mathematics and reading. However, its score in reading has declined since the last round. Still, as in Singapore, 90% of students have reached a basic level of proficiency or above.

PISA is a triennial international survey launched in 2000 which aims to evaluate education systems worldwide by testing the skills and knowledge of 15-year-old students. In 2015, over half a million students in 72 countries and economies were assessed in science, mathematics and reading.

Overall, East Asian economies dominate, with 7 of the top 10 entries. 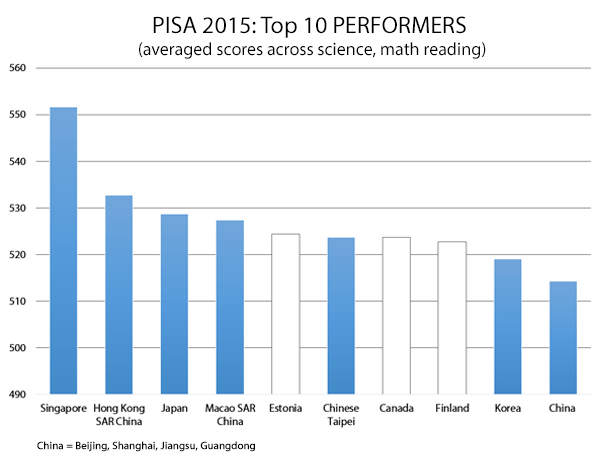 In science, not only do the high income East Asian countries (e.g., Singapore, Korea, Japan, Hong Kong SAR China) dominate, but, for the first time, Vietnam enters the top 10 as well. This is quite an accomplishment for a relatively lower income country. Vietnam’s performance continues to be significantly above average for its income group and above many high-income countries. Its science score remains about a year above the OECD and regional averages. 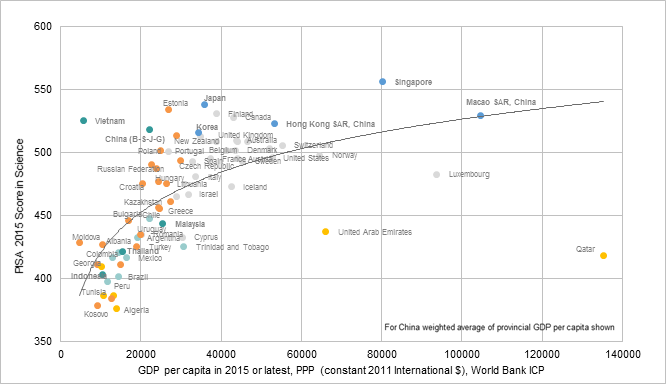 Prior to 2015, Shanghai was the sole representative of China in PISA and demonstrated exemplary performance. This has been well documented. This year four provinces and cities participated in PISA–Beijing, Shanghai, Jiangsu and Guangdong. Their performance was well ahead of the OECD average.

But there are challenges

Other East Asian countries do not fare as well. Indonesia, Malaysia and Thailand participated in PISA 2015 but all three are performing below the level expected given their level of income. The performance of students in each subject continues to lag the regional and the OECD averages by 2 to 3 years. About 50% of the students are below the basic proficiency level, making them almost functionally illiterate when it comes to 21st century skills. This is despite having completed nine years of elementary and high school.

In Thailand, scores in science and reading declined significantly while scores in mathematics have decreased slightly. While Indonesia has seen significant test score improvements–science test scores have increased by roughly 0.7 school years and in reading Indonesia improved by 26 points between 2000 and 2015 (371 to 397)–the overall level of performance is still well behind OECD and regional averages.

East Asia’s success is no miracle, and no secret at all. It is a result of hard work and good policy.

As Korea did many years ago, high performing East Asian countries get the fundamentals right, starting with smart investments in basic education and scaling up effective early reading programs. Cost-effective use of private provision with public finance helps make up gaps. And while building up the basic education system, innovative financing of higher education is used, such as income contingent loan programs whereby tuition and other costs are financed through student’s future income. Skills programs for those going beyond primary schooling benefit from strong links to industry and employers. High performers also make good use of loans from development organizations.

Vietnam’s success is due to several factors. In addition to prioritizing national budgets towards education, parents are more likely to be involved in their children's academic lives, and help or fundraise at schools more often. Teacher performance is monitored more, and there's a higher emphasis on student achievement than in other developing nations. Students are more focused and take their schoolwork seriously. They are less anxious about math, and more confident about how they are going to use it in the future.

Vietnam also gets the fundamentals right. The country has benefited from early investments in both school and teacher quality. Minimum quality standards for schools and standards around content knowledge, skills, and behavior are enforced. Teachers display a high level of professionalism. The country emphasized the importance of standardized assessments of literacy and numeracy. The advantages start early, with research showing that Vietnamese children slightly outperform those in other developing countries even by age five.

The lessons of success should come from the region first. We aim to distill these lessons through a regional study and a conference in March in Indonesia. Harry, this is a very enjoyable read. It is a good summary of the fundamental issues that have been addressed by the high performers in education in East Asia. However, you downplay the role of school, teacher, and system accountability as a factor in the path to success. Do you think that the limited success experienced by Thailand is related to low accountabilty? What do you think are the factors blocking high performance in Indonesia, Malaysia and Thailand? Inversely, do you think that accountability played a role in the most successful countries?

Gustavo, thank you for the comment. I think that system accountability is very important in East Asia. There might not be a lot of public access information as an accountability measure, but authorities in top performing countries are held accountable and so are the providers. One of the factors that leads to limited success in other countries is insufficient implementation of stated accountability policies.