For Better Returns than the U.S. Stock Market, Invest in Education

We all know that education is a sound investment, but just how solid is it? We set to find out, with a comprehensive review that covered trends and patterns from a database of 1,120 estimates in 139 countries spanning nearly seven decades.

The result—a 9 percent average individual return for one extra year of schooling globally, or in other words, 9 percent increase in hourly earnings—is staggering, especially when compared to other investment options available. One such investment many people choose to invest in are United State stocks and bonds. However, when we learned that investors over a five-decade period from the mid-1960s collected only a mere 2.4 percent return, investing in education looks even more solid.

Our literature review[i], which was published this month, found several key take-aways that we believe can offer useful guidance to policymakers and education practitioners alike: 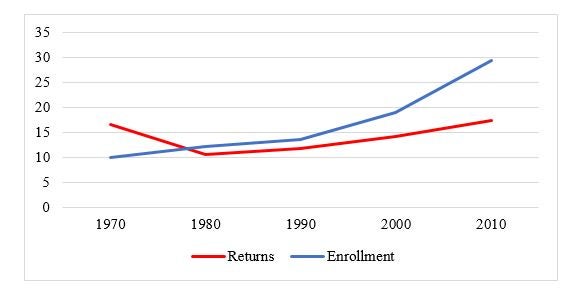 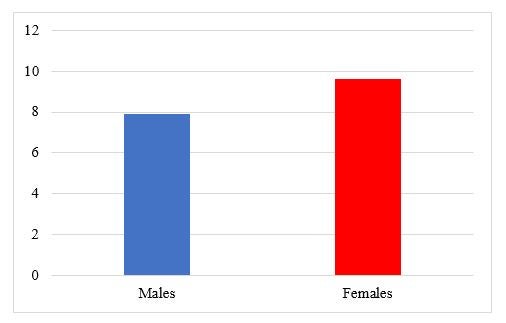 Overall, despite the massive influx of new students into the global education system in recent decades, education remains a solid investment. Even as more graduates “flood” the market, being a skilled worker has become ever more vital, and human capital continues to be highly valued.

Recent research indicates that the remarkable social rates of return reported above are still under-estimated because of the omission of several externalities. By putting a monetary value on just one externality of education – reduced mortality – the social rate of return to investment in one extra year of schooling in low-income countries skyrockets to 16 percent , relative to 11 percent based solely on earnings differentials.

We believe that these figures provide an important guide for policymakers tasked with allocating education budgets. As the data shows, countries that have yet to achieve universal primary education should prioritize basic education, while countries with low rates of girls’ enrollment should focus on educational opportunities for women . And in countries where students struggle to pay for higher education—despite the high returns for investment that they would later enjoy—policies need to focus on tuition assistance and other forms of support that would enable poorer students to enroll in tertiary education.

When in Doubt, Estimate!

These estimates are important, but countries that lack more specific information about their own education systems should invest in collecting country-level data. There is no substitute for granular data, which provides critical clues for where to best invest and focus precious resources.

This work is ongoing, with upcoming new estimates on the effects of the quality of schooling. Although there are plenty of macro-level studies in this respect, micro-level analyses on the returns to investing in specific school quality inputs – like student-teacher ratio – are still emerging.

The rate of return patterns found in previous analyses are upheld and reinforced by our research. When taking into consideration efficiency in the use of resources, spending on human capital is one of the best investments a country can make in its future.

This blog draws from research conducted jointly by Prof. George Psacharopoulos and Harry A. Patrinos. Education in its two major parts: sciences and social sciences are important but connecting human hearts with the OTHER by human feelings and love is through educating the correct knowledge of the different cultures and traditional norms not self schemata about them is the real bridge that may create love and peace between all humans. Both the Western world children and the Eastern world children need badly how to appreciate the OTHER who will not come to take my resources and richness for their is the Lord of the Universe that grants all the tidings to each and every creature He created, not just the human beings.

Education is not only a good financial investment.  It has important social benefits, not least of which is increased understanding.  Thank you for your comments.

"Education is the most powerful weapon that can be used to change the world." Nelson Mandela said. It should be a visionary goal to work towards having better education with equipped resources across the world to ensure we have a better coming generation and that progress is advancing. Leaders across all spheres must ensure that partnerships and commitments to do with education should be of priority and avoid gender discrimination providing equal opportunities to all. Women play a big role mostly in bringing peace and upholding the family institution thus, more opportunities for women especially in tertiary institutions should be orchestrated. Countries across the world should ensure higher learning institutions are sufficient with resources and provide equal enrollment even to the disabled and accountability should be key focusing mostly on devolving education and encouraging innovation and research
Child marriages and major problems affecting children like trafficking will be curbed if education is encouraged as most of them will be enrolled to a school programme. Lastly,Education skills can never be lost and can bring people from different backgrounds,race, color, gender and sex to achieve a desired goal thus making this world a better place for coming generations.

Thank you for your comments.  The Nelson Mandela’s words still ring true.  Among the major benefits of schooling is delayed marriage and larger financial returns to women’s schooling.

Great article ......Thank you so much keep posting.
http://www.digitalpaathshala.com

@Harry A Patrinos, Thanks for sharing the article ,
Yes, School Education is indeed a great investment for the family / community / country as well, as it develops critical thinking and the involvement at the personal and professional level is enormous.
The School Education with Cognitive Learning improves knowledge eradicates rote learning and academic bulimia thereby Inclusive Economic growth.
Education is Vital to achieve all the SDGs (Sustainable Development Goals) and thus Quality Education to ALL when focused with the investment of time and money takes the country's economic growth to great heights
Hope you will agree with me, Thanks for your time.