The Educated Russian’s Curse? Returns to Education in the Russian Federation since the 1990s

Wisdom.. comes not from age but from education and learning - Anton Chekov

Because of a strong literary tradition and a deep commitment to education, Russia had a highly educated population by the end of the 20th century. Today, nearly two-thirds of 25 to 34 year olds have completed post-secondary studies, along with just over half of 55 to 64-year-olds, well above the OECD averages. In terms of learning achievement, the picture is a bit less flattering. Russia’s 4th grade students are ranked highest in the world on reading scores, but by the 8th or 9th grade, Russia is ranked about the same as the OECD average and lower when collaborative problem-solving skills are taken into account. Nevertheless, Russia can still be regarded as one of the most educated nations in the world.

Higher education levels usually translate into higher productivity and higher earnings. However, Sofia Cheidvasser and Hugo Benítez-Silva found very low returns to education in Russia in the 1990s, only about 5 percent (compared to the global average of 9 percent), even at a time when the market in Russia was opening up. If an education added such little value in terms of wages at that time, they posited that this might have given educated Russians a reason to emigrate.

The World Bank 2019 report How Wealthy Is Russia? found that human capital accounts for only 46 percent of Russia’s total wealth compared with an OECD average of 70 percent. Average per capita human capital wealth in 2014 was about US$500,000 for the OECD, five times higher than in Russia. Although per capita wealth was growing 10 times faster in Russia than in the OECD, the gap in the relative levels of wealth was still very wide.

Were there really very low returns to education in post-Soviet Russia? 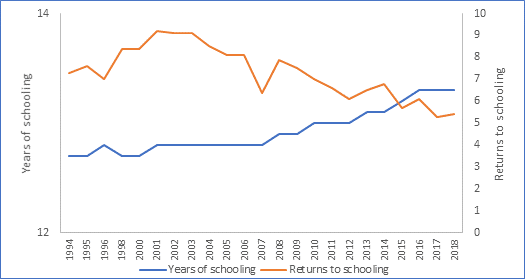 The returns peaked in the early 2000s (at almost 10 percent) followed by a downward pattern (returns of 5.6 percent by 2018). The returns to schooling in Russia are now much lower than the global average. On average, an additional year of education yields only a small – and declining – increase in wages. More than one-third of the labor force possesses a post-secondary qualification. The extent to which the declines are due to potential “over-education” is worth investigating. In this regard, higher education may have reached an expansion limit causing a decline in educational premiums. But private returns to education are three times greater for higher education compared to vocational education. It could be that vocational schooling is reducing the overall return to schooling. Thus, there is a need to investigate the labor market relevance of vocational education. Female education continues to benefit from being a government priority. Future research could also look at the variations in returns across regions. Also, recent school closures and the ongoing COVID-19 pandemic will reduce the earnings of all current students once they reach the labor market, though higher education graduates can be expected to suffer the least. Because of these declining returns, it may be necessary to explore ways to increase the productivity of schooling at all levels.