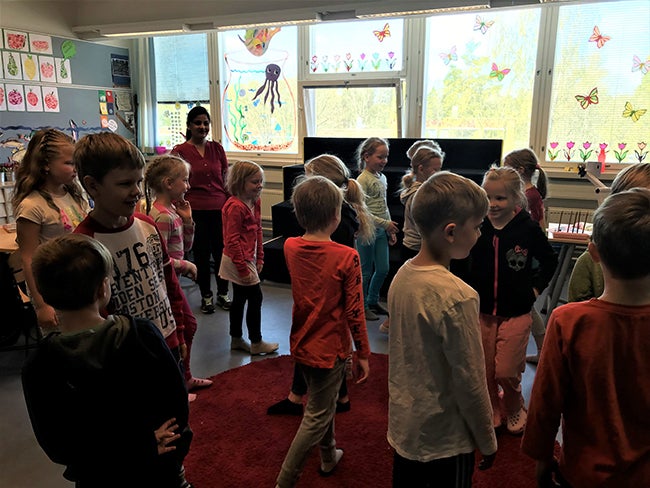 When Finnish students scored amongst the top in the Programme for International Student Assessment (PISA, a very influential international assessment administered by the OECD) in 2001, many people in the field of education were intrigued. How could this small nation, which had not been characterized by surprisingly high results in the past, be on the top? Finns themselves were surprised. When students continued scoring above expectations year after year, educators and leaders all over the world began studying the country as an example of how to build effective education systems. Not only do students consistently attain high performance, but the achievement gaps between pupils and regions are amongst the narrowest in the world. Equity with quality.

Many have embarked in “PISA tourism” and travelled all the way to Finland to visit schools and talk to teachers, students, and ministry officials. Me and my team also visited Finland recently; it is an incredible thing to see. The system defies many of the conventional rules: there is only one standardized test in the end of upper secondary, short school days, scant homework, flexible curriculum, full teacher autonomy, big focus on arts and sports. And things seem to be working! It is tempting to emulate it. Some people may see visits to a country like Finland as an attempt to get ideas -best practices- to imitate and adopt in other settings. In fact, when I was tweeting about our most recent visit, some people wondered, with a certain degree of cynicism, what was the point of looking at Finland when the realities of the countries the World Bank works with are so different?

Imitating public policies is obviously wrong. For other countries to copy what Finland is doing today on education could be a mistake. Among many reasons, the Finnish system relies on high-quality, extremely well-trained and committed teachers for it to work. Since most education systems lack this critical ingredient, it is not possible to directly implement current Finnish practices.

So, even if understanding how the Finnish system works today is useful, the biggest lessons we can take from Finland are not derived from the status quo, but from an understanding of the path it took to evolve from being average in the 1970s, to being a star performer today. What is very useful to understand is Finland’s journey.

How did that path look like? Before 1968, Finnish students were sorted into academic grammar schools and work-oriented civic schools after their four years of primary education. At the end of the 60s, a new legislation and a new national curriculum were created, merging these two tracks into a 9-year comprehensive school including 6 years of basic education and 3 years of lower secondary education (today, many countries in Africa have 9 years of compulsory education). The comprehensive school was implemented from 1972 onwards, starting in the most northern Finland, Lapland. The Government knew that education reform would take time, and planned for the comprehensive school reform to reach southern -more populated- Finland by 1978. During this time, teacher education was reformed radically to equip teachers with competences needed to take greater responsibilities, such as curriculum development and student assessment.

Until the early seventies, teacher education was part of teacher training colleges with varying levels of rigor. Teachers had to follow the curriculum in a disciplined manner and school inspectors verified that this happened. In 1974, a reform took teacher education from teacher-training colleges to universities. In 1979, it was made even more rigorous, making a Master’s degree a prerequisite for teaching. Teachers who were already in service received extensive professional development, focusing on how to make the school an enriching experience for the student. Only 10 years later, when the reform had already expanded throughout the country, did the country start experiencing a radical change in the perception and the prestige of the teacher career, and teachers started receiving increasingly more autonomy. At the beginning, decisions, regulations and orders regarding comprehensive schools were highly centralized. This changed in 1985, when a general decentralization process increased freedom and responsibilities of municipalities in multiple areas, including education policy. By 1994, the National Board of Education designed a national core curriculum which gave only broad aims and content guidelines for teaching different subjects and the municipalities and the schools set up their own, local curricula. Inspection and control systems made sense in their own time and only after the reform did they ceased to exist in 1991. More than 20 years later.

True, teachers in Finland have substantial social prestige. But it took a decade for this to happen after the whole system to prepare teachers was revamped.  True, the system is highly decentralized and teachers are trusted and not closely centrally monitored.  But it took about twenty years of close monitoring before they started giving teachers freedom and autonomy. Although there is a myriad of lessons to be learned from the modern Finnish education system, the journey they took to become one of the world’s most high performing education systems should neither be underestimated nor forgotten. Good article,thank you for the information.

True, the system is highly decentralized and teachers are trusted and not closely centrally monitored.

A great system, but can’t have one receip for success .