Second Chances: Giving Dhaka’s slum children an opportunity to go back to school

Deep in the winding alleys of a Dhaka slum, business was booming. Rafiq, an entrepreneurial 12-year-old, was selling snacks out of a makeshift food cart – and his customers couldn’t get enough.

Rafiq’s business chops were impressive. But this budding entrepreneur belonged in a classroom, not behind a food cart.

“My father moved to Dhaka to drive a tuk tuk when I was in third grade,” he said, insisting I buy more chotpoti, a popular Bangladeshi snack.

“After we moved to the slum, I started working and never went back to school.”

Rafiq’s story is not uncommon. As more households migrate to the Dhaka in search of work, the influx of migrants has overwhelmed the city’s infrastructure. When urbanization is ‘messy’, the growth of a city is characterized not by skyscrapers, but by sprawl and slums.

But in a country where half the population is below 15, the poor state of education in urban slums is particularly alarming. Children in slums are at higher risk of not enrolling in primary and secondary school, and when they do, are at a higher risk of dropping out. The overall gross enrollment ratio in slums, for instance, is 10 percent lower than the nationwide average, while the net enrollment ratio  is 15 percent lower. In another blog, we explore how poor enrollment affects learning outcomes.

Where are the bottlenecks?

A number of factors dampen the demand for education in slum areas – but the financial constraints appear to be the strongest.

First, a recent survey of households with out-of-school children revealed that for 60 percent of families, schooling was too expensive. Education-related expenses (including school fees and private tuition costs) accounted for an estimated 11 percent of household income in slums. In addition, schools in metropolitan areas have to generate relatively more income from students through fees, placing a disproportionate burden on poor families in cities.

Second, bustling urban economies create more employment opportunities for everyone, including children. In addition to the direct cost of education, the opportunity cost of a child attending school (and not working) is much higher in urban areas.

Like Rafiq, almost half of 12-year-old boys are pulled into some form of income-generating activity, and girls start even earlier. When asked, a quarter of out-of-school children worked for money during the week prior to the survey (compared to only 2 percent of school going children in the same households).

To compound these demand-side constraints, the supply of schooling remains woefully inadequate. For instance, there is one primary school near the entrance of a slum for every 121 primary school-aged child living in a slum and one secondary school for every 678 children. In addition, these schools cater to children both slum and non-slum areas. Given that the majority (69 percent) of accessible secondary schools are private institutions, the higher costs put children from poor households at a disadvantage. 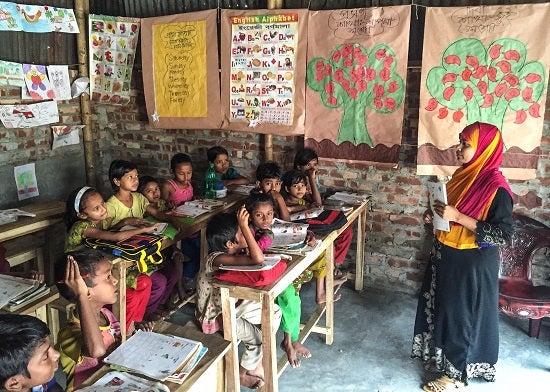 Going forward, Bangladesh will have to address the constraints on both sides.  As with households with children attending school, the survey found that households with out-of-school children had similar aspirations for their children. In both groups, ninety percent of parents wanted their children to complete at least secondary school.

The implications from a policy perspective are clear. Easing financial constraints and improving access can go a long way in improving school enrollment among under-served slum children.

Where do we go from here?

While non-profits have long been at the frontline of service delivery in slums, much remains to be done – and it will require a team effort.

The IDA-financed Reaching Out-of-School Children (ROSCII) Project has been providing second chance education to children in rural areas, and has achieved impressive results. With the technical assistance of Save the Children, It is now refining its model to reach children urban slums, aiming to address both demand and supply constraints.

Improving supply means making classrooms more accessible to children. To accommodate higher rents in urban areas, temporary ‘Learning Centers’ are established in clusters inside the slums, so they are closer to the households. Using flexible hours to accommodate the needs of working children, these centers deliver formal primary school curriculum through an accelerated 3 years model.

To stimulate demand and compensate for the opportunity costs, learners in these centers receive a higher educational allowance higher than those in rural areas, alleviating the financial constraints for poor families.

About 3,000 children are now being supported in 120 Learning Centers in 20 Dhaka slums, and the program will be scaled up further to support 50,000 children living in slums in the coming years.