The Six A’s of Quality Education 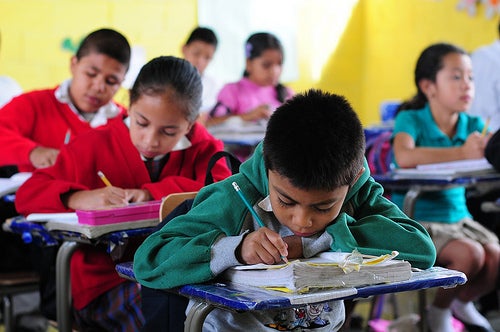 Over the past several decades, developing countries have made remarkable progress in achieving quantitative education targets. Since the turn of the millennium, almost 50 million children around the world have gained access to basic education – and most are reaching completion. But as recent PISA data shows, this is not typically the case for qualitative improvements in education. A persistent learning gap remains for an estimated 250 million children who are unable to read and do math, even after spending three or more years in the classroom.

Education systems reforms are needed in many countries to turn the tide. In a recent article, we propose the following as six necessary components (referred to as the 6A’s) to achieve such reforms:

Successful education system reform requires a combination of institutional factors and structural quality elements. In order to improve the quality of education, countries must enable a benchmarking system to determine current learning levels and future learning aims; provide schools and communities with ownership of their systems; and set up mechanisms to ensure and monitor various responsibilities, all while supporting teacher quality, promoting the importance of ECD, and being mindful of context and culture. Policymakers must consider each aspect of the education system in defining an appropriate reform that will provide an inclusive and holistic approach to improving education outcomes. We appreciate all that points put forward for quality education. Though native language is still under rated at top schools, students understand things better and clear in their mother tongue and this fact remains hidden and uncared.

Excellent summary of the key variables affecting education quality. I downloaded the original paper using the link in the second paragraph; I found it very interesting, especially in the presentation of a new path to education quality. I wish, however, that in the area of assessments the authors had discussed in more detail the use of Early Grade Reading Assessment and Early Grade Math Assessment, which have proven to be extremely effective in promoting the acquisition of basic skills by students in grades 1-3. Paying too much attention to PISA or TIMSS may be too late for many countries where the main problem lies in the early grades. I also would like to recommend paying attention to school leadership, especially the managerial and leadership role of principals. However, these two issues can be easily incorporated into the conceptual framework developed by the authors.

Valid comment. In fact, in our graduate seminars at several universities world-wide (USA, China and Japan), we are including Early Grade Reading Assessment (EGRA) as an important topic. We agree that it is a critical instrument to improve the monitoring of quality of education and eventually accountability in the system. Thank you.

I think this is a very useful article of offers rich insights into what could be done. Of course the ingredients for success in any education system particularly in developing countries include Assessment, Autonomy (often underestimated), accountability, teachers, Early Childhood Education (ECD) as well as culture. We found in South Africa that accountability, attention to teachers and assessment as yielded positive outcomes in the system. The investment in ECD has been well documented and there is enough evidence to suggest that in disadvantaged contexts school must compensate for poverty. The challenge that faces many developing countries is poverty. Compensatory programmes that increases vocabulary and bridges the class divide is pivotal for the succcess of the education system. If there is no catch up in the formative years of schooling the gulf widens in the intermediate and senior phases of schooling. Research suggests that if a child does not learn to read by the age of 8 they will most likely drop out of schooling. There is no point in spending substantial amounts of money in developing education systems if the issues concerning developmental lags are not addressed in the early years. Most children in a developing country come out of homes where there is a limited or no print culture. These children are not read to sufficiently and traditionally education has had very little value in working class homes since many of the adults have not benefitted from education systems. At a global level we have to focus on they young children that enter schools. Irrespective of the sopthisticated mechanisms that are put into place at a secondary level, little progress will be achieved if oral language developing, reading programmes and self esteem issues are not fast tracked through sound developmental programmes. As an individual who grew up in tough neighourhoods I had to fast track my reading programme, self development programme and a number of other areas to advance. The education discourse that I was exposed to me taught me the value of education from secondary school since I wanted to succeed despite the odds. Unfortunately this is not the case for many children who become victims of class.

Dear Sigamoney, Thank you for the comments. You are correct to point out that it is imperative indeed to focus on gaps early on and that early reading is a key outcome. Best regards, Harry

While I personally agree the six A's are important, I wonder whether we should think about them as all necessary or more of a menu countries can pick from. In other words, can a country achieve sufficient improvements by prioritizing 2 or 3 A's or is that not possible?

Ariel, that's a good question. While we believe that all 6 are important, there are different ways to achieve excellent performance and different countries may have different paths. That remains a task for future research. But no system will improve without adequate attention to information -- Assessment. After all, you can't get to where you want to be if you don't know where you are.
Thank you,
Harry

I read these 6 A's with a great interest and I would like to make a little comment on the #4 and #6, which seem to be the key elements for me in education. The key actors are the learners and the teachers. Obviously the latter need quality training to acquire to meet the requirements of good teaching. But once recruited as the best, how many are continually getting trained to update their knowledge? We must bear in mind that our world is undergoing dramatic speed changes with the progress of technologies.So there is a need for adaptation, hence teachers should be trained to follow this trend and feel at ease in their profession of educators.
The other important actor I want to refer to is the learner. The kids who are massively enrolled to comply with the World Bank educational policy in developing countries for example. How effectively can they learn and progress if they are 100 or more (in the worse cases) in the same class with just one or two instructors? When most of them do not speak the teaching language that they have to learn during the 5 first years of school. We can help them learn maybe better if we refer to their first language or their communicative language. Learning make more sense to them because they will feel being part of the process. The experience of Guatemala could be a best practice to extend to other countries sharing the same contextual realities.

Thank you. Teacher policy is important and we need to continuously support teachers to adapt, stay fresh, and keep focused.

These are very important information for the organization and teachers to follow during thier teaching , thanks for sharing with us. We got enough information and we will practically get benefit from your information