A Smarter Way to Keep Teachers in Malawi’s Remote Schools 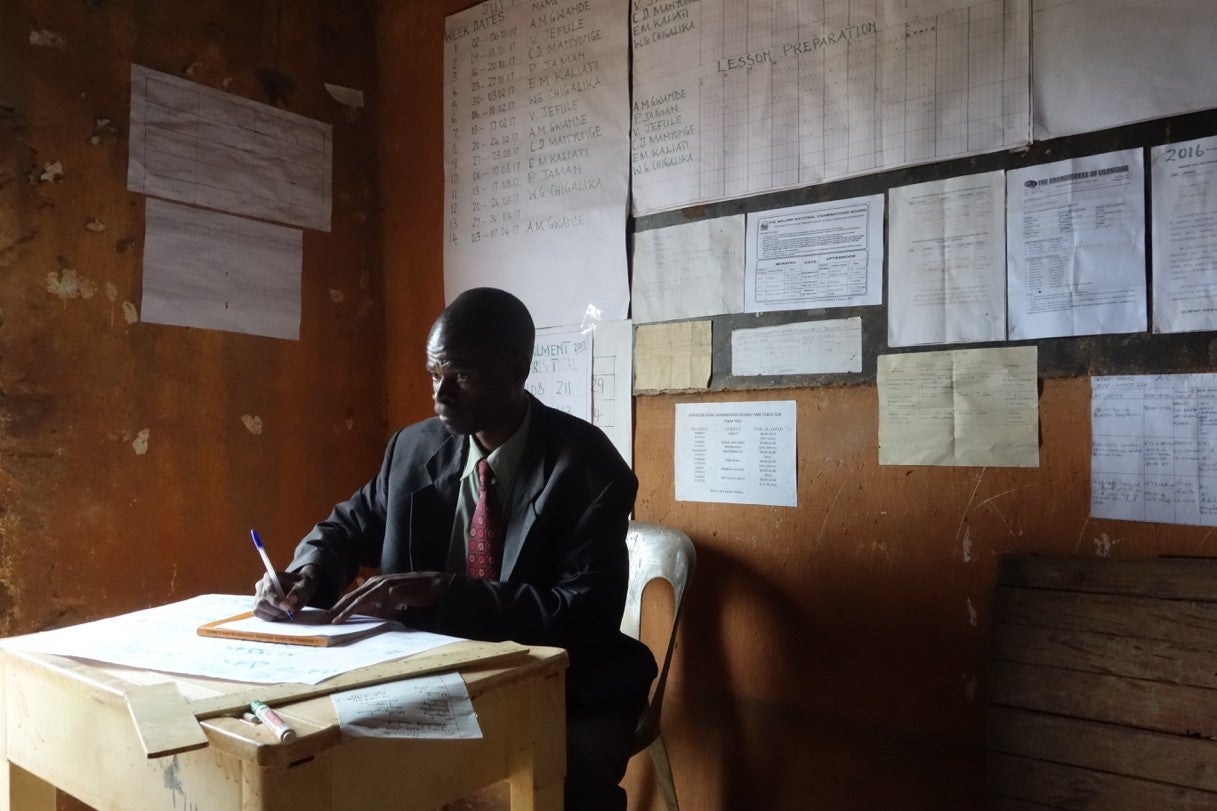 
Alberto Gwande and his students at Khuzi school in Malawi need more teachers. The school is severely understaffed, with only six teachers for nearly 800 students. “I was supposed to receive new teachers last year, but they never came,” recalls Alberto, the headteacher.

Khuzi is 20 kilometres away from Nathenje, the nearest large village with a trading center, and its Pupil-Teacher Ratio (PTR) is 131 pupils per teacher. In contrast, Chibubu school, located four kilometers from Nathenje, has a PTR of 65, while Mwatibu school, located inside the village, has a PTR of just 49. And yet, despite the shortage at Khuzi, it was Chibubu which received four new teachers last year.

Unfortunately, this situation is not uncommon. Malawi spends more than 80% of its basic education budget on teacher salaries, but its 61,000 primary school teachers are very unevenly distributed between schools. Within a single district, school PTRs can vary from below 10 students per teacher to above 1,000 in extreme cases. The variation is highest between remote schools like Khuzi and those closer to towns and large villages, such as Chibubu and Mwatibu. Because remote schools also typically have fewer facilities and poorer students, these staffing gaps exacerbate existing inequities in the system. They also contribute to Malawi’s low learning outcomes. Only 31% of Malawian children who enter primary school complete it, and students perform very poorly when tested: Malawi’s sixth graders placed last in a 2013 regional assessment, and most fourth graders are unable to pluralize the word “mango” or carry out simple additions such as “100 + 20”.

Malawi’s problems are not unique. Although most sub-Saharan African countries have rapidly expanded their teaching workforces in recent years, to keep up with rapidly rising enrollments, many countries struggle to allocate their teachers properly between schools. According to World Bank’s forthcoming regional report, in most African countries at least 20% of the variation in teacher allocations between schools is unexplained by variation in enrollment; in some countries, the figure is as high as 85%. These inefficiencies contribute to Africa’s learning crisis: in five out of seven countries participating in the Service Delivery Indicators (SDI) program, fewer than ten percent of fourth graders could read a paragraph in the main national language and fewer than 20% could read a sentence. The SDI is an Africa-wide program that collects facility-based data from schools and health facilities every 2-3 years. The initiative is a partnership of World Bank, the African Economic Research Consortium and African Development Bank.

A problem of data

The persistent inequities in Malawi reflect problems with the administration of teacher allocations. Until recently, data on the whereabouts of teachers was fragmented and inconsistent between government agencies. As a result, teacher allocation policies have been broad, malleable, and inconsistently enforced. All schools with a PTR above 60 – three out of every four schools – have been eligible to receive new staff each year. Teachers apply pressure through formal and informal channels to avoid being placed in remote schools and, in the absence of reliable data on school PTRs, officials have faced little incentive to enforce the rules strictly. A hardship allowance scheme, intended to reward a minority of teachers working in remote schools, is received by more than 80% of teachers, rendering it ineffective as an incentive.

The World Bank’s education team has been working with the government of Malawi for two years to address these issues, as part of programmatic Technical Assistance (TA). Working with central- and district-level officials, the task team developed the first up-to-date, accurate and comprehensive database of all Malawi’s primary school teachers and their current school postings.

We then identified and analyzed the driving factors behind PTR variation: year-round road access to the school, availability of electricity, distance from the nearest trading center (using geo-coded spatial coordinates), and the level of facilities like banks available at the trading center. Teachers care most about these amenities when expressing preferences over school postings, rather than provisions like housing which have previously been prioritized by government.

Using these findings, we developed a new three-level A-C classification of school remoteness, capturing not only physical location but school-level and trading center facilities. It provides a simple and accurate categorization that captures the key factors which influence teachers to lobby for or resist placement in schools.
Using this new, more nuanced categorization, the team developed two policy reforms designed to rapidly reduce disparities in teacher numbers without any additional costs. First, the annual deployment of 5,000 new teachers is now being targeted to Category A and B schools. This method should prove much more effective than the previous policy in allocating new teachers to the neediest schools.

Second, reforms are underway to the hardship allowance scheme to achieve the original goal of providing a meaningful bonus to teachers working in the most remote schools. The improved scheme will provide a monthly allowance of $35.00 (equivalent to roughly one-third of an average teacher’s salary), targeted to the 20% of teachers who work in the most remote schools, with a reduced amount for teachers in moderately remote schools. This is expected to lessen the pressure from teachers to avoid remote postings, and to incentivize them to stay in or move to hardship schools. The new policy is expected to be rolled out later in 2018.

These policies have the capacity to drive rapid improvements in the distribution of teachers. According to our analysis, if all new teachers are allocated to more remote schools, and just three percent of existing teachers move to more remote schools to obtain the allowance, PTRs between the most and least remote schools could be nearly equalized within one year. Evidence from the 2016 allocation of new teachers suggests that, even while these new policies were being developed, the increased awareness of PTR inequities engendered by the project already led to improvements in teacher allocation decisions (for details see working paper).

These policies were designed in close consultation with district-level officials, head teachers and the Teachers’ Union of Malawi (TUM), as well as central Ministry officials, to use data to specifically address the local-level dynamics and incentives of teacher distribution. The improvements in data engendered by the project will enable these reforms to be adjusted and updated to meet the changing needs of Malawi’s schools. Furthermore, the impact of the improvements in school-level PTR enabled by these policies will be subject to quasi-experimental evaluation, financed by the Royal Norwegian Embassy through their support to the Malawi Longitudinal Schools Survey results of which will be published soon.

Data-driven approaches such as these can facilitate better learning outcomes in Malawi by maximizing the efficiency with which resources are used – and empower teachers like Alberto and his students to achieve more.

Read the full paper here. All our resources on teachers are available here. Find out more about World Bank Group Education on our website and on Twitter.
Topics
Education
Countries
Malawi
Regions
Africa
The World Region