Around the World with Portugal's eEscola Project and Magellan Initiative 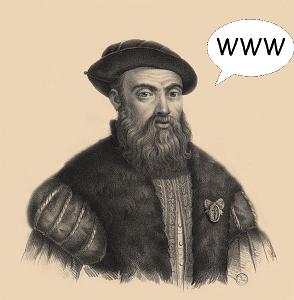 When people think of projects around the world to blanket schools with low cost laptops, initiatives associated with the One Laptop Per Child (OLPC) project often spring first to mind.  On a country level, it is the example of Uruguay that is probably most drawing attention from around the world from people interested in learning about how exactly a country can go about providing computing resources to all of its students, and what might happen as a result.  Indeed, Uruguay is increasingly a 'must visit' stop for education officials from countries planning for massive investments in technology use in their education systems for the first time, as well as from more 'advanced' countries who have not moved forward as quickly as has in attempting to utilize ICTs to transform the way educational activities are delivered and empower students and communities in new ways. (Just last month, the World Bank sponsored delegations from Armenia and Russia to visit the Plan Ceibal headquarters in Uruguay and learn firsthand about the Uruguayan experience from those who have been leading it.)  There is another country whose experience is less well known around the world than Uruguay's, but which is every bit as interesting, but in many different ways: that of Portugal.

In many ways, Portugal offers some potentially useful models and lessons for less developed countries seeking to quickly 'computerize' their education systems.   While part of the European Union, its per capita GDP is, according to recent data from the IMF, currently slightly lower than that of Barbados, and only a generation or so ago it perhaps had more in common (from an economic development perspective) with a number of emerging middle income countries than it did with more affluent EU member states like Germany or France.  In other words: Portugal is no longer a 'developing country' -- but it wasn't so long ago that it was. This makes it perhaps a more relevant potential model for many emerging economies seeking to quickly introduce ICTs in education at scale than places (like the United States, Canada, Australia, Sweden, the UK and South Korea) which have been traditional 'ports of call' for ministries of education seeking practical insights and know-how about what to do (and what not to do), and what the related impact might be.

Next week the World Bank will host an event in DC open to the public meant to showcase how Portugal provided every student with a laptop, connectivity, and free educational content -- and what has happened as a result.  (For more information about this event, which will take place in the late afternoon on Thursday 10 May, please see the related event web page. The event is free, but space is limited, and an RSVP is required.)  Over the past decade, Portugal has rolled out an ambitious, far-reaching set of related initiatives to:

[-] invest in a comprehensive program for educational 'transformation' to help improve education through the widespread introduction of new technologies, low-cost laptops, broadband connectivity, educational content, and related training and support

The potential for the introduction of a variety of new technologies to help improve education has been long recognized, but the history of such investments around the world has been decidedly mixed.  Few countries have moved as quickly -- and comprehensively -- as Portugal in its efforts to provide all students with laptops, connectivity, and free educational content as part of a larger initiative to help fuel economic development and transform society.

So what has actually happened in Portugal? Perhaps the most immediately visible effort over the past half decade or so has resulted in about a million and a half little 'Magellan' laptops being distributed to students.  While the hardware inevitably tends to get the most attention in press reports about educational technology initiatives (and to anticipate the inevitable question: in this case, it is a re-skinned Intel Classmate -- sort of like what has been used in Georgia), perhaps even more notable has been the broadband connectivity and free educational content that has been rolled out in parallel (with related training and technical support part of the package as well).

A follow-up blog post (with lots of links to more information) will go into greater detail about the actual mechanics of what has happened (and is happening) in Portugal, informed by new information that will be released at next week's event, and in a World Bank-sponsored case study that is under development.

The first question that is asked by the sorts of folks who work at the World Bank when they hear about initiatives like what has been rolled out in Portugal (and in places like Uruguay and Peru) is: What is the impact of this sort of thing, and how should we be measuring it?  Many leading voices that have emerged from the Portuguese experience point to an OECD study (PISA 2009 Results: Students On Line. Digital Technologies and Performance) that showed remarkable progress by Portuguese students in a number of areas during the period in which the massive roll out of laptops, connectivity, educational content and related training occurred.  I am reflexively skeptical of claims to equate large (and fast) positive improvements in learning outcomes of various sorts to the introduction of new technologies (correlation is not causation, after all), especially given how complicated the whole activity of 'education' is and how delayed the impacts can often be.  This is not to say that such claims are not to be believed, just that they are worth additional rigorous scholarly attention, I think, before we can credibly draw any hard conclusions in this regard.  (Flipping things around: It is perhaps notable that Portugal did not -- at least judging by the OECD study -- see a notable drop in student achievement during the time that computers were introduced in a massive way in schools; given the related disruptions that usually accompany such activities, this is a phenomenon that has marked some other educational technology initiatives in other places.)

It is a mistake, I think, to judge the success or failure of what has been happening in Portugal based on what has been happening in the classroom alone.  (This -- or better stated, the impact of the use of technology on student learning, behavior, attitudes and ambitions, inside and outside of the classroom -- is my primary interest in such things, but there are lots of other legitimate impacts that one can seek to investigate and measure.)

When speaking with many colleagues who work in education, I often find that the potential impact of educational technology initiatives on larger economic development activities is downplayed (or even, in some cases, dismissed). The 'dirty little secret' of large scale educational technology initiatives in many places is that they can sometimes be more about the development of a local tech industry as they are about what actually happens in the classroom.  About two years or so ago, I started to notice that, when traveling around the world to participate in events and meetings related to educational technology issues, I was regularly bumping into representatives from Portuguese firms marketing their goods and services, especially representatives from the industry consortium that was at the heart of the public-private partnership that Portugal has used as an implementation mechanism for the various initiatives laid out in its national technological plan for education [warning: link is to a very large PDF file]. This was rather new to me -- I have worked on educational technology issues for about 15 years around the world, but had never before run into a Portuguese company.  Now I run into them frequently, and take the opportunity to pepper them with questions about the Portuguese experience, and how they are finding this compares and contrasts with what they are learning in other places as they 'go abroad'.

In speaking with many countries who have grand plans to quickly introduce lots of new information and communication technologies for the first time in their education systems, one of the first questions that is usually asked (after the inevitable "which gadget should we buy?") is: How are we going to pay for all of this?  In Portugal, government used proceeds from the auction of wireless spectrum to help fund things, and strategically engaged with the local private sector to help share costs and spread risk. The scale of the public-private partnership in Portugal in this area is rather unique, I think -- I know of no comparable activity in another country against which to benchmark Portuguese experience.  Exploring just how this partnership worked in Portugal (and where or how it didn't, or hasn't) from a practical perspective is one of the objectives of an upcoming World Bank case study, and something that will be featured at next week's eEscola event at the World Bank in DC.

One of the remarkable features of what happened in Uruguay is that Plan Ceibal continued with little/no interruption when the government changed. In some other countries, ambitious educational technology projects are all but abandoned when the party or coalition in power leaves office -- this is especially true when announcement about 'shiny new computers for kids' were as much about making political promises as about doing something fundamentally useful for students, teachers and schools. It will be interesting to see how this plays out in Portugal. In many quarters, the ambitious recent educational initiatives there were closely identified with a previous government (have a look at the comments section in response to this blog post to get a sense of some of the related passion and rhetoric), but it is notable that the project itself has largely continued (so far) despite the change in power. Most of what has been written for international audiences in languages other than Portuguese about the Portuguese experience occurred when various initiatives were originally announced. To date there has not been much written for international audiences about what has actually happened since these announcements, but this is now beginning to change.

It is not only countries like Portugal and Uruguay (and South Korea -- another country that the World Bank monitors quite closely) that will be interesting to watch going forward. New, high profile large educational technology initiatives in places as diverse as Argentina and Thailand and Turkey are starting to draw international attention as well. Whatever the future may hold for such programs, the time is ripe to pay attention to learning from them right now.  Lots of other countries appear on the verge of embarking on similar types of large scale efforts to 'transform' their education systems with the help of large investments in educational technologies, and the few examples we have of how to do this in practice -- and, perhaps just as importantly, how not not to do it -- offer great potential to inform the way related grand ambitions expressed in high profile speeches and presentations translate into concrete realities on the ground.

How one medium-sized European country provided every student with a laptop, connectivity, and free educational content
-- and what has happened as a result

Note: The picture of famed Portuguese explorer Fernão de Magalhães ("Magellan is not the only famous Portuguese export these days") comes from the Biblioteca Nacional de Portugal via Wikimedia Commons. It is mashed up with an image of a speech bubble also obtained via Wikimedia Commons. Both images, and the resulting mash-up, are in the public domain.