Much has been made of the potential use of mobile phones to help collect, verify and disseminate information quickly, widely and cheaply in support of activities in the education sector.

What do we know about how such use looks in practice,
and what are we learning from emerging efforts in this area?


At an event last month at the World Bank, my colleagues Sukhdeep Brar and Gaurav Relhan shared some lessons from a few recent and on-going education activities in Uganda, providing some potentially quite useful insights for those seeking answers this question. The full video for this event, as well as the PowerPoint file presented, is available online. For those of you who are pressed for time, or are just not sure if clicking those links is worth the effort, here is a quick synopsis of what was shared and discussed.

First, though, some quick context about Uganda: As a recent World Bank Snapshot of Uganda’s Health and Education Services, relates:

"Not every African country has translated impressive rates of economic growth into rapid poverty reduction. Uganda, however, has made simultaneous progress on both these critical fronts. After a brief slowdown, the recovering economy is projected to grow by a worthy 6.5 percent in 2014. And extreme poverty has fallen by more than half over the past two decades, from 56 percent in 1992 to 24 percent in 2010, surpassing the first Millennium Development Goal on poverty reduction well ahead of 2015, the target year.

Alongside these encouraging trends, more children now survive their fifth birthdays in Uganda, and are enrolled in primary school. Yet the prospects of this new generation are not as good as they should be today. Only 54 percent of all children in Grade 3 can read, and just over half of those enrolled in school actually complete the primary level.

Mothers remain at high risk of untimely death due to complications of childbirth and a lack of skilled care, and an estimated 40 infants still die out of every 1,000 births. [... W]hile there has been much progress, Uganda’s education and health services — which together account for a quarter of the national expenditure — are delivering less than satisfactory results. To reach its national aspiration of becoming a middle-income country as articulated in the country’s Vision 2040, Uganda needs to make a concerted effort to improve the quality of these key public services, so that the current generation can grow into a healthy and educated work force."

Among other activities, the US$150m UPPET project included a very large (~ US$92m) civil works component, which has financed school construction (and re-construction and expansion) and supplied ~ US$37m of textbooks and science kits. Supervising such a large civil works component, and ensuring that information about this activity was shared as widely and transparently as possible, presented a number of challenges. Over 650 schools were involved across the country. The project featured decentralized school-based contracting, and so there were lots of small contracts awarded to small companies which did not have a lot of capacity to provide rigorous regular reporting. Over time it became increasingly apparent that a large number of textbooks being supplied were not being used, for a variety of reasons, including (from an infrastructure perspective) a lack of libraries and insufficient storage space at schools. The project worked through used existing government structures, which resulted in delays of the sort that easily be imagined when multiple levels of a bureaucracy are involved in efforts of this sort.

The project team had a keen interest in promoting transparency around the use of project funds for a number of reasons, including: to put pressure on government; to put pressure on contractors; and to help to separate the fact from fiction where rumors circulated about the use (or misuse) of public funds. One thing that was done in this regard was to take out ads in newspapers sharing the status of work at each individual school. (The use of newspapers in this way in Uganda is rather well-known, indeed famous, in international development circles, even if it has at times been perhaps misunderstood) This use of newspapers was very effective for spreading awareness ... but it was also very expensive (unsustainably so). Given the increasingly widespread dispersion of things like mobile phones, computers and the Internet in communities in Uganda, the team began exploring how ICTs might be used to help in this process with things like monitoring the progress of construction; providing pictures to help assess the quality of goods and services procured; monitoring the frequency of visits to construction sites by supervisors and government officials; and generating awareness and enabling feedback from project beneficiaries on the use of learning materials supplied under this project.

(For many regular readers of the EduTech blog, this context, and these goals, may recall somewhat similar efforts in the Philippines under the CheckMySchool initiative.) 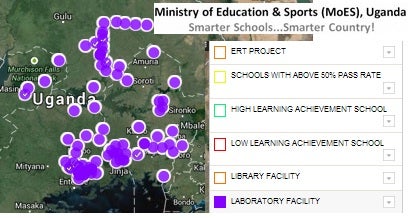 Although there were strong mechanisms in place for project supervision, monitoring and evaluation, the Ministry of Education struggled to receive timely reports from (e.g.) the technical supervisory firms and feedback from schools on the status and challenges impeding implementation of various project components. Under UPPET, a smart phone and web-based ICT platform for monitoring progress and making information quickly accessible was implemented. Key features of this effort (which utilized the open source 'Taarifa' tool) have included the capability to plot reports geo-spatially in real-time (using things like Google Maps, here's an example); integration with SMS; and the ability to quickly alert officials with related oversight and responsibility to emerging issues, like e.g. construction delays an individual school, or supervision visits that are past due).

'U-report', a free mobile SMS-based tool developed by UNICEF Uganda, was also used to promote information sharing collect stakeholder feedback about the status of the delivery and utilization of the learning materials provided to 1500+ schools as part of the UPPET project. (For what it's worth, UNICEF's Innovation Team has been at the cutting edge of piloting lots of, well, quite innovative uses of technology, especially related to the use of mobile phones, in developing country contexts, and has for many folks -- including me -- been one of the best examples of how groups within a large, international institution can remain nimble and develop/implement locally relevant technology tools as part of solutions to help address many longstanding developmental challenges.) U-report, which was already in widespread use for other purposes, has over 150,000 users across Uganda who participate in free SMS polls on various topics. In this case, so-called 'u-reporters' were polled to share feedback on what was actually happening (or not happening) with the textbooks and science kits in individual schools. While information received via U-report was a good deal 'fuzzier' (less detailed, less 'scientifically representative') than that provided via the Taarifa tool, it was quite helpful in identifying problem areas in project implementation that could then be further investigated.

A number of valuable lessons were learned during the course of these efforts in Uganda:

On the technology front, the general lesson learned (or re-learned, or reinforced) was to "first identify issues to be addressed, then identify the technology". (This is a lesson to which the EduTech blog regularly returns!) Other key related lessons (see the related PowerPoint file if you would like these presented in a concise, bullet point format) were to identify appropriate technology tools that can be adapted to address specific needs and to acknowledge that technology is only a tool, and so has various limitations. In addition, in the case of Uganda, the adoption of these specific technology tools was greatly enabled given widespread access to mobile networks, and improving access to the Internet.

On the institutional level, ownership from government was seen as a necessary pre-condition to make all of the happen effectively. Identifying and supporting focal people with the capacity and incentive to manage and analyze the data generated through the use of these ICT tools, and to coordinate necessary responses, was of critical importance. Adapting the use of the tools to meet the readiness of government to make the sorts of data generated under the project public, while at the same time 'pushing the envelope' a bit (transparency is not only an end goal, but a process as well), was also quite important.

On the implementation side, local technical expertise was seen as absolutely essential. Anticipating, investigating and incorporating the use of these sorts of ICT tools into projects at the design stage was seen to yield both the best results, and to help ensure that the tools were used as optimally as possible during the course of the project. While the financial costs to introduce and utilize these tools were modest (especially since these tools were already in widespread use in other contexts), it was important that they were figured into project costs. The fact that the use of these tools was complementary to, and integrated within, larger monitoring and evaluation frameworks, processes and activities was very important, as was the orientation to use the tools not merely just to collect (more) data, but to drive responses to help remediate specific implementation problems quickly.

For more complete information on the use of mobile phones as part of the data collection process under this education project in Uganda, you are welcome to view the related video of the fascinating presentation by Sukhdeep Brar and Gaurav Relhan, and the subsequent Q&A session, that I have attempted to summarize here.

This is the second of three related blog posts looking at the use of mobile phones in data collection efforts:


Note: The image used at the top of this blog post of a hummingbird ("one way to collect data of a certain sort while mobile") comes from the Wikipedian Jerzy Strzelecki via Wikimedia Commons and is used according to the terms of its Creative Commons Attribution-Share Alike 3.0 Unported license. The screen shot of the school mapping tool is adapted from the ugandaschools.net web site.
Topics
Education
Digital Development
Countries
Uganda
Regions
Africa