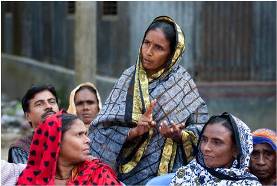 Saleha Begum was determined. Over the last couple of years, a number of children in her village had tragically died, their families left behind shocked and shattered. Memories were all that remained of these young lives cut short, and Begum was now determined to do her bit to stop the untimely deaths and accidents caused by the proximity of a highway to a community school.

We had arrived at Baishakanda Union Parishad in Dhamrai just before the local community meeting started. (Union Parishads are the lowest tier of local government in Bangladesh.) Begum had already taken her place among men and women from her village. A number of women threw anxious looks toward her. That day, Begum was going to play a vital role in advancing their agenda.

She was going to make a case that local funds should be spent to construct a wall around the school adjacent to the highway. This would keep the village children safe from speeding vehicles that had claimed many lives before.

Participating at the local community meeting to help prioritize the needs of her village, Begum is one of many women who now have a direct influence on how their community spends their development funds. With World Bank support, all 4,504 Union Parishads of Bangladesh have been provided with increased resources and delegated responsibility to deliver local services. For the first time Union Parishad women members are managing 30% of the funds and plans.

Each year after undergoing rigorous audit process, the Union Parishads with clean audit findings receive expanded block grants directly to their bank accounts. The Union Parishads are then allowed greater discretion in deciding their spending priorities and held accountable for service delivery.

More than 35,000 community plans generating employment for poor people have already been implemented by Local Governance Support Project (LGSP) Union Parishads so far. These include construction or rehabilitation of roads, culverts, drainage and embankment system, water and sanitation facilities, and school and clinic repairs.

That afternoon, Begum convinced the community at Baishakanda Union Parishad that it was time they decided to protect the lives of their children. Plans to construct a second tube well were temporarily put on hold, the community giving more priority and allocating funds to the school wall instead. Local people like Begum are no longer helpless – they do not have suffer in silence anymore. They are now able to directly influence how their community spends their development funds.

Following on the success of the LGSP, the first national program to strengthen Union Parishads, the follow-up second LGSP aims to provide increased discretionary resources and introduce performance-based grants in addition to expanding the amounts and coverage of direct block grants. Now more Bangladeshis will have a say in their own development decisions.