Creating an Ecosystem for Sustainable Financial Inclusion through Community Institutions 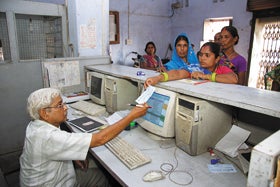 Bihar, a state in Eastern India has more than 100 million inhabitants and is India’s second poorest state. Ninety percent of the population lives in rural areas and the state has lagged behind in increasing access to finance in these areas. The credit-to deposit ratio of Bihar at 37% (an indicator of availability of credit in peri-urban and rural areas) is one of the lowest in India.

Jeevika, a program jointly supported by the World Bank and Government of Bihar, has demonstrated that investments in community institutions can deliver significant results. Investments in community institutions have helped them mature and become an institutional platform for the poor enabling them to demand better services from the public sector, improve access to finance from commercial banks and enhance their existing livelihoods.

It all starts with social mobilization- 850,000 women have become members of self-help groups (SHGs), which have been further federated into higher-level federations. Social mobilization has been accompanied with focused efforts to improve both the demand and supply side of credit. The financial capacity of community institutions has been built by helping them manage their own finances, and by providing financial literacy services and education. In addition, the project staff has worked with communities to build a micro-credit and a livelihoods plan. As these institutions reach a certain level of maturity, a one-time revolving fund is given to finance these activities.

Simultaneously, partnerships with financial institutions are facilitated so that these institutions can improve their responsiveness and provide better quality services to poor households. A number of innovative aspects of the partnership have contributed to the successful improvement in service delivery standards. Foremost among these is the role of Bank Mithra (Friend of the Bank) hired by community organizations. Bank Mithra is a young literate member of one of the households of the self-help groups in the village and is trained by the project. The Bank Mithra, stationed at the bank branch, maintains data of the borrowing households, provides financial counseling services, facilitates transactions, builds relationship with the commercial banks, and monitors repayment rates. She is compensated by the community organizations and is accountable to them. Encouraged by these efforts, more than 14 commercial banks have partnered with the communities to create an eco-system for sustainable financial inclusion.

Eventually, access to credit amongst project participants in six districts has improved significantly. Recently, the project reached a major landmark, and successfully completed banks linkages(access to credit through banks) worth 1 billion Indian Rupees (Rs.) in 1 year (~US$18 million), which is almost double of last year. The communities also have savings worth Rs. 500 million. The communities have revolved savings, credit and funds given by the project for inter-loaning purposes. Since 2007, the total financial turnover of households, which have accessed credit multiple times, has been Rs. 5.25 billion, which is approximately Rs. 13,000 per household. However, commercial bank partnerships are only a small part of the comprehensive financial inclusion package facilitated by the project. Community institutions have also enabled improved access to other financial services offered by the public and private sector in Bihar. Success stories like this should be showcased and shown to other countries like Bangladesh, so that they may benefit from the lessons learned.

Very good to learn about the progress of this programme in Bihar. I had a few more questions here. How has this portfolio performed for banks in terms of recovery rates? What is the all-in cost at which the customer borrows this Rs. 13,000 loan? Is there a formal evaluation planned of this programme? Would love to learn more.

It is really encouraging to learn from this story . Jeevika has successfully taken up the challenge and proved it self in this venture of providing financial inclusion facilities to even the remotest areas of Bihar, where a few years back, banks were also un-imagined entities. Yes the agency of the people and community is the most important one in this case. The Banking Correspondence Models in the form of Customer Service Points, piloted in selected areas have helped and motivated more and more people to come under the FI fold. Jeevika has definitely provided the banks with a positive banking proposition, and not just another social obligation,which has worked wonders, in terms of banks coming and actively participating in the various bank linkage programmes. Finally it has also been seen that those members who are associated with Jeevika are performing well when it comes to repayments. Ultimately, it is the element of trust , and the emerging social capital, that has made this goal of Financial Inclusion a seeming possibility in Bihar.

Thank you for all your thoughtful comments. Here are answers to some of the questions you had asked:

-A rigorous randomized evaluation of the Jeevika program is currently underway, results of which are expected to come by mid 2014.

-The recovery rates for this portfolio as certified by the bankers is 96%.

-The SHGs borrow from the commercial banks at the standard rate applicable for the SHG portfolio. However, the on lending interest rate for the SHGs to their members ranges from 18-24% per annum.

This is not accelerated nursing programs kent state necessary.
'Care services minister Paul Burstow said: 'The ratio of nurses to patients shortens the number of years dating back to 2003.
It is important to tell. By the end of life care and to demonstrate that accelerated nursing programs kent state
you truly do posses the skill. If your company tries to get you an overseas job.
Most programs require a master's degree graduate level study.

Thanks for Sharing this success story of community institution in Bihar. I am working in Bihar on community institution profile in a well reputed development organization. I have q query in mind how the banks are able to disburse such a huge volume to these institutions.has the process of the credit appraisal of the groups been completed? They are taking the credit for what the purpose? as a development professional working in bihar, I would be happy enough to get the answer of this question.