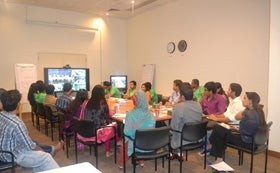 It is hard to talk about South Asia without invoking its demographics. The region will contribute nearly 40 percent of the growth in the world’s working age (15-64) population, and will need to add a staggering 1 to 1.2 million new entrants to the labor market every month for the next two decades. Absorbing the influx of youth into the labor force is one of South Asia’s core challenges. But while economists grapple with employment statistics and economic policy, jobs are created at the grassroots. Entrepreneurship is the spark that lights the fire, and the engine that generates opportunities in local communities.

In light of these challenges, the World Bank hosted a discussion on Youth Entrepreneurship in South Asia on July 10, bringing together young social entrepreneurs from Bangladesh, Nepal, Sri Lanka, Japan, and the US. Several of the participants had been sponsored to attend the Bank’s Annual and Spring meetings in the past, and had remained engaged with the Bank. Participants shared their experiences, highlighted their sources of inspiration, the challenges they faced, and the assistance they needed to spur job creation and improve welfare within their communities.

Despite the difficult labor market, the youth stressed that their generation was not part of the problem, but part of the solution. Harnessing their energy and enthusiasm, these entrepreneurs had been proactive at improving their communities, from working with underprivileged children, building schools in conflict-affected zones, to delivering health services to the urban poor. But there was a double dividend. In addition to the social benefits, these young leaders fostered a spirit of volunteerism, encouraging peers to be active in their communities. “By volunteering and engaging their surroundings, youth develop soft skills like leadership, public speaking, language abilities and networking… skills that help in career progression” said Fadhil Markar, the founder of Connect Lanka in Colombo.

The discussion quickly became a forum for peer learning, with participants outlining the difficulties that came with being risk-takers. Despite being separated by distance and national borders, the entrepreneurs were united by the shared nature of their challenges. They highlighted the difficulties in maintaining momentum of their projects, the lack of recognition for their work, political instability and the subsequent brain drain in their communities, as well as technical issues such as financial sustainability, developing impact evaluation metrics, and the challenges of attracting investment.

The feedback from the meeting was overwhelmingly positive. Participants highlighted the Bank’s crucial role in providing a neutral space for discussion, as well as its convening power, and the value of the networking it provides to young people with little access to resources. The youth expressed a strong interest in staying engaged with the Bank, hoping to tap into its knowledge and expertise. The point was driven home emphatically. Despite the late hour of the video conference (it was past 11pm in Japan!), participants stayed behind to thank the organizers, and refused to sign off until the next VC was scheduled. The demand was evident. This meeting was going to be the first of many.

If demographic trends are any indication, the youth movement is here to stay. As the Arab spring has illustrated, the ‘can do’ spirit of the youth is contagious, and can act as potent agent for change. In the context of the Bank’s mission, the youth have also become a key stakeholder, particularly in enhancing the development impact of Bank projects. As the Bank scales up its strategic engagement in this area, embedding youth perspective into operations and policy consultations, their voice will get only get louder. Stay tuned. Is there a report providing more information on this project ??

I really enjoyed this discussion, thank you for putting together the forum!