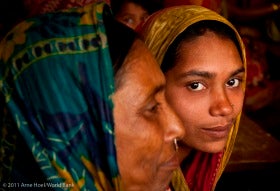 One in every three women in the world will be physically or sexually abused at some point in her life. This could include the woman sitting next to you on the bus, your little niece playing in the garden, or even a friend you have known all your life.

For years, Rumana Manzur, assistant professor at Dhaka University, had been silent about the abuse she suffered at the hands of her husband. But on June 5, 2011, Manzur was brutally attacked at home. Her husband beat her mercilessly, tried to gouge out her eyes, and bit off part of her nose in a fit of rage. Their 5-year-old daughter was in the room and witnessed this inhuman act. Manzur is now blind, her daughter traumatized for life.

Even as I write this, I am reading of how yesterday, Rodini Begum, a 22-year-old homemaker, was killed by her husband for dowry at Laxmi Mondap village. She had suffered through two long years of abusive marriage and was frequently tortured for dowry. It all came to an end when her husband beat her up savagely; she died on the spot.

And only the day before, a 19-year old-bride, desperate to protect herself from being raped in a bus in Savar, jumped off the moving vehicle. She and her husband were on the bus, returning home after visiting relatives. Unable to fight off a gang of six, who beat up the husband and tried to rape the wife, the couple jumped off the moving bus. She didn’t make it; another vehicle ran her over.

Accordingly to a report by the Bangladesh Police, between 2001 and 2012, a staggering 174,691 women in the country fell victim to various forms of cruelty and violence – including acid attacks, abductions, rapes, murders, trafficking, and dowry-related violence. According to the United Nations Human Development Report, Bangladesh has the worst record for rape in the region – statistically, one in every 1,000 women is raped.

Overwhelming, horrifying, sickening statistics of violence; how can we remain silent and not do our bit to help end abuse against women and girls?

I say, enough is enough!

Join the World Bank in a call against violence and let us know what can be done to bring an end to the abuse. Participate in a SMS contest for South Asian youth – we want to hear your best ideas in response to the question:

“What Will It Take to End Gender-Based Violence in South Asia?”

Get the details of the competition here.

Speak out for the millions of women who are tortured, burned, beaten, and raped across the world. Remember, abuse can happen to anyone. It can happen to you and me, our sisters, and our mothers. Now is the time to step up and increase public awareness of all forms of violence that haunt women and girls, both at home and outside. We owe it to Manzur, Begum, and the millions of others who have suffered and died to show us that silence is NOT acceptable. As a muslim I stand against all kind of brutal acts in any society faced by women. Women are supposed to be protected not abused, God created them physically weak so there is no chance of physical competition against women. Islam does not permit to hit a woman, but unfortunately muslims still does this non humanitarian act against women.

I also condemn the brutal activities against women greatness, and I realize the condition of victim families.

Women does not deserve such brutality and violence, so we cannot just sit and think God will do wonders for us. Can we stand up request funding so that at least all the developing countries are capacitated and educated on such issues. If we start now in ten years time this could be history.