Let there be cyclone, we are ready! 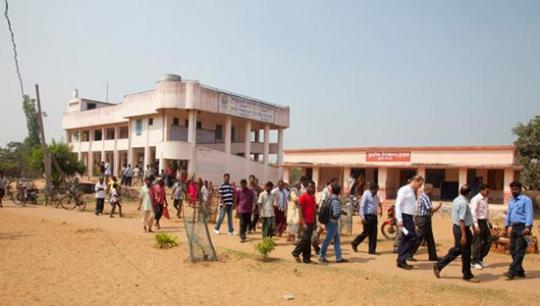 "1700 people Sir!” Satya said. “Everybody is fine.” Satya had just shown me the equipment of the multi-purpose cyclone shelter in Ganjam District, where Cyclone Phailin made landfall. The equipment had looked exactly the same as what I had been shown during the briefing the day before at the Odisha Disaster Management Agency in Bubaneshwar.

That had surprised me because the shelter where we were was almost ten years old, being one of the first ones to be built after the super cyclone of 1999. “I am the Secretary of the Shelter Management Committee Sir; I am in charge of maintenance.” Satya had said when I asked him how come everything looked in such good shape. “I have done this for seven years.” He added proudly. I was amazed. It is not often that a field visit highlights a facility that is close to ten years old. Even new facilities rarely look this good… 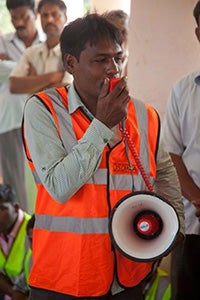 Satya went on to explain how these shelters are really multi-purpose. They serve as school buildings every day. In the weekends and at night, they are used for community meetings and as wedding halls. That is why the community is looking after the shelter so well. It gets used every day.

But 12 October 2013 was not every day. It was the day when Cyclone Phailin hit. It was the day when the Government of Odisha managed to evacuate 850,000 people, an incredible number. “What did you do that day?” I asked one of the men with “Search and Rescue” written on the back of his uniform. “I helped elderly people to the shelter sir, they came from everywhere,” he said. “How many," I asked. “I don’t remember sir,” he said with a shy smile. “They were too many.” People started applauding.

Clearly, this shy young man had made a major contribution that day in October...many of the 1700 people Satya had mentioned earlier had been brought in by him.

When we got up to leave, Satya picked up his megaphone and started chanting. Everybody joined in, repeating the same slogan with pride. I could not understand the words, so I asked. “Let there be cyclone, we are ready!” translated the Government official who was with me. “That is what they are saying. They are very proud.” 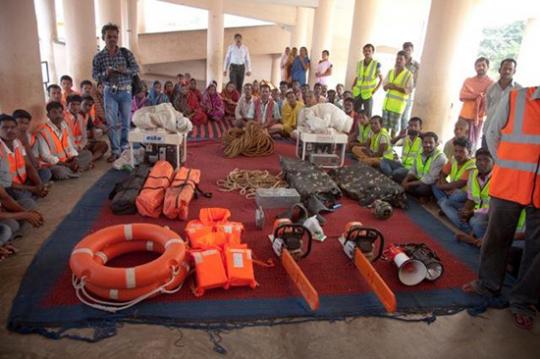 Later that day we saw a new shelter under construction and witnessed the handover of two more shelters to communities nearby. They were handed over to the secretary of the shelter management committee in those communities, along with the Headmaster of the village school. The pride and anticipation in their eyes reminded me of Satya each time. They were ready to take their responsibility like he has done for seven years already. When we drove away from the last new shelter to go back to town, I heard the same chanting again.

“Let there be cyclone, we are ready” I thought. What a strange slogan it had seemed at first. Now, it sounded familiar already. That is because in Odisha it is true. They are ready!

Photos by Martje van der Heide
Photo Caption 2: Satya, the Secretary of the Shelter Management Committee and responsible for maintenance of the cyclone shelter. Truly inspiring--- this effort on the part of leaders like Satya, the coastal communities of Odisha, the officials of OSDMA etc.....on a topic of "maintenance and upkeep" something we are not normally very well known for.... excellent description as always from Onno.....a joy to read and see it from your point of view......

It is definitely inspiring especially given the large scale evacuations that were undertaken and the loss of lives at only 44 persons. We need more such initiatives across the country to ensure disaster preparedness truly helps reduce fatalities.

A lesson for other developing states!!!
Sir, maintenance culture, proactiveness and indeed prompt response to disasters has been d bane of most developing state. So kudos to Satya, odisha communities and world bank. Also to onno for sharing this inspiring piece. Keep up the good work sir. We throughly missed you in Nigeria

Thanks a lot Dayo! I miss Nigeria too

The massive successful evacuation during cyclone Phailin was no mean task . Not many would have expecetd us to be that prepared , especially in the backdrop of the Uttarakhand disaster of June '13. The successful evacuation was an effort stemming out of years of planning, construction requisite infrastructure and most importantly involvement of local organisations and volunteer teams after the super cyclone . The dedication of leaders like Satya is truly inspiring . This story is a good example of having learnt the right lessons from the past and ensuring maintenance , something as Shankar rightly points out , we are not good at. Thanks Onno for the blog.