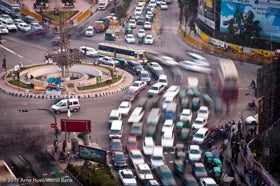 At least 46 people were killed and more than 200 injured in 31 road accidents across the country in the last four days including the three-day Eid holiday --- The Daily Star, November 10th 2011.

But these statistics, numerically shocking as they may be, fail to reflect the social tragedy related to each life lost to road accidents. One accident that remains afresh in my memory is the death of 44 school children last July, after the truck they were travelling in skid and fell into a pond. 44 young dreams and hopes lost due to reckless driving. Only a month after this tragedy, Bangladesh lost two brilliant citizens, filmmaker Tareq Masud and journalist Mishuk Munier, to yet another road accident in August. We, the people were shocked, angered and many led protests to the streets demanding immediate action to bring justice for those killed and to ensure road safety. But as from the lines quoted in the beginning from a daily newspaper, one can see that the most recent fatality figures express no progress!

A high growth in urbanization and motorization can be identified as one of the factors leading to the higher number of road accidents. Recent studies claim that the annual urban growth rate in Bangladesh stood at 4% in 2010, whereas the present growth in motor vehicles stands at 8%. Consequently, the road systems are experiencing greater congestion, physical deterioration and safety problems. According to a WB report, only 40% of the main roads (National Highways and the Zila Roads) are in good state.

The traffic police department has a crucial role to play in identifying and holding accountable reckless driving, speeding and unstable or overloaded vehicles. The maintenance, repair and expansion of roads coupled with setting up dividers on national highways, cautioning signals for hazardous locations, disseminating information on driving and road safety to masses through media and exemplary punishment for violating traffic laws are some of the main areas that need to be worked on rigorously by the government.

As citizens, we too have a role to play in ensuring road safety. While travelling in public transports, passengers should protest and stop speeding and reckless driving by bus and taxi drivers. Owners of motor vehicles should ensure that employed drivers have genuine licenses, are properly trained and drive responsibly. Road safety education to pedestrians, especially children, within the communities by community leaders is also a good way to promote road safety.

For a developing country like Bangladesh, allowing its citizen to perish to road accidents is not only tragic but unacceptable! Right on the mark on the importance of road safety. As I argued on a recent blog (http://blogs.worldbank.org/health/making-a-public-health-case-for-safer…), ff one of the goals of development is to improve health outcomes by reducing premature mortality, injuries and disability, then unsafe roads are a key public health challenge.
The time has arrived to confront this multisectoral challenge!

My partner and I stumbled over here coming from a different website and thought I may as well check
things out. I like what I see so now i'm following you.
Look forward to checking out your web page for a second time.

Hey there! I just wish to give you a big thumbs up for
the excellent information you've got right here on this post. I will be coming back to your website for more soon.

Thank you very much for your information . It was really helpful to me for school assignment .

There are other issues behind road accident in Bangladsh......
1)Unrest driving
2)Connecting highways with county side small road
3)Local market near by highways
4)3 wheel motor drive on highway
5)Driving speedy during foggy and rain.Especially this time need to more on driving because road not seen properly and break not work effectively.

Accidents are occured due to
1.Unskilled Drivers
2.Illegal competition
3.Addicted Drivers
4.Movement of vehicles without fitness
5.Narrow streets
This is my observation.Thank you so much.