The Unbanked in South Asia 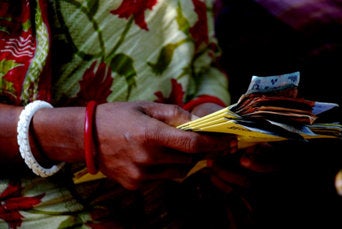 What is the account penetration among women in South Asia? Has the spread of bank agents affected how adults do their banking in Bangladesh and Nepal? How are people all over South Asia saving, borrowing, making payments and managing risk?

In the past, the view of financial inclusion in SAR has been incomplete, and the details unsatisfying. A patchwork of data from diverse and often incompatible household and central bank surveys was the only information available with which to construct a regional picture.

With the release of the Global Financial Inclusion Indicators (Global Findex) we now have a comprehensive, individual-level, and publicly-available database that allows for comparisons across 148 economies of how adults around the world manage their daily finances and plan for the future. The Global Findex database also identifies barriers to financial inclusion, such as cost, travel time, distance, amount of paper work, and income inequality.

Who are the unbanked?

The database covers 6 economies in SAR and with over 40 indicators, each sliceable by gender, age, education, income, and rural or urban residence, one can easily get lost in the nuance. But let’s start with the broad strokes: according to the data, 33 percent of adults in SAR have a formal account, ranging from about 10 percent in Afghanistan and Pakistan to almost 70 percent in Sri Lanka. In the developing world as a whole, 41 percent of adults have a formal account. 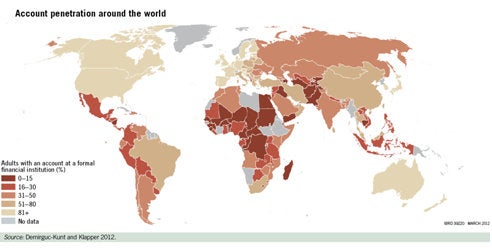 Why do 45 percent of adults – more than 700 million people - in SAR remain outside the formal financial system? 65 percent of the unbanked say that they do not have enough money to use a formal account, 34 percent say they don’t need one because someone in their family already has one, and 8 percent cite religious reasons. Compared to other regions, unbanked adults in SAR were particularly likely to cite these last two reasons. About a fifth of the unbanked also cite distance to banks and the costs associated with a formal account as reasons for not having an account. 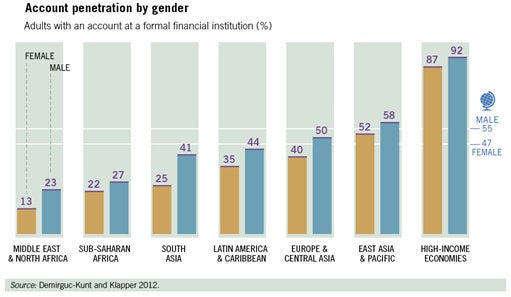 Although the overwhelming majority of account holders worldwide deposit and withdraw using either ATMs or over the counter at a financial institution, there is evidence that bank agents may be changing how people bank in a few South Asian countries. More than 15 percent of account holders in Bangladesh and Nepal report depositing most often though a bank agent (or, in survey-speak, “some other person who is associated with your financial institution”).

Bangladesh and Sri Lanka both stand out for the reported use of formal loans. In Bangladesh, 23 percent of adults report having originated a loan from a formal financial institution in the past 12 months. In Sri Lanka, the figure is 18 percent. By contrast, the developing world average is 8 percent. This may reflect the broad coverage in these economies of community-based models (such as cooperatives, MFIs, village banking) that make small formal loans to the poor.

On April 19th, the World Bank released the first round of the Global Findex database, based on more than 150,000 interviews carried out by Gallup Inc. in association with its 2011 World Poll. The complete database, report, and survey are available at http://www.worldbank.org/globalfindex.

I guess its unfair to compare Afghanistan and Pakistan together in this case as the picture in not clear. Pakistan probably would have high account penetration compared to Afghanistan wiith so many banks on every street here in Karachi.