What Can South Asia Do to Make the Big Leap? Last week, I discussed the optimistic and pessimistic views of South Asia's development potential. As I highlighted in my book, Reshaping Tomorrow, South Asia is among the fastest growing regions in the world, but it is also home to the largest concentration of people living in conditions of debilitating poverty, human misery, gender disparities, and conflict.

First, growth cannot be taken for granted. The link between demographics and growth is not automatic. A demographic dividend could morph into a demographic disaster, if people are not healthy, educated, and trained. India needs physical infrastructure – ports, transport, and communications – to take advantage of trade and globalization and required to move South Asia into higher-quality goods and services.

Second, rapid growth is important for poverty reduction. Rapid growth was instrumental in reducing poverty but poverty rates have not fallen fast enough in India to reduce the total number of poor people. Although inequality increased more rapidly in China than in India, China still managed to reduce poverty faster than India, due to a faster pace of income growth. 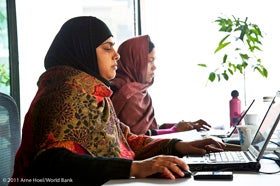 Third, growth is not sufficient. Social progress – education, health, and women's participation in economic activities – have not kept up with income growth. Boys outnumber girls in school enrollment. Dropout rates for girls are higher than those for boys. Dowry puts pressure on families of girls to marry them early, leading to preference for sons. Legal and judicial systems, as well as law enforcement mechanisms, have failed to address the high incidence of violence against women.

Higher death rates for young girls are symptomatic of a general pattern of discrimination against girls. The expectation that girls will grow to do little other than serve their husbands reduces a parent’s incentive to invest in their daughter's human capital. Uneducated women then have few alternatives so the expectation becomes self fulfilling, leaving women in a continuous circle of neglect. Gender disparities, which begin at childhood in the region, have significant adverse long-term effects. Women and girls bear the largest and most direct costs of social disparities. So, policymakers should consider direct policy interventions to accelerate social progress, with a particular focus to enhance gender inclusiveness.

Policymakers should not think of growth as separate from inclusion. Increased income and social disparities should not be viewed as the price to pay for higher growth. A development response that aims to promote growth first and deal with human misery later is not sustainable. The demographic dividend is a time-bound opportunity. It provides policymakers with an incentive to redouble their efforts to promote the skills of the working-age cohort so that it has the ability to contribute productively to the economy.

Time is of the essence. Policymakers need to take action today in order to reshape tomorrow.