Why do smaller countries benefit from greater trade with their neighbors?

“The real end winner of NAFTA (North American Free Trade Agreement) is going to be Mexico […]” said then Mexican president Vicente Fox, in 2001. He was referring to Mexico’s gains from trade integration with the USA through NAFTA.

Vicente Fox was right. Mexico has continued to make sustained gains in trade over a 20 year period after signing NAFTA in 1994 with the US, its much larger partner (figure 1). 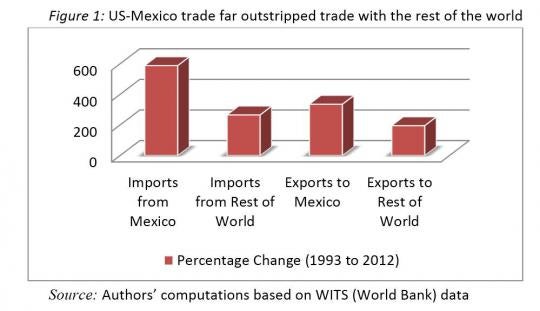 ​Opening up trade is not easy because losses can be immediate, while gains, despite being potentially much larger and more widespread, are often dispersed over time. Producers that may sustain losses from more open imports are often well organized and can hold up reforms quite effectively. Moreover, when one of the countries involved in mutual trade liberalization is disproportionately large, it enables the smaller country lobbies to raise the specter of being swamped by imports from its larger partner.

In the case of South Asia, a history of political differences further complicates deeper trade and economic cooperation within the region. Under these circumstances, opening up trade to neighbors requires strong leadership and a bold vision about the role of trade and regional integration in economic development.


Opponents of trade liberalization in South Asia focus on the potential losses to output and employment from more competitive neighboring countries, such as India. What’s missing in their arguments is the large benefits to other segments of the economy over the medium and long term which make up for the losses incurred.

​Let’s take the three key players in this debate; consumers, producers, and exporters. Consumers in smaller countries would always gain from mutual trade liberalization because they would not only have access to cheaper goods and products of high quality, but also to more variety. Exporters in the smaller countries would also benefit from the trade liberalization, as they gain access to larger markets and more competitive inputs.


Producers in the smaller country present a mixed picture, with the more productive ones gaining and the less efficient losing. When foreign competition increases, it exerts pressure on producers to become more efficient and increase productivity. Firms unable to improve productivity could be pushed out of the market. However, this can be counterbalanced by other firms that benefit through availability of better and cheaper inputs, which helps them become more competitive both at home and abroad.

A more complete view of the winners and losers arising from mutual trade liberalization with neighboring countries allows governments to display stronger leadership and readiness for the transition process. For key sectors where there are concerns about large job displacements, the liberalization process can be gradually phased in over a credible and finite time frame. On the other hand, to take full advantage of market access (and also better withstand enhanced import competition), policies to enhance competitiveness can be implemented as priority. With recent elections in many countries, the new governments in South Asia can use their political capital to take bolder steps that deepen mutual economic cooperation and help accelerate shared prosperity.

Go in-depth on the topic: SARConnect Policy Note: Opening up markets to neighbors: gains for smaller countries in South Asia the political stability and law n order situations are d major threats for trade relations with neighbouring countries.In this wayy all countries are facing inflation and costly articles. The consumers are suffeing from it