How many people does it take to change a light bulb?

Riddle us this. In what country are... If you guessed India, you are right.

With a population of about 1.2 billion, India is one of the largest consumer markets in the world. So it’s no surprise that household appliances account for several gigawatts of electricity usage across the country. As India’s middle class grows and people move from villages to towns and cities, electricity usage is only increasing. In fact, hundreds of millions of electric appliances will be added over the next few decades. This poses a serious challenge for India’s energy security since there already are electricity supply shortages, which often lead to chronic outages and blackouts. The surge in household appliances is also a climate change challenge—India, the world’s third-largest CO2 emitter, is predicted to continue increasing its greenhouse gas emissions at least until 2030.

But India is turning this challenge into an opportunity by tapping into energy efficiency solutions, a relatively new area with already a few major successes. Considered globally as the “first fuel,” energy efficiency is rising to the forefront of India’s quest for innovative solutions  to provide 24/7 reliable and affordable electricity for all.

That’s like taking 17 million cars permanently off the road.

UJALA is the first zero-subsidy LED lighting program in the world, made possible because the high-quality LED bulbs were affordable for consumers, eliminating the need for incentives. The cost of an LED bulb with a three-year warranty has dropped dramatically -- from $4.50 just over two years ago to $0.85 now. In fact, LED technologies have improved significantly in the past few years, resulting in better quality and more light at lower costs.  In India, residential consumers now get these LED bulbs from UJALA distribution centers across the country or through the participating retailers. Consumers pay for them either partly upfront and then in installments through the “On-Bill Financing” model, or all in one go.

India plans to expand this program even further.

Work is already underway on streetlights. In just two years, EESL, the public sector joint venture company in India that implements UJALA, has deployed over 750,000 LED street lights in over 100 cities around the country through a “pay-as-you-save” scheme under the Street Light National Program (SNLP).

Replacing street lights, however, is not without challenges. Estimating the energy savings that would pay for the investment in LED street lights is difficult because the baseline consumption of electricity is sometimes impossible to calculate due to lack of good metering, maintenance and billing records. In addition, 10-20% of streetlights usually don’t work and electricity consumption records are often missing or erroneous making the estimation, measurement, and verification of energy savings even more complicated.

EESL has come up with a novel way of avoiding these challenges by using the energy savings calculations in a pilot demonstration of LED lights to extrapolate the “deemed” energy savings for the entire municipality where LED street lights are to be installed.

The LED street lights were especially helpful after Cyclone Hud-Hud in the state of Andhra Pradesh last year. More than 90,000 LED streetlights were installed in the city of Vishakapatnam in just six weeks as part of rehabilitation efforts. The municipality’s street lighting monthly bill before the cyclone had been almost $4 million, with $1 million in maintenance costs. After LED streetlights were installed, the streetlight bill fell by 45% and light levels improved by 70%. These benefits will last for another 15-20 years, over the estimated life of LED lights.

The annual share of LEDs in the Indian lighting market rose from less than 1% to 15%.  Domestic manufacturing of LED bulbs has increased from 100,000 to 30 million per month, helping add new jobs. India hopes to replace all of its 770 million incandescent bulbs with LEDs by 2019. This will:  But if you are still wondering about that big number at the beginning of this blog -- it is the actual number of LED bulbs being deployed in India right now. As soon as an LED bulb is given to a consumer anywhere in the country, it gets logged on this centralized dashboard. 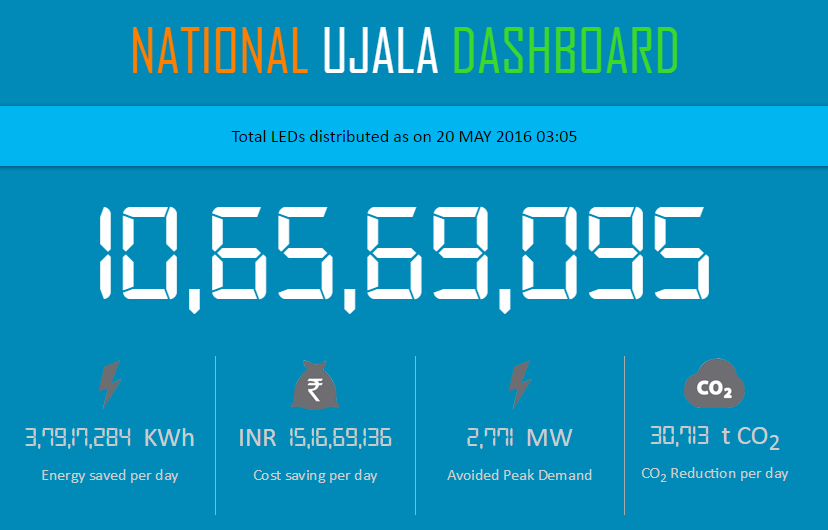 If you think this is promising, wait till you hear what is in the works for ceiling fans and irrigation pumps. (Coming soon…)
Topics
Climate Change
Energy
Environment
Jobs & Development
Urban Development
Countries
India
Regions
South Asia This is exactly what Thailand authorities are ignoring. In Bangkok alone, there are opportunities to reduce peak electric demand by thousands of mega watts!

Ashok and Amit , a good collection of near facts and figures.
My observation is as follows:
1) Since I stay in Kolkata and is under Kolkata Municipal Corpn(KMC), almost 70% of Old and New Street Lighting have been converted to LED including public places and parks, etc. KMC has already started a drive for countless Billboards to convert the Tube lights into energy efficient lighting.
Just waiting for the Day when CERC (Central Electricity Regulatory Commission) will declare a mandate wherein Electricity Distribution Company have to adopt a DSM scheme with a fallout predetermined result which will essentially encompass with Energy Efficient Lighting only.
2) Santion for greenfield Estate projects gets a sanction only if the lighting in such areas are considered with LED (and no CFL)
3) Lastly and not the least, ask any Private Distribution Company feeding the area, they keep at a safe distance citing in their mind about less of business as Energy Efficient Lighting does not contribute significantly to 'shaving' of the peak power demands.