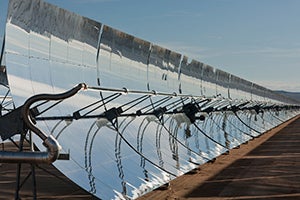 It’s no secret that renewable energy development in developing countries is on the rise.  In its most recent report on renewable energy investment, the UN states that investment in renewables in developing countries  has grown over ten-fold – from USD 8 billion to USD 89 billion in the past eight years.  When taking advantage of solar resources, the clear choice – assisted by large recent reductions in capital cost - has been for solar photovoltaic technologies (Solar PV).

However, over the last three years, some developing countries such as South Africa, Morocco and India have begun to turn to Concentrated Solar Thermal (CST), a new set of generation technologies with the potential to provide a more reliable source of electricity than Solar PV. 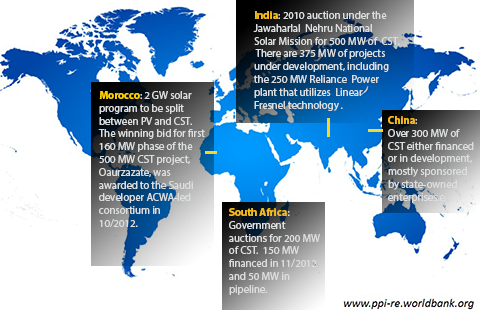 CST: How is it different from Solar PV?

The crucial characteristic of CST is that it allows the storage of solar energy, enabling electricity to be discharged to the grid at times when there is no sunlight. This stored source of power can be relied on to meet demand as it occurs and not only when the sun is shining, as in the case of Solar PV.

The key technological difference between Solar PV and CST systems is that Solar PV uses panels to directly convert solar energy into electricity, whereas CST uses a heat transfer fluid to capture the energy which is then used to create steam to drive a turbine. The Parabolic Trough (PT) is one of the methods most widely used to transfer solar rays and heat to electricity, representing more than 90 percent of global capacity installed of CST technologies.

Disadvantages of CST include high upfront investment, and thus increased electricity cost. The plants are also very sensitive to the availability of sun, requiring higher levels of radiation than PV systems to perform optimally. Another challenge is the need for water as a coolant, which is frequently scarce in locations with high solar availability.

Due to the capital intensity and reliance on high levels of solar radiation, CST deployment has thus far been to a large extent policy and geography driven - which is why projects have been concentrated in areas with the highest intensity solar resources like Gujarat, India.

Global investment in the CST sector has been led by Spain and the United States, but developing countries are increasingly becoming part of the equation:

As with any nascent technology, the financing of large CST projects has been heavily dependent on loans from state, multilateral or bilateral financial institutions characterized by long tenures and low rates of interest.

This is also true of developed markets such as the United States. In Arizona, 80 percent of the total cost of the Solana Parabolic Trough project was financed by a 20-year concessional loan from the Federal Financing Bank. The project, developed by the Spanish company Abengoa, was awarded a 30-year power purchase agreement (PPA) with the Arizona Public Services at a price 40 percent higher than the average wholesale price of power in the wider market.

Contrast this price with that offered by Abengoa for a 100 MW project using the same Parabolic Trough technology in South Africa; the KaXu CST project will sell power at more than twice the price than the Solana project in Arizona.

What explains such a large difference in the price of power?

The two projects by Abengoa that use the same technology offer an interesting example.  In terms of up front capital (equipment) cost, the projects are quite similar: the quoted project cost for Solana in Arizona was USD 2 billion, or 8 million/MW installed, whereas installed cost for KaXu totaled USD 8.7 million/MW.  However, while precise financing details on the KaXu project have not yet been released, it is clear that they will be substantially higher.  KaXu has signed agreements with the IFC and the Clean Technology Fund for USD 150 million, and the Development Bank of South Africa (amount undisclosed), however these loans along with any local commercial financing will most likely be priced at a minimum cost of debt of 8.5 to 12.5 percent, almost twice that of the Solana project.

Investing in a nascent technology in markets with a riskier investment profile - for example, higher political and project counterparty credit risks - are factors that raise the financing and other costs of projects in developing countries.

Another possible factor is the need to construct more associated infrastructure than might otherwise be necessary in more developed markets. The structure of the Power Purchase Agreement can also affect the price of power as different thermal discharge requirements by a utility – for instance to meet hours peak-demand - can force operators to use less efficient charging strategies, which in turn increases costs.

Despite the current high capital costs, the promise of CST to overcome the intermittency issues of Solar PV is drawing many developing countries to consider this technology in their energy mix. Currently, the technology is mostly being implemented in large, high-cost, policy-driven demonstration projects. However, the opportunities to achieve economies of scale are significant.

The World Bank is at the forefront of application of this promising technology to developing countries.  Cognizant of the need to bring down costs, the World Bank is fully participating in the Arab world Initiative Concentrated Solar Power Plan.  Up to nine CST plants with total capacity of 1.2 GW are set to be implemented Morocco, Egypt, Tunisia, Algeria and Jordan by 2018, with USD 750 million committed jointly by the World Bank and African Development Bank.

This blog post was authored by John Probyn and Bastiaan Verink from the Private Participation in Renewable Energy Database and Sara Sigrist and Katerina Valdivieso from the PPP in Infrastructure Resource Center. Excellent article. Glad to see my legacy live on.