In 5 charts – the growth outlook for Europe and Central Asia

On 8 January, we released our latest Global Economic Prospects report – Slow Growth, Policy Challenges. The main message is that global growth is expected to recover to 2.5 percent in 2020—up slightly from the post-crisis low of 2.4 percent registered last year amid weakening trade and investment.

Let’s take a look at the latest projections for the Europe and Central Asia region. After decelerating to a three-year low of 2 percent in 2019, which reflected substantial weakness in trade and investment, growth in the region is expected to firm to 2.6 percent in 2020.

Earlier weakness predominately reflected a sharp slowdown in Turkey as a result of acute financial market pressure in 2018, as well as in the Russian Federation due to weak demand and cuts in oil production.

The following 5 charts highlight some key takeaways from our report.

1 – Recovery in Turkey and Russia Should Help Spur Growth

Growth in Europe and Central Asia is projected to firm in 2020, as activity recovers in Turkey and Russia, and to stabilize at 2.9 percent in 2021-22. 2 – Export Growth is on Track to Stay Modest

Export growth weakened significantly and is expected to remain subdued, particularly in Central Europe, which is tightly connected to the Euro Area through value chains. 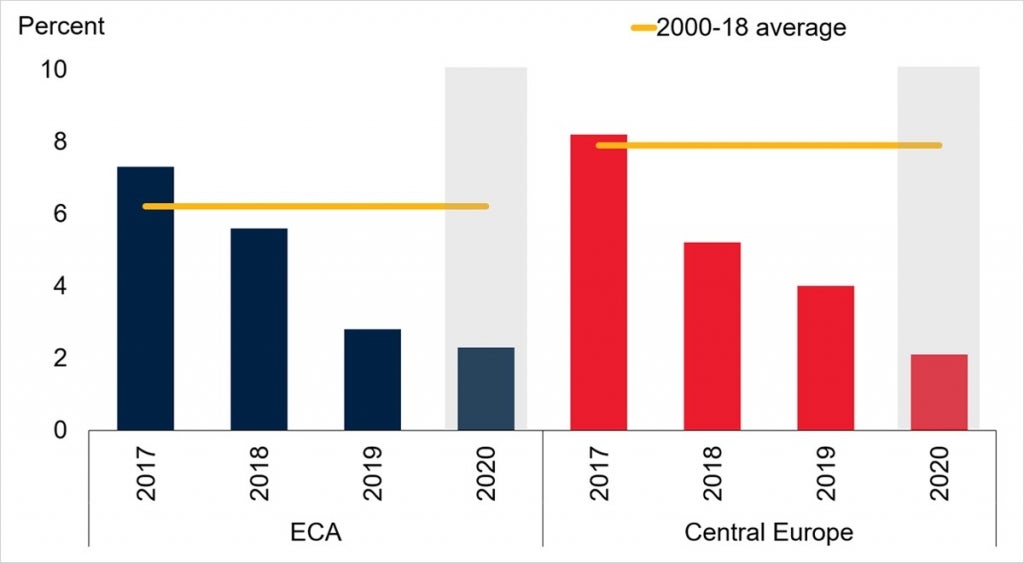 Productivity growth in the region fell to 1.6 percent in the post-crisis period (2013-18) from roughly 5.5 percent pre-crisis—the sharpest decline of any emerging and developing region—a reflection of a substantial deceleration in total factor productivity growth in Eastern Europe, the South Caucasus, and the Western Balkans, and investment weakness in Russia and Central Europe.

Contribution to Productivity Growth in Europe and Central Asia

5 – Fundamental Drivers of Productivity are Slowing

The deceleration of productivity in the region reflects slower improvements in a broad range of the fundamental drivers of productivity. A comprehensive policy approach is needed to improve the provision and quality of factors of production, boost firm productivity, promote productivity-enhancing sectoral reallocation, and establish a more growth-friendly business environment.

The main external risks to regional growth include spillovers from weaker-than-expected activity in the Euro Area, disruption related to Brexit, and escalation of global policy uncertainty. The region also remains vulnerable to disorderly commodity and financial market developments.

Read more about the latest growth outlook for Europe and Central Asia.