Armenia can reach for the stars – with the right skills!

April 7th is an Armenian national holiday celebrating motherhood and beauty. And it may not surprise you that, since it comes one short month after International Women’s Day, we tend to combine the two events into a 30-day celebration of opportunity.

We get a lot of oversees movies here in Armenia – conveniently located at geographic and cultural crossroads – so l discovered a charming film called Hidden Figures which has captured a lot of interest in this very scientifically-minded country. It is an inspiring story with a lesson that translates easily here – that if all Armenian students and workers are empowered with skills, opportunity, and family and community support, they too could reach for the stars!

Last month, inspired by International Women’s Day, we explored the demographic challenge facing Armenia and focused on some special aspects of knowledge-driven economic sectors that are priority drivers of future growth – science, technology, engineering and mathematics, or STEM. 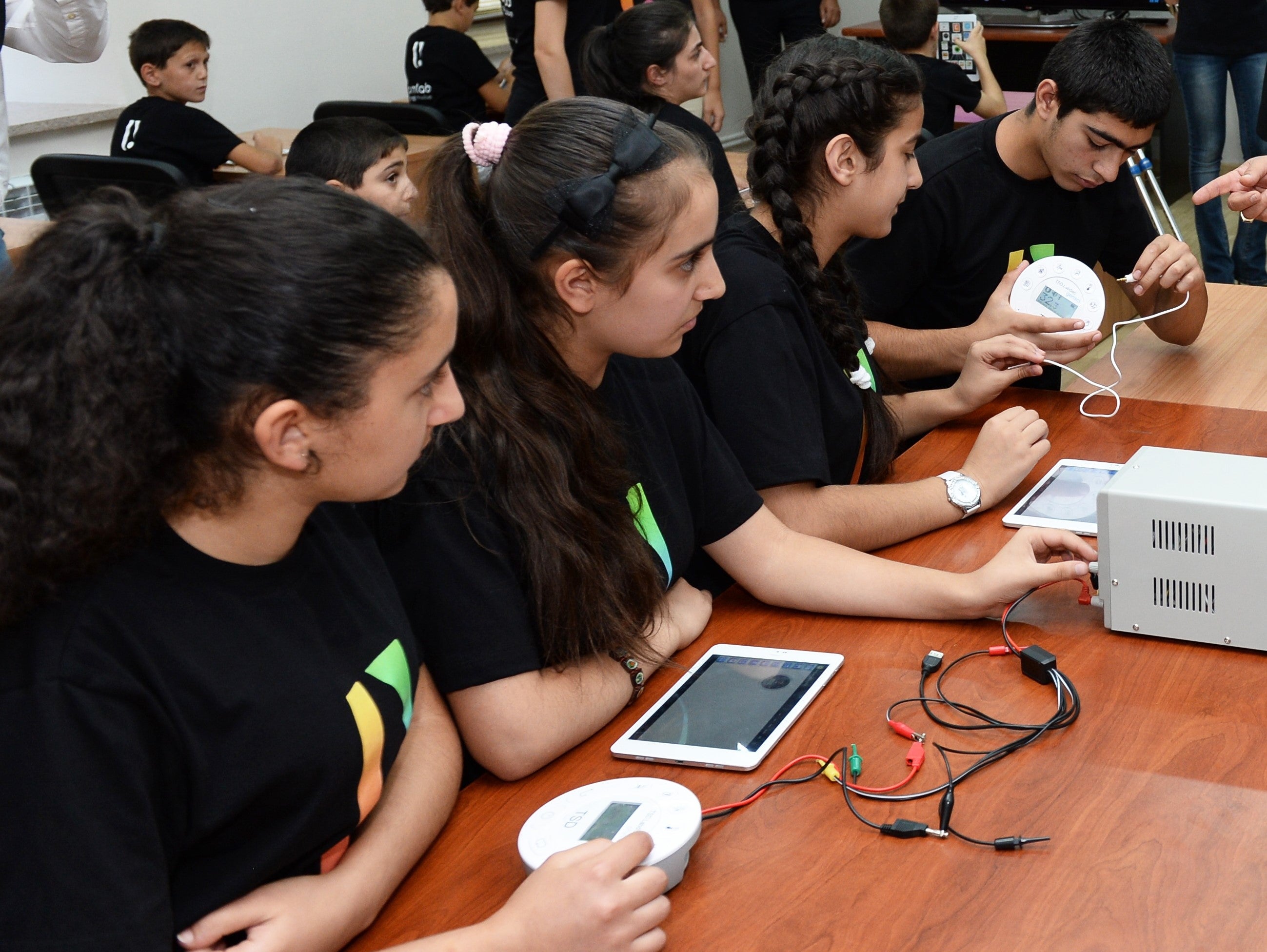 Here’s the bottom line: STEM jobs are potentially great jobs, and maybe even more so for women, for several reasons: they are increasingly in demand, they help workers build skills, they are flexible, and they pay more and have smaller gender wage gaps.

We recently completed some interesting research using a mixed-methods approach here in Armenia to understand the barriers facing women at school and work, and here’s what we found:

Social norms are a big barrier

Cultural stereotypes about the types of work in which women should engage and their responsibilities at home present the strongest barrier to more balanced employment in STEM in Armenia. This is due to a resurgence of conservative biases that emerged after the collapse of the Soviet Union—with notions that gender equality was unattainable—and also due to financial crises and economic stagnation. Unemployment and underemployment became a challenge for both men and women.

Moreover, the prestige of STEM suffered as the stereotype of the “hungry engineer” emerged—a Soviet-educated professional with diminished job prospects – and the surging IT sector is only partially reversing this perception.

Although access, enrollment, and achievement rates are gender-equal in Armenia, women and girls tend to self-select out of STEM education tracks and career fields. This pattern not only deprives women from reaping the many benefits of high-paying and flexible jobs (underutilizing their skills and leading them to take on a larger share of non-remunerative activities in the home), it also threatens the competitiveness of the country as a whole.

In the table below I summarize the different factors that constrain women from studying STEM fields and pursuing STEM careers. Each has been explored using both qualitative and quantitative data, and the final report (available here in May) will provide detailed discussion of both educational constraints and constraints to work.

The good news is that stereotypes can be overcome and barriers lowered with relatively simple, cost-effective, and focused policy actions delivered through three main channels: educational institutions, the workplace, and society in general.

Summary of barriers to gender equality in STEM in Armenia 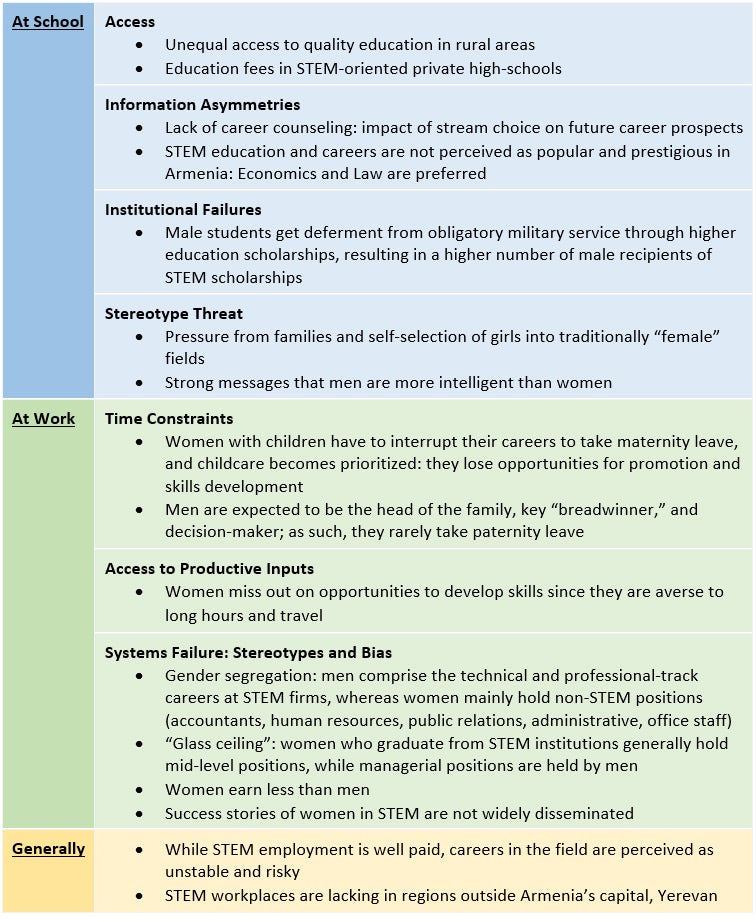 P.S. Curious about our research?

Quantitative data was collected from the National Statistics Service, and a qualitative analysis was conducted to examine the presence and relative influence of factors that prevent Armenian women from translating academic success into productive careers in the STEM field. Focus groups were conducted in four of Armenia’s twenty three STEM-focused vocational education and training (VET) institutions; in four of its twenty nine STEM-focused universities; and in five of the twenty five leading STEM employers. 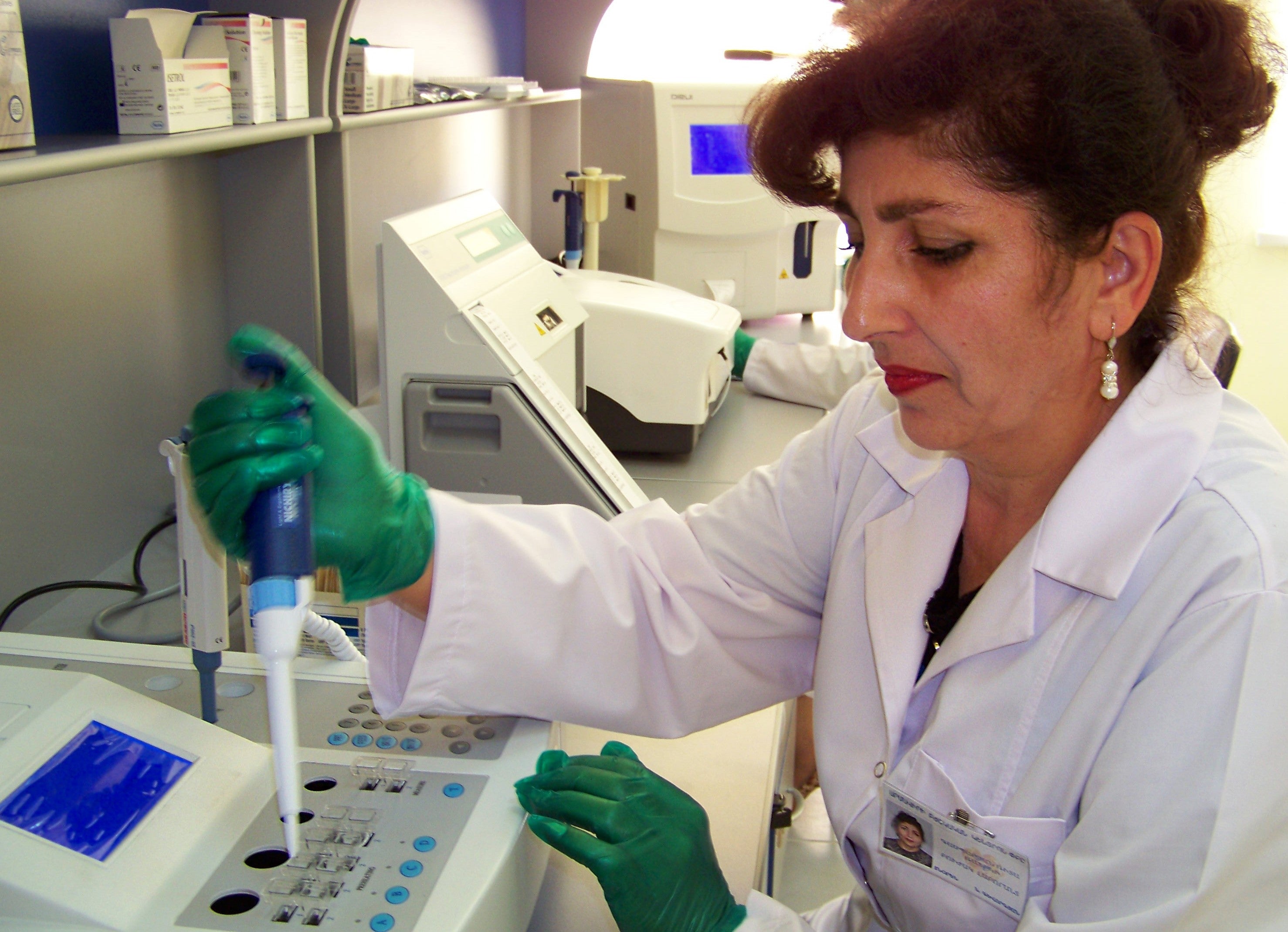 Focus groups were also conducted in four non-STEM VET institutions and universities, and in the TUMO Center for Creative Technologies in Yerevan (the capital), and in Shirak and Gegharkunik provinces. In-depth, one-on-one interviews were also conducted to complement the focus groups.
Topics
Education
Gender
Digital Development
Countries
Armenia
Regions
Europe and Central Asia Great research. Being originally from Armenia, I can tell that some of those barriers were responsible for my career choice as well, when graduating from high school. I would like also to point out that gender gap in pursuing STEM careers is wide even in developed countries, such as the United States where the factors such as time constraints and stereotypes and biases at work are also quite strong.
What is the policy advice for the Armenian Government? Having girls opting out from STEM professions is a loss of a great potential for the country. While stereotypes and biases are difficult to change, they are not unbreakable. We have seen many of those shaken in the last 25 years, including the notion of a “key breadwinner” in the family. With targeted public policies and advocacy many of those barriers can be defused or eliminated. In my view, improving and incentivizing the access for girls to STEM education at school, improving the quality of STEM education in rural areas should be the key starting point.