Beyond celebrating – Removing barriers for women in the South Caucasus

After seventeen months in the South Caucasus, I have learnt a lot from colleagues in the countries of Armenia, Azerbaijan and Georgia about this day, March 8th. It is considered one of the most grandiose days of the calendar – when women and girls of all ages are acknowledged and showered with flowers and gifts of various kinds. Gifts range from a handmade card or a trinket to a bunch of violets or mimosa flowers. Older women might receive a bottle of French perfume, cosmetics, cutlery, crockery or other household items.

On March 8th, it is a common occurrence to see street vendors selling flowers in abundance, and shops are mainly full of male customers. The most important gift is that, on this day, men are also supposed to do all the house chores, so that on this day at least, women can forget about dishes, cooking and childcare, and enjoy some well-deserved time off! In a nutshell, it is a day of paying tribute to women everywhere – in homes, classrooms, and workplaces.

But, to what extent is this outward acknowledgement of women reflected in daily practice of more equality between women and men?

Twenty years ago, Nino, a Georgian girl, could hardly dream of completing 10 years of education. In Armenia, Anahit’s health and life expectancy was just above 66 years of age. And in Azerbaijan, the opportunities for Zahra to participate in the labor force were about 15 percent lower than her brother’s.

A lot has changed, however, since the landmark women’s conference in Beijing in 1995, where the governments of Armenia, Azerbaijan and Georgia committed to eliminating all forms of discrimination against women – and signed an international convention to solidify such commitment.

Notwithstanding these achievements, progress towards gender equality remains slow and uneven – despite compelling evidence to the effect that women’s education, economic participation and productivity are critical for accelerating progress toward national goals for inclusive growth and poverty reduction.

It has been estimated that most countries could see Gross Domestic Product gains if gender equality is achieved in the labor market – if talented women and men had equal chances to access the opportunity to get a paid job or to become an entrepreneur. With such equality, Georgia, for example, could experience economic gains equivalent to 12 percent of GDP – almost five times government spending on education in 2012. In Armenia, the gains have been estimated at close to 14 percent of GDP in 2014.

So what is holding back countries from exploiting these economic gains?

In all three South Caucasus countries, there is a clear divide between where women and men work and the type of jobs they do. Women are concentrated in low wage sectors – health, education and social services – while men dominate the better remunerated sectors. Young women tend to graduate in the arts and humanities, education, or health care; young men are more likely to major in engineering, manufacturing, agriculture, or services.

This is a common pattern within the region – where social norms often reinforce a gender division of labor in which men are seen as breadwinners and women mainly as caretakers. Our Azerbaijan Systematic Country Diagnostic finds that this problem usually begins in school, where young women choose academic fields over engineering, science, or other subjects. 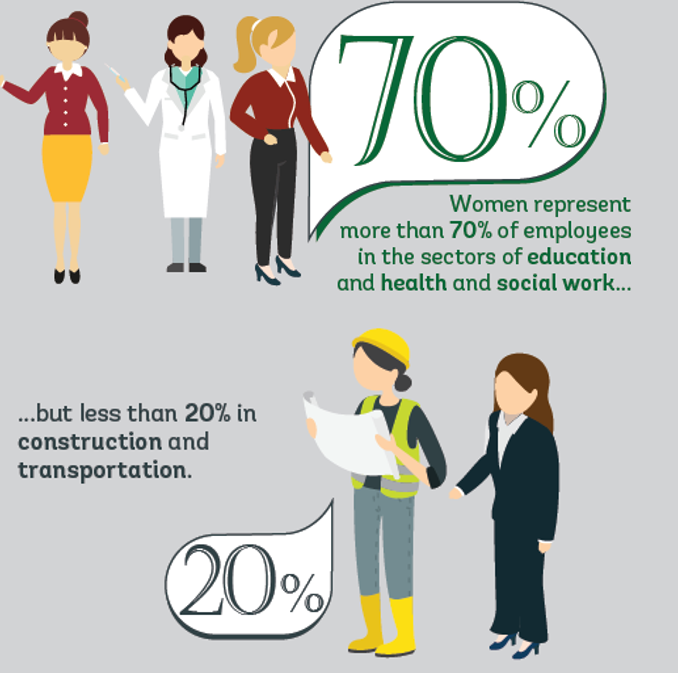 In all three countries, girls are outpacing boys in educational attainment – but they are not getting rewarded for this in the job market. Our Georgia Country Gender Assessment shows that, although there are almost no gender gaps in enrolment in education, girls consistently outperform boys in reading, mathematics and science. And, they are more likely than boys to enroll in tertiary education.

Women who have completed higher education constitute the largest category of unemployed women, a share that grew between 2007 and 2012. And, when employed, these women face a gender earnings gap (37 percent in 2014). A disproportionately large share of women simply stay out of the job market during the prime productive age of 25–34 years. When balancing family and career duties becomes challenging, women are much more likely than men to abandon their careers and opt for the family.

In Armenia, educated mothers with young children are 17 percent less likely to be economically active than men of similar age, education and family status – due largely to the time constraints that come with family care responsibilities.

But what can we do to capture the potential losses incurred by women not fully participating in the labor force?

Experience from many countries shows that childcare centers and preschool institutions, for example, are a double-win. They help women balance work and childcare responsibilities, and are pivotal in early investment in future generations. In all three countries in the South Caucasus, more can be done to increase access to affordable and quality childcare.

Facilitating a more informed school-to-work transition among young women (and men), while addressing factors that discourage them from entering technical fields, is another double-win. Why? Because this can encourage young women to seek work in better paid sectors and jobs, and receive the best returns possible for their education and skills. Furthermore, girls who do take science, technology, engineering and mathematics – and who then enter jobs in high-earning sectors – will be strong role models and trail-blazers for future generations of girls to come. Let us therefore celebrate March 8, 2017 by keeping in mind that – in addition to the flowers and gifts – we should also promote true everyday equality between women and men. This really is the only way to achieve inclusive and sustainable economic growth and improve the well-being of everyone in the South Caucasus.
Topics
Gender
Urban Development
Countries
Armenia
Azerbaijan
Georgia
Regions
Europe and Central Asia Dear Mercy,
Thanks for this beautiful piece. Could not read this article before now because the region of my country in which I live was deprived of internet for months. Fortunately that this deprivation was not discriminatory between men and women. When I read this article, I see that my country is blessed today with regard to education for women. We have secondary and technical schools almost in every populated area of a town. In the technical schools, there are many girls competing with the boys. There are more girls than boys attending a higher level of education in many fields. This is a major concern for many young girls who cannot find their match in marriages in this my part of the world.
Thanks

Thank you for this article. Public policy and budgeting has an important role in reducing gender inequality and ministries should be aware of this when allocating resources. Resources should be channeled to areas where change should be made (where inequalities are largest) and designed for remedy. Also, when fiscal policies are implemented, e.g. a new tax introduced, even if there is no explicit discrimination in the tax law, it could still discourage women from participating in the labor market (e.g. higher taxes on secondary earners income). ECA countries fortunately already have a history of gender budgeting.