How can Russia grow out of recession? 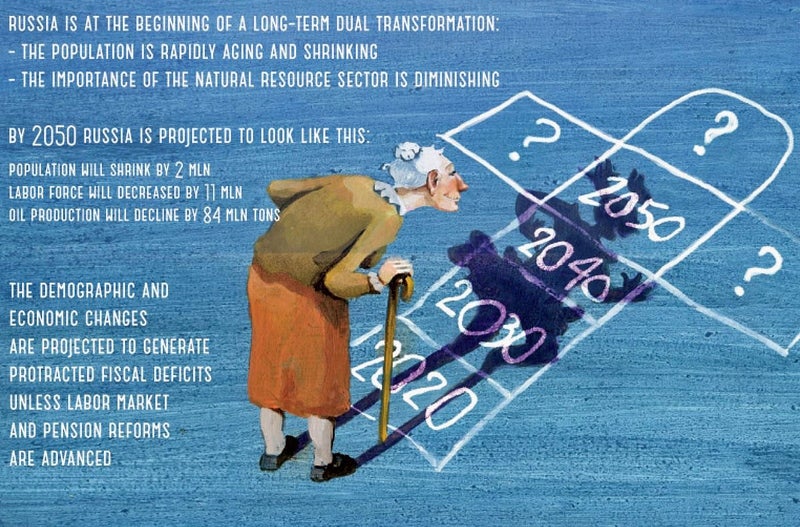 Russia’s economic woes continue: the recession deepened in the first half of 2015, severely impacting households, while the economy continued to adjust to the 2014 terms-of-trade shock, which saw oil prices being halved within a few months. In addition, investment demand has contracted for a third consecutive year.

The record drop in consumer demand was driven by a sharp contraction in real wages, which fell by an average of 8.5% in the first six months of 2015 - illustrating the severity of the recession. The erosion of real incomes significantly increased the poverty rate and exacerbated the vulnerability of households in the lower 40% of the income distribution.

So, if oil prices remain low, how can Russia grow out of its recession?

First, let’s take a look back over the past decade, during which time Russia has run a consumption-driven growth model, fueled by high oil revenues which have translated into growing public transfers and public wages. This has allowed for a massive expansion of the middle-class, to about 70% of the population, and a large reduction in extreme poverty, to about 10% of the population.

Russia can only continue this consumption-driven growth model if it creates highly productive jobs for its middle-class - which can generate high-paying wages.

This is, in fact, a similar growth challenge that most high-income economies in the West face.

However, this model is only possible through investments aimed at upgrading the country’s capital base and which introduce new production technologies and innovation. There are complex challenges to overcome in order to return to positive growth and policies would need to facilitate an economic adjustment to external changes.

Russia’s changing external environment of lower oil prices and sanctions has already started to alter the internal structure of its economy, requiring policy shifts that can address these changes. In the short-term, policies that promote the reallocation of productive factors would enable the private sector to take full advantage of opportunities generated by the recent change in relative prices - created by a weaker ruble - and could potentially lead to a broad improvement in Russia’s international competitiveness.

Achieving this goal will require a further retrenchment of the public sector’s economic role and a shift in focus toward providing highly effective regulatory institutions that foster robust competition. Strong signals from the government indicating a commitment to such a reform agenda would speed up the recovery of private-sector confidence and promote investment, despite tight financial conditions.

While this economic adjustment process is a difficult one, such policies would also facilitate Russia’s economic long-term transformation.

There are two major internal, long-term shifts affecting Russia’s society and economy. The Russian Federation is undergoing a major demographic and economic transformation driven by a rapidly aging population and the diminishing economic importance of the natural resource sector. Russia’s total population will shrink by an estimated 2 million people by 2050. At the same time, the old-age dependency ratio will increase by more than 50% - from 0.4 retirees per active worker to about 0.64.

Meanwhile, while the total output of the oil and gas sectors will remain broadly stable, productivity in other economic sectors will continue to grow and the economic role played by natural resources will diminish significantly in the decades to come.

This long-term demographic and economic transformation will have important macroeconomic and fiscal implications, as the changing size and composition of both the population and the real economy will directly - and indirectly - impact public finances.