Romanian migrants can make a difference back home 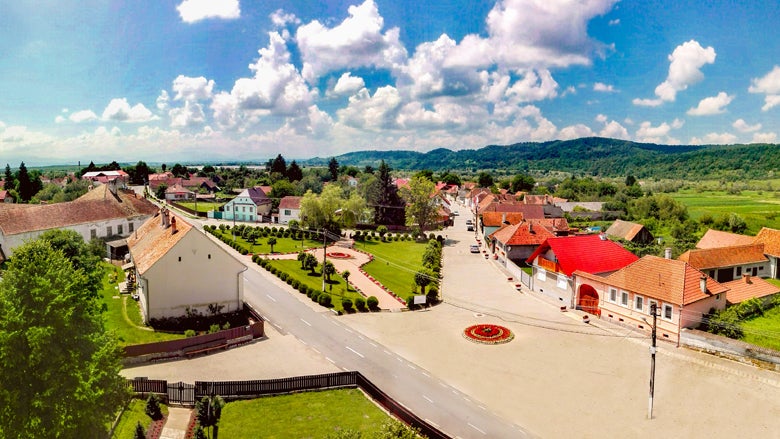 Beautiful, newly-erected houses in an otherwise deserted place. There couldn’t be a better image for the effects of Romanian emigration, which the World Bank has analyzed in a recently published report.

If you are wondering who owns the ghost houses, you only have to look at the sheer number of Romanians living and working abroad - between 3 and 5 million according to some estimates or 3.6 million, according to the UN (2017). Of these, 2.7 million are of working age, equivalent to a staggering 20.6 percent of Romania’s working age population!

With more than one in four people (26.6 percent) with higher education leaving the country, brain drain can have serious consequences for Romania’s future development, since permanent emigration of the highly educated may deprive the country of the knowledge and skills necessary to boost productivity and living standards in the long run.

In healthcare the brain drain has become a real emergency and skilled professionals are becoming harder to find. For instance, in 2017 the job vacancy rate in the health sector was more than double the economy average, implying that many positions remain unfilled.

This reflects the fact that one in four physicians has left to work abroad. Between 2000 and 2013, the number of Romanian doctors that left the country increased by more than 650 percent, exceeding 14 thousand as of 2013 (more than 25 percent of all Romanian doctors). As a result, many rural areas are left without medical assistance, worsening the plight of the poorest Romanians. 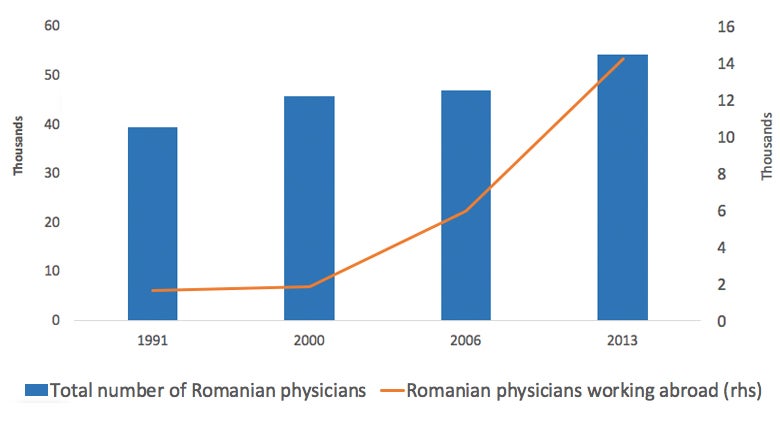 Skill shortages may, sooner or later, lead to increasing wages in the professions that are most in demand. This may help stem the brain drain and persuade some of the more skilled migrants to come back, although the reasons behind the decision to leave the country, especially for skilled professionals, often go beyond remuneration.

Children left behind – a call for action

People with low-skills are often nudged to work abroad by higher wages. This allows them to send money home. Thanks to remittances, many poor families, especially in rural areas, have improved their living conditions and escaped poverty.

A consequence of emigration is particularly painful. Entire generations of children, as much as 100 thousand according to official data, are left behind because their parents are working abroad. They are less likely to attend school than other children of the same age and are more vulnerable and more easily marginalized and excluded from opportunities, according to a World Bank study.

There is a need for a stronger institutional response to support those who remain. This implies better funded and better targeted social assistance, as well as a strong drive to improve health and education to guarantee real equality of opportunity, especially in rural and marginalized areas.

In time, this will help create a better labor market at home and stem the flow of emigration.

Migrants accumulate human and financial capital that is often invested in productive activities back home.

At the same time, an increasing number of Romanian students are enrolled in top universities across Europe and the United States. Their number has more than doubled over the last 16 years to around 33.4 thousand in 2016.

Will they return to Romania after graduation? Some certainly hope so, as they want to make a difference in their own country. Romania could draw on the example of other countries to leverage the potential of young graduates abroad by promoting networks to encourage cooperation and exchange of ideas between students, researchers and professionals at home and abroad. 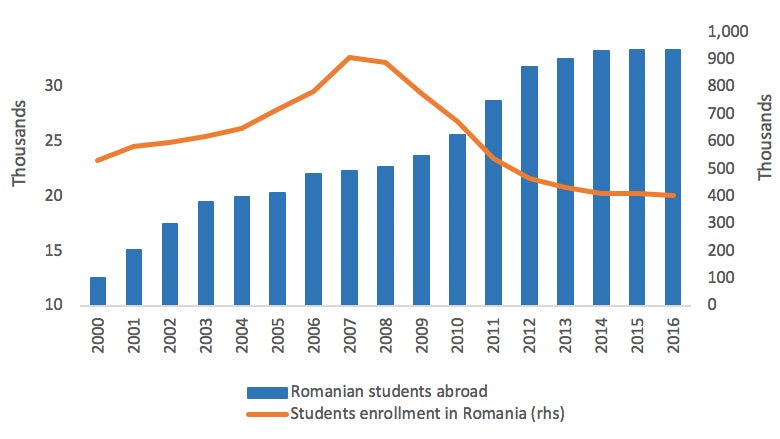 When asked why they do not want to return, skilled migrants cite the political environment, lack of meritocracy and full recognition of qualifications among the most important obstacles.

But Romanians abroad have the capacity and the drive to make a difference back home. Relatively low barriers to movement within the European Union - where most Romanians studying or working abroad reside, permanently or temporarily – will make it easy for Romania to take advantage of circular migration and brain circulation.

Low barriers to movement mean that emigration may already be evolving toward circular patterns, where migrants come and go for short periods of time. This is certainly beneficial for the Romanian economy, since circular migrants can help address the existing shortage of workers, bring new knowledge, skills, international connections and entrepreneurial spirit.

But migrants can also help the country in ways that are more important. As argued in the recently published Systematic Country Diagnostic for Romania, institutions are the critical constraint to the country’s long-term development. Romanian emigrants can return with a fresh perspective on how a society can be fairer and an economy more efficient.

This will help Romania and its institutions change for the better.
Topics
Urban Development
Countries
Romania
Regions
Europe and Central Asia This article provides extremely interesting evidence.
I wonder what kind of institutions are in place in Romania. The shortage of skilled knowledge workers sugggests that the national labor market features all the elements for perfect competition. Nevertheless, the article points out that wages are not very high in Romania for knowledge workers. I would like to better grasp why is this the case: are there too many wage regulations? Do firms cooperate and agree not to poach workers so as to keep wages below the efficient benchmark? However, it seems there to be room for a refinement of institutions that may empower Romanian firms’ ability to attract talent.

The authors perfectly sum up the different faces of emigration from Romania, its challenges and possible opportunities, with its short-run and long-run effects.
No doubt that the intrinsic complexity of the phenomenon carries more or less noticeable contradictions.
No doubt that Romanian institutions are called upon to tackle precisely these contradictions, without making the mistake to take myopic decisions.
In this story, the tragedy of who goes away and the tragedy of who stays are equally worrying. The risk is not only the bleeding of human capital and brain drain, but also that of leaving behind thousands of children, and entire areas of the country . The so-called white orphans are the shining example of this risk, and these contradictions. Migrants’ children, who grow up without one or both parents, are perhaps less poor because of the remittances of their mother or father, but certainly more frustrated, more marginalized, and socially excluded.
Romania’s future development depends also on the full understanding of these unwanted consequences.