Avoiding political potholes on the road to development 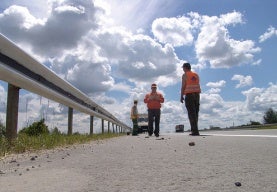 A while back I was working for a small education foundation in Bangalore. Every day I took the bus to the office along a road that had so many pot holes it felt like the driver had decided to take a short cut across the surface of the moon. About a month before I left the whole stretch was covered by a smooth layer of gleaming tarmac and a series of huge posters appeared – announcing the hard work and successful lobbying conducted by our local city councillor.

I was reminded of this, oddly enough, by a recent report into European Development Fund investment in roads in Sub-Saharan Africa.  The EDF has spent € 7.4 billion on roads since 1995 and that around one-third of these roads are now in poor or very poor condition. The report, by the European Court of Auditors, lays the blame for this largely at the feet of African governments, whose failure to invest in routine maintenance or to regulate road usage has led to a rapid deterioration in road quality. It asserts that not only is European money being wasted, but that the development of the region, and the free flow of trade, is being undermined.

The issues it identifies are real and pressing However, the proposed solutions – tighter conditionality, targeting funds to reformist nations and capacity building – need further thought if they are to be successful. What is missing is an acknowledgement of the political aspects of road provision.

The crux of the argument is that government decisions over road investments are based on complex political calculations, which are bound to national governance issues and the nature of the road sector. This means conditionality alone is unlikely to be effective in many cases.

Political leaders can and do use targeted road investment to reward supporters and big, visible investments like road building and one-off road rehabilitation (like fixing my commute in India) capture a lot more attention and support than dull, routine maintenance. There may also be little or no demand for maintenance in places where citizens, however cynically, prefer one-off projects that they can easily monitor and that politicians have a track record of delivering. Corruption can also have a distorting effect, creating incentives to channel funds towards large projects that will maximise rents, either for the personal benefit of officials or to fund election campaigns.

Conditionality will only be able to overcome these incentives where politicians believe that they will be impacted by the future withdrawal of aid and that their actions can make a difference to this outcome. Where political time-horizons are short, ministers move jobs frequently or where a large number of local governments and politicians draw money from the same pot, it is unlikely that conditionality will alter the political calculation.  The inability of the central government to control corruption, especially around election time and where funds are needed to secure support also renders conditionality meaningless.  If politicians and officials believe that they will have moved on by the time sanctions are applied or that, as many are drawing resources from the same pool, changes to their behaviour alone will make little difference, then they might as well reap the short-term political and personal rewards of bad behaviour.

There is also a general neglect of the question of incentives for road maintenance. Governments will maintain roads that they see as being crucial for governance, strategic or rent-generating reasons. Citizens, businesses and farmers who rely on the road network also all have a vested interest in properly maintained roads. However, political lobbying is often problematic in rural regions and community-led action to maintain roads is often undermined by free riding, a lack of local capacity and an inability to finance projects by charging non-local road users. Understanding and taking account of these issues would be a major step forward in effectively targeting aid and support to the road sector.

Looking at these facts I have three suggestions.

First, conditionality will only work for particular countries in particular circumstances and so its usage should be based on careful analysis of road sectors at the country level.

Second, innovative approaches such as improving road-use regulation and assisting in overcoming local collective-action barriers to maintenance should be explored alongside conditionality and continued funding for rehabilitation.

Third, there are clear incentives for governments to maintain roads that have strong lobbies behind them and that are crucial for national stability, governance and generating economic rents. Targeting money towards road construction and rehabilitation in neglected rural regions would not only be better for reducing rural poverty and connecting farmers to national food markets, but would work with the grain and fund politicians’ desire for politically lucrative road expansion.

Taken together this would be a plan for creating a road network that might not be high quality, but would be expansive and usable.