Can aid become more relevant to ‘getting things done’? 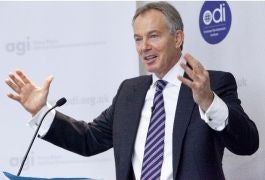 He said it in Washington; now he has said it again in London. Who? Former UK premier Tony Blair, speaking at ODI on governance and leadership for development in Africa.

What has he been saying? That the better governance low-income Africa needs is about getting better leadership (here understood as ‘effective capacity to get things done’) – not just a matter of more transparency and greater accountability.

Blair acknowledges that Africa today is on an upswing, with new generations of leaders emerging. Yet at the apex of African governments, the capacity to make things happen – so that results are obtained within an incumbent’s first term of office and the next election can be won on that basis – remains a scarce commodity (much scarcer than personal conviction or ability). Assisting leaders to crack this nut is potentially one of the most valuable forms of external engagement with poor African countries.

This is an extraordinarily important and timely message in my view. It is so important that everyone should welcome the fact that it is being voiced by someone as prominent and articulate as Blair, regardless of any reservations they may have about some of his own decisions in government.

It is timely because this view of African governance is supported, increasingly, by systematic research. At least five current research programmes around the world have important things to say that complement Blair’s central idea – with apologies for the string of acronyms, APPP,DLP, EPP, ESID and TD.

There is no guarantee that these research findings will get the hearing they deserve. Northern politicians usually have difficulty with anything beyond a ‘transparency and accountability’ perspective on better governance. Blair’s interventions may help to create a more receptive audience.

The message is timely, too, because next month in Busan, Korea, representatives of governments and development agencies will take part in a new round of debates about ‘aid effectiveness’.

Since the 2005 Paris Declaration, the consensus has been that aid works best when it supports ‘country-owned’ development efforts. A glance at the monitored experience might suggest that donors have failed to let go and align their aid properly with country policies and institutions. The truth is more complicated, however. In most aid-dependent countries, ownership is lacking not just because of donor behaviour, but because there is no leadership capacity in the Blair sense. Donor reluctance to ‘let go’ has several causes, but they include the knowledge that routinely, in very many countries, vital things do not ‘get done’.

At Busan, I have suggested, country ownership needs to be redefined as an aspiration, rather than something already achieved and only requiring donor ‘alignment’. The debate about effectiveness needs to shift to how the world can be made more conducive to developmental leadership.

Blair has put his money where his mouth is in this respect. The Africa Governance Initiative (AGI) that he patronises has a working model of how technical assistance focused on systems of priority-setting, planning and performance management at the centre of government can help leaders deliver on their promises and reap corresponding political rewards. Encouraging results have been obtained by the AGI teams working in this way in three post-conflict countries, Liberia, Rwanda and Sierra Leone. Their ambition is to expand and move on. But to where?

I believe that the Blair argument can be broadened, and needs to be if it is to be relevant to a larger range of countries. Looking beyond the three countries mentioned, where leaders operate (in some respects) with an institutional blank slate, there is another barrier to the consolidation of leaderships that are willing and able to ‘get things done’ – dysfunctional political systems.

Most would-be developmental leaders in Africa work within such systems, which may and may not be formal democracies. The kind of political competition they encourage drives politicians to focus on the short term. The imperative to stay in power at the next election is what shapes priorities and implementation, not the long-term needs of national development. This is a feature of competitive politics everywhere, but its implications are particularly harmful in very poor, especially ethnically fragmented, countries that are taking the first steps in development.

Taking risks to get things done

The AGI model concentrates on public policies that are capable of being delivered, and being politically useful to incumbents, within a single term of office. That has its place and will get us some way. But some of the public-policy challenges that Africa now faces are highly demanding – improving the quality and not just the quantity of basic services; securing sound investments in natural resources; designing and delivering major infrastructure. They require measures that are risky and costly to their promoters in the short and medium term. These may well be delayed indefinitely if politicians look no further than the next election – more so if the electoral system is of the ‘winner takes all’ type so that all the benefits from any promising initiative will be reaped by a political adversary.

Dysfunctional political systems and the daunting challenges they present for collective action are barriers to the construction of more developmental leadership. This is why Africa needs AGI and similar initiatives, but also some good evidence-based thinking about how the deeper institutional causes of political short-termism can be tackled as well.

This takes us into the territory of political constitutions, political settlements and informal bargains among national elites – areas where international development agencies are perhaps wise not to dabble. However, there are many countries where purely national efforts have failed to address such obvious problems. Whether external actors, of any type, can help in some way is worth thinking about. This should be the next item on the agenda for all those who warmed to the basic thrust of Blair’s London speech.

The text of the speech by Tony Blair, and audio/video coverage of the event is now available on the ODI website, alongside a series of blog entries by ODI researchers responding to the issues raised. I wholeheartedly agree with David's comments. But I think those trying to enhance states' "effective capacity to get things done" have one other channel worth exploring that he does not mention here.

There are two broad ways to reform how governments work: 1) improve political regimes such that they produce more developmental leadership; 2) improve the institutional capacity of states such that they can actually deliver what their leaders want them to.

Tony Blair is focusing on the latter. When David talks about the "territory of political constitutions, political settlements and informal bargains among national elites," he is referring to the former.

What they both are missing is the opportunity to create better mechanisms within countries to improve the capacity of middle managers and the tens of thousands of government employees to do their jobs better.

This is not rocket science. There are hundreds of books and companies who work in this area in the private sector. But aid agencies have generally stuck to rather primitive capacity building initiatives and have invested rather little in developing homegrown solutions in this field.

The next steps for Tony Blair and others who think like him are to promote much more domestic capacity and innovation in the field of institution building. The more developing countries have the ability to upgrade their own governments (through their own IMOs, rule of law institutes, think tanks, governance academies, universities, consulting companies, etc.), the more effective they will be.

This is a very difficult problem due to human nature. Those in power will not want to take action that benefits their rivals, and will thus naturally focus on shorter-term actions where they can reap the benefits. It is unrealistic to expect otherwise.

Often, in goal-setting exercises, people are encouraged to break down their goals into smaller chunks. For example, if our ultimate goal is to write a novel, this gets broken down into a page a day, or a chapter a week, or something along those lines.

I wonder if it is possible to apply this type of thinking to some of the development efforts somehow?