Fighting Corruption: What have Ombudsmen got to do with it? 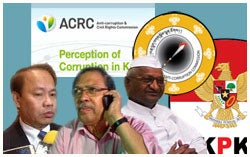 What do Simeon Marcelo of the Philippines, Santosh Hegde of India, KPK of Indonesia. ACC of Bhutan and ACRC of South Korea have in common?  All of them are anti-corruption super heroes (click on the hyperlinks to read their stories) and beacons of hope for all people against corruption. Corrupt officials are terrified of them and they all have served independent ombudsman/anti-corruption agency functions in their country. Over the years I have admired the courageous, professional and dedicated work of these individuals and organizations and had first hand experience of visiting and working with some of them.  Based on this I can confidently say that Ombudsman can and do fight corruption successfully when they have the enabling environment and leadership (later I comment on what the success factors are in my view).

In 2011 the world and I watched with amazement and admiration the nationwide people power movement India against corruption. The movement was led by social activist Anna Hazare and brought millions of Indians to streets to protest against pervasive corruption and demand establishment of a national Ombudsman (called Jan Lokpal in India to build on successes of state level ombudsmen in India. This led to birth of a new political party in India called Aaam Aaadmi Party that swept to power in 2013 in New Delhi state of India on a promise to enact a powerful Ombudsman institution. The party led by Arvind Kejriwal resigned when it could not muster enough support to pass the Delhi state Ombudsman law and is now fighting in the 2014 nationwide elections in India on the anti-corruption reform agenda including a strengthening to the current Ombudsman law. These movements have made Ombudsman (Lokpal and Lokayukta) household names and a symbol of hope in the fight against corruption in India.

With this context I attended with curiosity a Roundtable Discussion at the World Bank on 25th March 2014 on “Role of Ombudsman Offices in Promoting Good Governance and Effective Service Delivery.” The roundtable shared the experiences of Ombudsmen from Ohio, USA, Peru, Ethiopia, Pakistan, and Argentina. Their stories reinforced my faith in the important role the Ombudsmen can and do play in fighting corruption in a wide variety of situation. I would like to congratulate event sponsors -Global Partnership for Social Accountability, Nordic Trust Fund, and the International Ombudsman Institute for highlighting Ombudsmen work.

I was pleased to learn that the World Bank has recognized the important role of Ombudsmen in promoting good governance and fighting corruption and has launched a World Bank Webpage on Ombudsman Institutions. As the website notes, many Ombudsman Institutions (OI) ‘”have a specific mandate to curb corruption. These often operate as a combined OI and anti-corruption agency. Its specific functions may include overseeing the conduct of senior public officials, collecting and reviewing assets and income declarations, investigating instances of alleged or suspected corruption, and educating and informing the public regarding issues related to corruption.”

Now let me get back to factors that determine success of Ombudsman Institutions. Broadly speaking, in my view, these are: (a) independence as embedded in financial and legislative autonomy; (b) courageous leadership that is able to mobilize public support; (c) mandate to go after high level as well as middle level officials and powers to sanction them; (d) professional and well trained staff; and (e) clear metric for results and performance measurement. I am sure I have not listed all important success factors and I invite you to contribute to both success factors and success stories here or send me an email at [email protected].