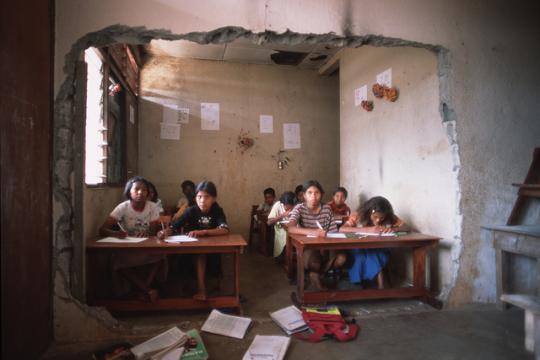 I like entertaining my western friends with stories of growing up in the post-communist Kazakhstan limbo, when everything ended, but nothing had yet started. Stories of how my friends and I would collect old newspapers to trade for books and Moscow magazine subscriptions. ​And later on, selling empty milk bottles back for some cash to buy candy and chewing gum in the newly opened Chinese shops. The audience goes “oohh” and “ahh”, and oh do I feel like I’ve seen a lot and know what life is like!

I have to admit – attending the Fragility Conflict and Violence (FCV) Forum 2015 that took place at the World Bank HQ last week was an experience that changed my perspective on hardships of life in developing countries. There are developing countries and then there are fragile and conflict-affected countries.

And when you are from Kazakhstan and you begin to get a deeper understanding of the situations and strife in places like Liberia, Togo, and South Sudan, your mundane middle-income country memories seem trite.

In the FCV Forum session “Amplifying the voice of civil society in the New Deal”, speakers from civil society, government and the World Bank shared their views on the role that civil society plays and should play in guiding the engagement of both local and international actors in fragile and conflict affected states. This “New Deal” endorses a set of principles proposing key peacebuilding and state-building goals to support country-led transitions out of fragility.

The role of the civil society in the New Deal is to make sure that views of the people of the fragile and conflict affected countries are heard and taken into consideration. They also provide monitoring of how the New Deal commitments are being implemented.

The New Deal should be an inclusive process with government and religious leaders working together.  Rev. Dr. Tolbert Jallah, Secretary General of Fellowship of Christian Councils and Churches in West Africa, opened the session by describing the context in Togo, where upcoming presidential elections, the civic demonstrations and risk of post-election violence surrounding it makes it difficult for civil society to play a meaningful role in the implementation of the New Deal in the country.

Dr. Jallah stated that to be successful, the New Deal should be an inclusive process with government and religious leaders working together.

Priorities of women should be part of the peace agreement.  In her speech on the importance of gender inclusion for the implementation of the New Deal, Rita Martin Lopida, Executive Director of EVE Organization for Women Development from South Sudan, won over the audience with just one simple argument - more than 50% of population is women, and the other half is from women.

The rest of the talk was less surprising even for an FCV neophyte - conflict affects men and women differently and inequality is one of the main drivers of conflict and instability.

Processes are as important as outcomes. Lancedell Matthews, Director of the New African Research and Development Agency, Liberia, told a touching story of the loss of trust during the Ebola crisis. Liberia was one of the first signatories of the New Deal and a lot was accomplished before the Ebola outbreak. Unfortunately, despite all the commitments, when the crisis hit, the New Deal principles of national ownership and the use of country systems were all but forgotten as the development community rushed into interventions.

​“The general impression we got from the post-crisis assessment”, said Mr. Matthews, “was that trust between the state, civil society and international partners has not been improved through the Ebola response efforts which presents a challenge for the implementation of the New Deal. The processes should be as important as outcomes and policies cannot be the end goals of the New Deal framework .”

Play a role in restoring trust. Habib Mayar, a Senior Policy Specialist at the g7+ Secretariat suggested that in a crisis situation perhaps instead of opposing government, civil society should try restoring trust between the actors. In a conflict situation, it’s hard to achieve positive change by creating more conflict. “And when you speak,” he addressed the civil society representatives in the audience, “government should hear the voices of their people, not the voices of donors.”

Be bold! Stand up! And let us hear your voice! “As a donor,” said Anne-Lise Klausen, Head of Partnerships, Fragility, Conflict and Violence Group at the World Bank in conclusion, “we need to make sure there is always space for civil society, for citizens.” What to do more? Be bolder! Stand up and let them hear your voice louder and more often! Yes, I agree that ''...views of the people of the fragile and conflict affected countries are heard and taken into consideration....''

Our western liberal model of governance depends on a functioning government which is responsive to the needs and desires of the governed. And that model falls apart primarily in two situations: 1) when there is too little or no functioning government, and 2) when the government is not seen as legitimate by significant portions of the population. In these situations, people look for alternative sources of protection and service delivery, and that often includes non-state actors. This poses as existential threat not only in the affected territory, but also in the region and globally. These groups may portray themselves as champions of particular ethnic or religious groups, but these groups would not need armed champions in a well-governed society. Good governance is therefore not as simple as beating back corruption, or ensuring transparency and accountability. It goes deeper - it goes to the fundamental philosophical and political bases in which our communities, societies, and nation-states are grounded. Revolutions throughout history have been potentiated by dysfunctional governance, whether is was the madness of King George III or of Tsar Nicholas II.
Just as liberal economic theory hoped to have put an end to destructive economic cycles, so liberal democratic theory thought it had seen off violence as the dominant paradigm for political change. Yet the Great Recession and the current waves of political violence tend to demonstrate that either our theories are wrong, or the practical application of liberalism has been badly botched in many places,