How can we leverage innovations and MOOCs for citizen engagement? 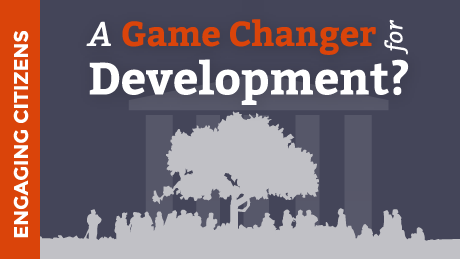 Imagine a group of researchers, students, civil society organizations, development practitioners and professors from the London School of Economics all gathered together for a lively event to discuss the first World Bank MOOC on Citizen Engagement.

The discussion included many voices and perspectives around Citizen Engagement as a Game Changer for Development, as well as around the potential for leveraging Innovations in Technologies and MOOCs to support citizen engagement.

As you can imagine, these discussions were engaging, participatory, and, most importantly, thought-provoking.

To bring you into the discussion, we have highlighted below some important questions, themes, and next steps which surfaced during the event.

In addition to broadening the conversation about development and whether citizen engagement could potentially be a ‘game changer’ for development, the event triggered an active discussion on the role of innovations in technologies and MOOCs.

Citizen Engagement in the Digital Age:  Healthy Skepticism & Concrete Suggestions
The rich discussion among the panelists had a healthy sense of skepticism on citizen engagement programs and the opportunities new technologies and MOOCs can play for broadening the development dialogue.

The panelist agreed that new technologies have the potential for fundamentally transforming development and citizen engagement ; however, the impact is frequently not well understood and is often cast in simple and limited terms.

Evidence from the new book Development as Freedom in a Digital Age shows that under certain conditions, ICTs in fact can significantly enhance poor people’s the human and social capabilities and thus have a positive impact on their well-being.

Furthermore new technologies can play an important role to empower citizens to better make their voices heard, amplify and even strengthen people’s collective and ‘connective” action.

Here's a snapshot of the debate:  What role can MOOCs play? Looking forward: More MOOCs can do more

From the discussions, it become clear that that MOOCs can democratize learning and bring South-South North-South discussions and knowledge exchange to geographically dispersed people. MOOCs also have the potential to mobilize participation, create communities of practice, and bring together diverse points of views, all of which can enable knowledge sharing and development.

However, much more needs to be done.

Most importantly, we need many more MOOCS on key development topics and challenges.  Equally important, we also need to find ways to include more marginalized communities through broader and easier access.

This is just the beginning of the discussion. We invite you all to join the conversation.

To get you started, see how we can leverage new technologies to proactively engage in a conversation about both the opportunities and challenges of Citizen Engagement. Watch the video below. During my World Bank tenure I worked with civil scoiety and citizens in Madagascar on social accountability supporting public procurement performance and these were some of the lessons learnt:
Citizens are eager to take up roles and assume accountability, but there is great apprehension against the technical complexity of public procurement. This means that MOOCs should be tailored to specific roles and responsibilities citizens can and want to play in the public procurement environment. The message is to embrace them and to not scare them away by oversophisticated content. They do not have to become procurement experts to assume important responsibilities in the procurement process. i.e. focus on procurement outcomes instead of the process: was Value for Money delivered in terms of time, price, quality, place, user satisfaction and sustainability?
Second lesson was that civil society should be empowered to take ownership of the capacity building (i.e. through MOOCs), phasing out dependency on governments and/or donors. In other words it is impossible to take external responsibility to empower all citizens.
Thanks,
Dirk