I was intrigued by Kerala's Akshaya program. Kerala is uniquely, a most decentralized state, the only one of 17 in India to enact the Right to Public Services and, to open citizen service centers called Akshaya, run under the oversight of panchayats, 3-tier local self-governments, in 14 districts set within a 2 km radius of households. Akshaya was designed in its first phase in 2003 by the Kerala IT Mission to improve e-literacy in underserved areas and, in its second phase to provide a platform for government to citizen services through a public-private partnership. Over 60% of Kerala's 33 million citizens have been served by 2070+ Akshaya centers run by private entrepreneurs who collectively earn 30 million INR a month, creating employment for over 20,000 individuals. (For more details, see Akshaya Overview and UNDP Report on Akshaya).

Kerala's e-Governance programs, including Akshaya, are set within the context of a US$ 9 billion National e-Governance Program (NeGP), at the heart of the Government of India's strategy to improve services at the base of the delivery chain. The goal of the government-wide NeGP initiative is to make services accessible to 'the common man' in her/his locality.  It seeks to increase the reach of government both geographically and across income classes.  The initiative focuses on efficiency, equity and transparency of services by reducing the burden of physical visits to separate agencies, providing ready access to information, diminishing the discretion of officials, curtailing leakages and corruption in services delivery. State IT Mission teams and a Central NeGP team provide the capacity to implement NeGP across India.

In February, I had a chance to experience Kerala's e-Governance program first-hand when it was time to renew a driver's license. To understand and evaluate the process from the perspective of an ordinary citizen seeking a service, I used a design evaluation technique, a ïcitizen walkthrough' employed to improve the interaction between the government and citizen. (See journal article on designing e-government services, L. van Velsen et al., Government Information Quarterly, 2009.) On a related note, some readers may recall that this blog series highlighted in January 2014 how the US Government uses user-centered design thinking to improve the quality of digital public services. 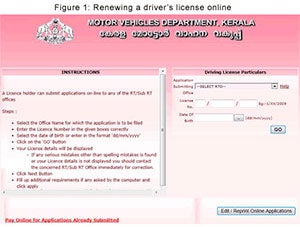 Citizen Walkthrough of an e-Governance Service in Kerala

Sitting in Washington DC, a google search 'renew driver's license Kerala' brought me to the Motor Vehicles Department (MVD) website, and a link to apply. The website provides a set of instructions which organize the process in four parts. The first part is online; the citizen applies for a case number, although I could not register from the United States.  The second part is offline; the citizen prints and fills out a set of forms (an application form to renew a license + a certificate of visual standards for driving + a medical certificate) and furnishes supporting documents (attested proof of address and date of birth). The third part is online; the citizen makes an e-payment. The fourth part is offline; the citizen submits the application number, forms, supporting documents and proof of payment to the Road Transport Office (RTO). (See Figure 1)

On a trip to Kerala in February, I paid a visit to the Trivandrum RTO.  People jostled for space at the Public Relations Officer's counter. Being one among few women in a relatively tight space, it was a somewhat disconcerting start. I managed to get to the front of the counter to ask the officer how one might renew a driver's license. He pointed me to a poster off to the side, written in Malayalam and English. 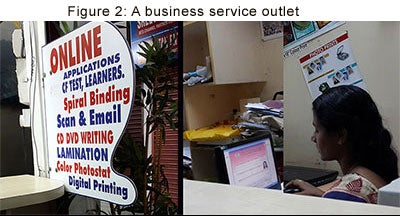 At this point a man who had watched the interaction came up and offered, 'Shall I show you how to renew your license?' I sized him up, wondering if he was going to ask me for a 'service charge'. He rattled off instructions, precisely as written on the website. My interest was piqued. I decided to let him walk me through the process. First he led me to a shopping complex next door to a business services outlet where one might email, print or photocopy for a fee. There was a lady sitting at a computer at the outlet.  (See Figure 2). 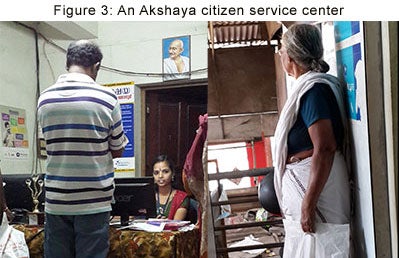 I paid the agent 50% of the value of the transaction to receive guidance on where to go and how to complete the transaction. The entire process took a little over 3 hours.

Game-Changers - Right to Services, Local Citizen Centers and the Internet

What can we take away from the Kerala e-Governance service delivery model that could be applicable to other contexts?

This post is part of a monthly series on Digital Gov. in developing countries. The collection seeks fresh perspectives and insights into policy, institutional and technical dimensions to understand how to make services work for businesses and citizens. The third post of the series reflects on the Govt. of Kerala's Akshaya, a program for digital inclusion and service delivery. Hi Teena. good to read about your positive experience. I was part of the initial e-Governance implementations in Kerala for land registration and also for the RTO implementation which you experienced.

Thanks for reading and for your comment! The State of Kerala in India is certainly showing the way forward on service delivery to citizens through the Akshaya program.
Looking forward to a sustained program of innovations from the Govt. of Kerala, particularly in areas such as (1) Citizen-centered design -- mapping a citizen's journey end-to-end, not only once an application is submitted online, to uncover policy and brueacratic hurdles, and (2) Agents -- addressing the role of informal agents as channels for corruption (Bertrand et al , 2006) versus the role of licensed agents who may offer customer support at service centers.
Kind regards,
Tina.

Hello Tina. Greetings from Public Affairs Centre Bangalore (pacindia.org. You would be aware of similar initiatives of the Karnataka government (Bangalore One, Karnataka One) that offer single window service points for all government services, and of the online property tax payment system, as well as a similar payment and management system for the matters related to transport licenses. The Public Services Bill 2009 institutionalizes these into more comprehensive regimens (such as SAKALA in Karnataka and Akshaya in Kerala) that offer much hope. PAC is in a project now to assess the effectiveness of such measures across India so far.

Dear Mr. Suresh,
Many thanks for reading and for your comments. Thank you for bringing attention to SAKALA in Karnataka. Another noteworthy e-governance initiative connected to RTS is e-SLA in New Delhi for citizens to track and monitor service status.
We would be very interested to learn more about PAC's assessment of service delivery improvement measures. Please do feel free to get in touch with us at askgov (at) worldbank (dot) org.
Kind regards,
Tina

hai tina glad to read such a good report from a reporter,while others are making as frauds.and one more thing we are facing such financial crisis so at that time such a report make us more selfconfident. thanking you

Hi Tina, Nice to read your article. Am an Akshaya Entrepreneur from Kerala.

I love the online access to services via this, especially tour guides.

Great post, thanks for your valuable information. Your way of presentation is good. Most of computer service center in Chennai are using internet for public service, in present generation most of the people having own mobile to browse anything from their hand. Anyway nice post.

Kerala has been taking full advantage of the internet revolution which is happening throughout the country. Officials are using the broader reach of the internet to communicate with everyday citizens.