How to make sense of government accountability 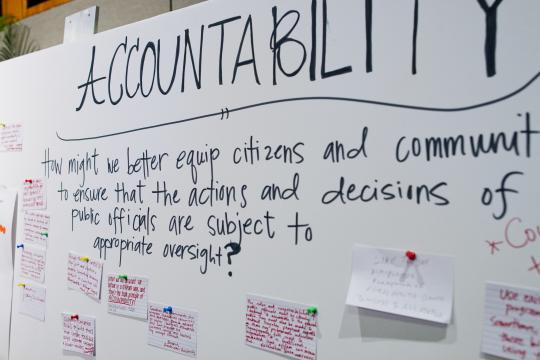 Accountability is an elusive concept, but understanding where it originates can help citizens find ways to hold governments accountable.

In the narrowest sense, accountability is equated with answerability; it refers to the obligation to give an account of one’s action to particular individuals, groups, or organizations.  However, in a world where public administrators increasingly operate in intergovernmental networks and global coalitions, deciphering what constitutes accountability in public management has become a challenging task.

One of the simplest ways to unravel the mystery of accountability for public administrators is to trace back to the root sources; and examine how it unfolds across varying levels to affect governmental decision-making.

Here are five key channels to look for the “pressure points” of accountability:

Political Accountability
Political accountability is arguably the strongest form of governance  anchored in democratic principles. It is a means to exert political control or oversight. Appointed public officials are directly accountable to the executive branch with responsibilities in policymaking, ranging from education, to national defense to environmental protection. At the same time, they also possess a variety of authorities over rulemaking delegated from legislators. These responsibilities dictate that public administrators should account for their actions in the context of designing and implementing laws, rules, and regulations.

Citizen Accountability
Citizens can hold government administrators accountable through participation laws  and deliberative forums. It is worth noting that in most Western countries, the accountability pressures imposed upon public administrators by citizens are a rather indirect force, because appointed officials do not undergo elections (which are a major source of accountability for elected politicians and legislators). However, myriad innovations, often scaled by information and communication technologies, are being devised to empower citizens’ ability to directly access bureaucratic information, monitor government activities, and supply real-time feedback on public service delivery. These demand-side tools are undoubtedly instigating an evolution on public accountability .

Legal Accountability
Legal accountability is based on relationships between members of a government agency and lawmakers outside it. Lawmakers can impose legal sanctions or formal contractual arrangements. It should be highlighted that this relationship is different from the supervisor and subordinate arrangement in bureaucratic accountability, which is in essence hierarchical. In legal accountability, the two parties are autonomous; and it involves a judiciary agreement between legislators and public managers.

Professional Accountability
Professional accountability has become a novel way to instill discipline into government activities . It occurs when public officials rely on skilled employees and experts to provide appropriate solutions for technically difficult and complex problems. Authority can be enforced through performance standards, codes of ethics, or licensure in governments . Technical specialists in public agencies such as medical or legal staff may be subject to investigations or sanctions from review boards or disciplinary committees in their profession. Professional accountability can be escalated when public administrators are more exposed to internationally- recognized professional standards.

Lastly, in our interconnected world, public administrators usually face multiple channels of internal and external accountability pressures, and different accountability streams often conflict with one another. In practice, the codified laws or administrative procedures may sometimes run contrary to what professional judgment or ethical values entail. To effectively hold governments to account, an integrated perspective is crucial  to sort through the clashing dynamics of various accountability mechanisms. I agree, transparency is vital but very difficult to monitor. If a government or individuals in power preach transparency how can we, the public & the electorate, be sure everything is actually visible & not just what they want us to see?

Nothing is easy, especially bringing transparency in government functioning. Effective right to information laws, independent media, rules/regulations requiring transparency in government decision making and accountability through democratic structures and electoral process will bring in transparency. Effective checks against corruption are another must. Governance reform is a complex process. We can break down the key ingredients of good governance, but can only bring about change through holistic reform.

what is affecting our continents is the lack of political will to implement regulations that will promote issues of accountability and transparency.