It’s all about inclusion, but how? 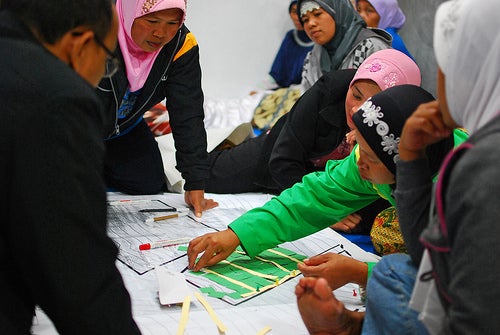 Inclusion is the new buzzword in international development. From promoting citizen empowerment to fostering pathways out of fragility, it is all about political processes that are more inclusive and representative‎.

The newly adopted Sustainable Development Goals are perhaps the most ambitious articulation of this consensus, with Goal 16 in particular calling for building more “effective, accountable and inclusive institutions at all levels”.

And there are good reasons for this call-out. Two findings from research that I undertook for a paper I wrote recently on Political Settlements and the Politics of Inclusion are particularly striking in highlighting the centrality of inclusion:

However, there is a big gap between these two findings, and a fundamental question remains: how can a political system that has a narrower focus on elite inclusion, at least in the short term, become more broadly inclusive over time?

The reality – and central challenge – is that states that are trying to become more stable, resilient and inclusive across the developing world today often need to transform themselves in fundamental ways across multiple dimensions: Some of these dimensions of transformation may reinforce one another. But often they do not. Even if they are undertaken simultaneously – or in fact because they are – they are more likely to generate tensions, dilemmas, and potential trade-offs.

Take the case of countries like China and Vietnam, and more recently Ethiopia and Rwanda. All these are examples of a state that has made remarkable progress in establishing its authority and capacity, especially in terms of generating economic growth and providing basic services. But they have made considerably less progress in making their political systems more open and representative, and their institutions more inclusive in terms of how decisions are made and who is involved.

By contrast, many other countries across the developing world have undertaken a variety of reforms to promote greater citizen engagement in decision-making and policy processes, including the adoption of a new constitution, the holding of elections, and policies to combat corruption and promote transparency. Yet very often these kinds of reforms have so far not been sufficient on their own to put such countries in a trajectory of sustained growth and shared prosperity.

So where does this leave us?

All these different tensions suggest that international development actors need to pay far more attention to the effect of their different interventions as they think about policy and practice.

At a fascinating roundtable at the World Bank Fragility, Conflict and Violence Forum in Washington DC last month, one of the speakers, Erwin van Veen, presented findings from a project that the Berghof Foundation and the Clingendael Institute are undertaking on donor efforts to support inclusive and legitimate political processes, as formulated in the 2011 New Deal for Engagement in Fragile States.

Conclusions from their work so far are less than encouraging. The research suggests that donors are still envisaging change in a cookie cutter, one-size-fits-all way.  That is, they continues to rely on traditional governance and democracy support approaches like elections and accountability, while more imagination and creativity is needed

But this is where it gets even trickier.

Donors have sought to promote inclusion in terms of both process (elections, quotas, constitution making processes etc.) and outcomes (e.g. service delivery). Often, however, donor interventions have tended to remain focused on form, while they have altered very little of the substance of politics and the actual practice and distribution of power.

We still know relatively little about what more creative and bold approaches to institution-building look like. Ultimately, however, one crucial dimension of this is to start by understanding much more deeply where pressures for greater inclusion are coming from within a given country/setting – how different actors and groups for and against different forms of inclusion play out and are organized, how these interests are linked to subnational, regional, international, and global drivers, etc.

In other words, if donors are to respond to the challenge of building more inclusive political processes more effectively, there is a fundamental need to shift away from technical models of how change should happen towards thinking and working in a more strategic, politically aware manner that recognizes that development is not linear and is more open to setbacks and risks.
Topics
Health
Governance
Countries
China
Ethiopia
Rwanda
Vietnam Inclusion has been a very pressing agenda for develop field. Long practice of Right Based Approach of advicacy has empowered the all segment of people globally. In Nepal, we have been facing greater challenge to practice inclusion in all sphere of development. Even people from marginaluzed are coming in front and trying to secure their right. Nepalese new constitution has alsi guaranteed the rights of the dalit, marginalized and weak segment of the society. So, this agenda is pressing but it us achievable be it at the polotical or social and economic sector !

I am happy with the good work being done. Please keep it up
Stay blessed

Thank you for another fantastic article. Where else may anyone get that
kind of info in such a perfect approach of writing?
I've a presentation subsequent week, and I'm at the
search for such info.