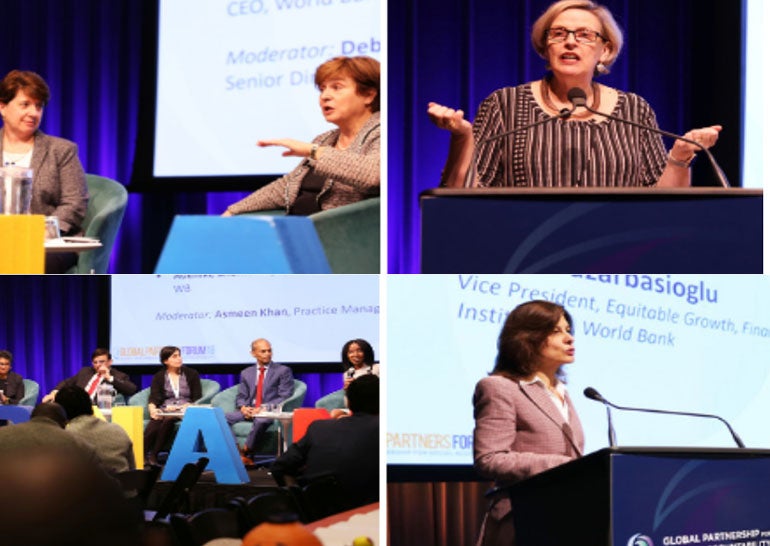 With the creation of the World Bank’s Human Capital project and launch of the Human Capital Index in October 2018 it is fitting for social accountability practitioners to ask how countries would be able to close the ‘human capital gap’ and to be accountable for their efforts?

The Index will enable measurement and transparency and create demand for improved performance, so the Fifth Annual Global Partners Forum of the Global Partnership for Social Accountability set out to discuss precisely that question, with a focus on the role of public finance.

"We have a huge obligation to make sure our investments are carefully considered and meet the needs of those they are designed to serve. As the Human Capital Project gets underway, civil society will play an important role in ensuring that the local population is heard and understood,” said Kristalina Georgieva, World Bank’s CEO, during her keynote remarks. “I count on vibrant and diverse civil society organizations to amplify citizens’ voices as a key part of development planning and implementation.”

The 2018 Forum convened a diverse group of more than 300 social accountability practitioners and thought leaders from civil society, foundations, government, multilateral organizations and academia. It was held at the World Bank from October 30 to November and participants made important recommendations to advance the Human Capital Project.

These ranged from the need to closely track investments in human capital and strengthen governance and accountability systems, to the call to work with marginalized groups, including women.

“I am very excited to explore the link between human capital and social accountability as the Human Capital Index is helping mobilize and engage citizens everywhere,” said Annette Dixon, World Bank’s Vice President for Human Development, while presenting highlights of the Human Capital Project. “The more we get citizens involved, the better and more effective the service delivery will be. And the more we engage the community, the greater the chance for real change.”

"It is essential that money is well spent, and it is important for financial inclusion to engage with civil society,” said Ceyla Pazarbasioglu, World Bank’s Vice President for Equitable Growth, Finance and Institutions. "There is also enormous potential for including more women in the economy. And it is important to show that this is not just the right thing to do but that it is good for business and makes economic sense."

Forum participants agreed. They noted the importance of active engagement with vulnerable populations, adoption of effective gender perspectives and recognition of disparities and power asymmetries across national and subnational territories.

The role of civil society organizations here can be crucial, since they are committed to reaching out to the most marginalized and vulnerable groups and are often better equipped to do this. CSOs can also provide independent monitoring and evaluation of projects on the ground.

Human capital should also be regarded as a vital investment that must be preserved particularly in times of economic downturn, noted the participants. This echoes a core message of the Human Capital

Project, that human capital is going to be the most important long-term investment any country can make for its people’s future prosperity and quality of life and that no country can afford to under-invest in this area.

In this context, international financial institutions and other standard setters have a key role to play in reframing and protecting human capital as an investment, rather than just an expense. And, institutions like the World Bank Group should also use their financial and political clout to help preserve the civic space and foster a sustained and constructive dialogue between governments and its citizens.

Participants observed that the effectiveness of human capital investments, whether for improving the quality of education, health, or social protection, must be independently monitored.

Forum participants also recommended the strengthening of governance and accountability systems to make meaningful progress in building human capital. While acknowledging that some progress had been made, for example, in access to information laws, much remained to be done in terms of institutionalizing accountability systems.

Overall, participants shared a collective understanding that the Human Capital Project requires a broad coalition of support for achieving its goals, including from media, academia, the private sector, as well as CSOs and independent audit institutions. And that peer learning among all stakeholders involved could harness the lessons learned and create opportunities for greater impact at scale.

In this regard, participants noted, a global program like the GPSA was uniquely positioned to continue playing a critical role in facilitating the relationship between citizens, CSOs and governments, leveraging the World Bank’s investments to promote human capital, acting as a credible independent interlocutor, collecting and sharing relevant data and developing the evidence base that would allow governments and financial institutions to scale up the effectiveness and impact of their investments in human capital.

“A core motivation of the Human Capital Index is to induce a race to the top among country leaders. We expect that it will provide a valuable tool to civil society to also hold their leaders and governments accountable for investing more and more effectively in their people,” said Debbie Wetzel, Senior Director of the World Bank’s Governance Global practice. “We expect and hope that governments will demand these prime-time investments not because we tell them to focus on these, but because they understand more and more that investing in their people is fundamental for their full participation in the economies of the 21st century. This project is most welcomed because it gives more physical ownership of investments to local beneficiaries who would in turn provide the required protection for the investments to meet their goals.
NKWETI Roland TICHA
Administrative Board member, Transparency International Cameroon