Transparency and accountability: Bringing the politics back in 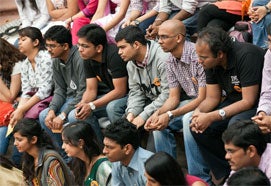 Over the past two decades, citizen-led initiatives to hold power holders to account have taken the world by storm. The promise embedded in such efforts – that more enlightened and engaged citizens demanding greater accountability around issues that they care about can have a decisive impact in improving development effectiveness, the quality of (democratic) governance and the nature of state-society relations – has led to a mushrooming of transparency and accountability initiatives (TAIs). TAIs operating at the domestic, regional and/or international levels now cover a plethora of issues ranging from corruption, access to information, and budget processes, to natural resource management, service delivery, and aid.


But can they live up to the hype?

This was the focus of a recent panel discussion at ODI, which asked whether and how citizens can make a difference in the fight against corruption. Certainly, the research and experience from a variety of countries across the developing world presented at the event suggest that citizen engagement can be “game changing”. Findings from both the Partnership for Transparency Fund and Integrity Action provided heartening examples of citizens making a palpable – and often indispensable – contribution to efforts to combat corruption and promote greater transparency and accountability in settings as diverse as Afghanistan, Liberia, Palestine, the Philippines, and Uganda.

The discussion served to draw out several other lessons about TAIs and their (potential) effectiveness that have emerged over time:


And yet, despite the considerable enthusiasm palpable in the room about the transformational potential of TAIs, the case is far from closed. As Mark Robinson pointed out, there are still a lot of unanswered questions around what works where, how, and, perhaps most crucially, why. What are the factors – enabling and disabling – that shape the possibility of TAIs achieving their stated goals in a particular context?

Getting to the core of this requires grappling with the underlying politics at play – the struggle for greater accountability is about nothing if it is not about altering existing power relations. Yet for a topic that is so fundamentally political in nature, I was struck by how strangely depoliticised the conversation on transparency and accountability turned out to be.

The assumption seemed to be that there are actors in both state and society that are committed to public good objectives in straightforward and uncomplicated ways, but why this might be the case was never really explained. As an emerging rich body of literature suggests, not all forms of corruption are equally corrosive, and in fact the use of rents and corruption more broadly may be less a pathology than essential mechanisms to maintain or strengthen stability and prevent (violent) disorder. Moreover, as one member of the audience put it, who exactly are the “citizens” in these TAIs? How are they organised? Why do they (choose to) mobilize around certain issues and not others?  And what obstacles do citizens and other relevant actors face in organising collectively to pursue joint interests?

Some of the Integrity Action research points out that, overall, problems related to public infrastructure mismanagement have proven considerably easier to address through collaborative engagement than those associated with the poor delivery of services – but why this may be the case has not been sufficiently disentangled.

As recent work, including within ODI, suggests, the core of the governance challenge lies in part in the (in)ability of different sets of people sitting in different places to come together and act collectively in their own interests. However this understanding of the problem as a collective action one also has somewhat of a black box quality to it. Where have power and politics gone in analyses about what makes collective action more or less likely/possible around different interests and how those interests are organised and articulated (think political parties, for example)? At times it seems like citizens and state actors alike have been reduced to atomised consumers whose behaviour can be easily altered on the basis of shifting incentives. This tends to overlook the political processes and relations of power that shape what institutions and incentives come to prevail.

In the end, TAIs are likely to be more effective when certain other enabling institutional and governance factors are present. Unearthing these political dynamics at play, including underlying political arrangements or settlements, is thus essential if we are to better understand what kinds of efforts are likely to work, while others may simply hit a wall of resistance or even backfire.
Topics
Governance
Digital Development Hi Alina -
Thanks for this overview of the panel. What I think is worth adding to your good set of questions is that our research points to a way of assessing the effectiveness of TAI - and sometimes even their cost-effectiveness - by tracking the fix-rate that they deliver.
This takes the analysis beyond the anecdotal and incidental to something more systematic. If we start asking questions about the fix-rates that different TAI's achieve we can then more readily start answering a lot of the questions you raise. More information on the fix-rate approach can be found here at the paper we just published: http://www.integrityaction.org/statistics-measuring-fix
Cheers,
Fredrik