My research finds a surprising answer to this debate. The first step of development is to harness normatively “weak” institutions to kick-start markets. This argument seems paradoxical, even impossible. But once laid out, the logic is obvious.

Contesting the dichotomy of good/bad governance

While experts may not agree on the definition of “good” governance, we know what it is not when we see it. For example:

Normally, observers will shake their heads at this list of problems. Yet in fact, historically, various countries—most notably, China—had adapted this list of “problems” to spur entrepreneurial activities during their earliest stage of take-off.

An illustration from China

Taking history seriously, my book How China Escaped the Poverty Trap, traces the steps of economic-institutional changes in China from 1978 to 2014. This exercise reveals that development occurs in a sequence of three interactive steps, summarized below. 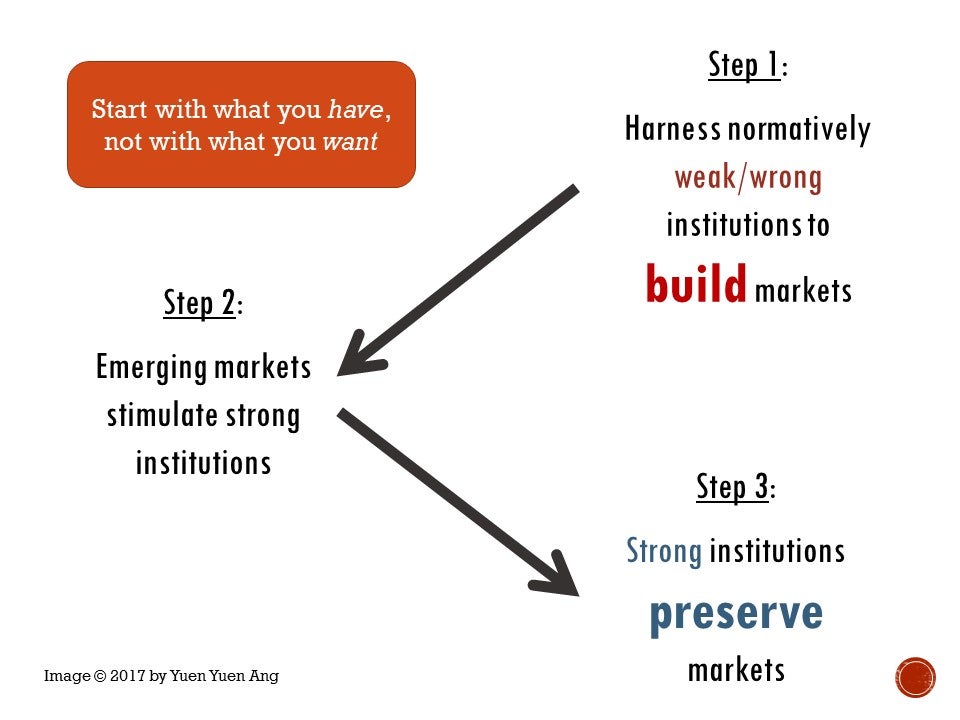 To illustrate, did China’s coastal cities escape poverty by first establishing private property rights, eradicating corruption, and hiring technocrats? No, they did not. Instead, local governments dispatched all civil servants to recruit investors using their personal relationships, like an en masse sales team. Officials received a personal cut of investments made, allowing them to legitimately reward themselves, while formal salaries were kept low.

By conventional norms, it is a case of bad governance. Yet the strategies selected fitted the goals of rapid, coarse growth. It made use of the best resources at the time: communist officials with family and friends. And it was “inclusive” in that the entire civil service (some 20,000 people per city) were mobilized to participate and shared the profits.

Subsequently, as markets took off, the goals of development evolved: from desiring large volumes of investment to high-quality investment only. Evolved preferences and new wealth then propelled local governments to recruit professionals and formally protect property.

In short, my argument can be summed up in a pithy maxim: start with what you have, not with what you want. Instead of blindly importing global best practices, China sparked change by re-purposing what it had in the beginning, including communist and personalist features. This is innovation and adaptive development, unorthodox-style.

Is China’s process of development unique and therefore not replicable? The particular details found in China are of course unique to the country, as it is the case for all countries. What is generalizable, however, is the three-step sequence of development I’ve identified.

The final chapter of my book turns from China to three cases that appear to have nothing in common: late medieval Europe, 19th century America, and contemporary Nigeria. In fact, they share a surprising feature: the first step of development is building markets using normatively “weak” institutions. Conventionally strong institutions or good governance emerged later in the development process, serving to preserve—rather than build—markets. 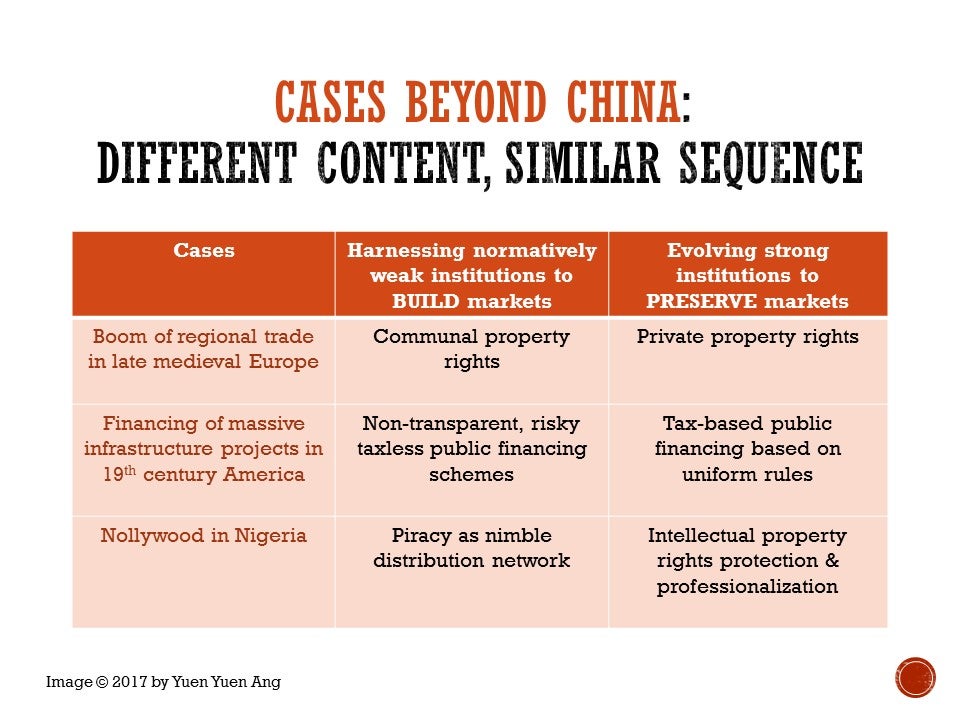 What are the implications for development practitioners? I highlight three key ideas below.
Editor's Note: The findings, interpretations and conclusions expressed herein are those of the authors and do not necessarily reflect the view of the World Bank Group, its Board of Directors or the governments they represent.
Topics
Health
Governance
Competitiveness
Digital Development
Countries
China
Nigeria
Regions
East Asia and Pacific
Europe and Central Asia
Middle East and North Africa
The World Region
Series
World Development Report 2017

Uniquely new perspective challenging mainstream ideas and notions.It is also practical and a must for mainstream development thinking to consider .For developing societies ,this new line of thinking is aptly relevant and recommended to practice .

How China Escaped The Poverty Trap is an excellent book that should be read by less developed countries political leaders and their policy makers. Indeed, it is not a question of which comes first, good governance or economic growth, but building on the strength of each particular economy. However,a stable political environment is needed because implementing regional or national changes, radical or not, requires time, much time,and continuity otherwise democracy could be seen to be abused. Each political party leader has its own agenda and believes that he/she has the recipe for economic growth. In less developed countries, no government can implement substantial changes in only one term.From this perspective, China is different. The author has recognized the specificity of each country and never suggested her approach as "one size fits all". Her book is one of the best in political economy.

Good article and well founded. You're missing one key element - Principle. Leave all principle out of economics and the chicken (fat cat) scenario wins. Add principle to the mix and the egg scenario wins (Stable governance). Can a leopard change its spots! In the case of economics yes, but the transition may come at a heavy cost and everything will depend on the moral fortitude of its society.

Marvelously commonsensical. It is refreshing to find a development economist thinking so pragmatically. Your book is now on my list of things to read.