Use of government systems is important

In many low and lower-middle income countries, development assistance for health (DAH) is a major source of funding for health. How this is delivered affects the ability of countries to achieve and sustain development outcomes. The importance of using country systems when delivering aid lies at the core of the development effectiveness agenda, and for good reason.  A proliferation of development partners in the health sector can create fragmentation of investments or duplication of activities if not intentionally aligned with government priorities. Bypassing country systems can also weaken a country’s ability to determine its own future by building up and entrenching structures that can undermine the development of country’s own systems. In contrast, using country systems builds ownership, strengthens government institutional capacity, and supports mutual accountability of development resources.

No lack of commitment, but lack of progress

Despite repeated commitments of development partners to make greater use of country systems, today, there remains a lack of clarity of what ‘country systems’ means, misperceptions on what can be done to strengthen them, and lack of progress in using them.

Furthermore, it remains unclear what drives the use of country systems. While one would expect that better Public Financial Management (PFM) systems would invite Development Partners (DPs) to also make use of these systems, this does not seem to be the case. Quality of PFM systems and share of DAH channeled through the government appear to be largely uncorrelated (figure 1).

As countries are dealing with the consequences of Covid-19 and the macroeconomic and fiscal crisis, the aid effectiveness agenda has received renewed interest. In fact, organizations such as Gavi, the Vaccine Alliance and the Global Fund are being much more intentional about increasing the share of their grants that are channeled through government systems.  But how does one make progress in this decades-old debate and shift seemingly entrenched positions? 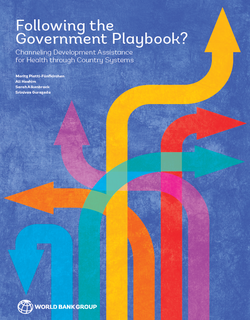 A new World Bank study takes a fresh look at the donor alignment question through a PFM lens. It argues that using country systems is a spectrum, not a binary choice, and that identifying specifically where and how development partners (DPs) are making use of country PFM systems in that spectrum can help inform a constructive dialogue. The report breaks the donor alignment question down to four stages in the budget cycle:

The report offers a set of evaluation criteria for each of the stages in the budget cycle to help respond to these questions in an objective manner. Such a diagnostic could be done by either DPs or recipient countries. The hope is that the diagnostic will serve to establish a baseline upon which to develop a reform program to support greater use of country systems by identifying gaps, opportunities and outlining the roles of various stakeholders. In doing so, it can create a pathway for of mutual accountability.

The report also recognizes that full use of country systems may not always be feasible. However, steps in the right direction can be made without loss of control or added fiduciary risk. For example, DPs may not be willing to channel funds directly through the Treasury Single Account where government finances are consolidated. However they could still use the central bank, but retain funds in a ringfenced account. This would not make full use of country systems but be a useful step in the right direction.

Similarly, it may not always be possible to use the government financial management information system. It may however be possible to use the same basis of accounting and chart of accounts, such that expenditure reports can be integrated to provide government a comprehensive picture of health spending from all sources, and to prevent any duplication of effort by civil servants.

While greater use of country systems is important, it is equally important to strengthen PFM systems in areas of need. This will strengthen government effectiveness while allowing for greater DP alignment in the future. Furthermore, many factors beyond PFM may inform whether DPs are willing to align to country systems, such as strength of democratic institutions, the rule of law, and ability to evidence pro-poor spending.

Simply talking about the importance of moving to country systems is no longer sufficient: it’s time to find new, creative ways to turn this decades-old rhetoric into a reality.  Greater dialogue and nuancing around the “use of government systems” will require a good understanding of these aspects to help build a meaningful reform roadmap.