Child marriage: A persistent hurdle to health and prosperity 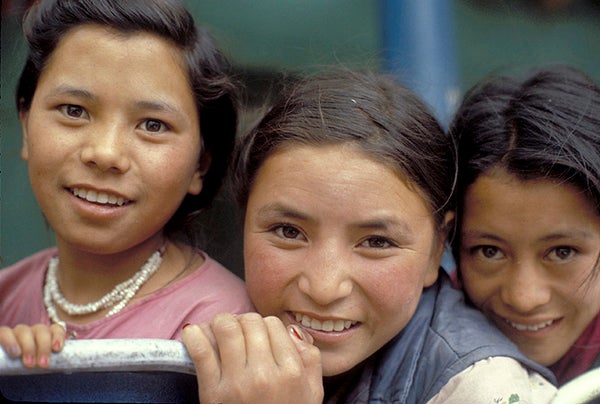 On this Sunday, October 11, the world marks the International Day of the Girl Child. While the day is an opportunity to advocate for girls’ rights across many sectors, one persistent, pernicious issue deserves renewed attention:  the high prevalence of child marriage.

Every year, 15 million girls marry before the age of 18. Child marriage is associated with higher health risks for these girls and their children. It also contributes to high population growth, thereby threatening access of households to the often scarce resources they need to thrive, and putting pressures on government budgets to deliver quality services.

The elimination of child, early and forced marriage is now part of the Sustainable Development Goals under Target 5 – achieving gender equality and empowering all women and girls. This is good news. But for governments, nongovernmental organizations (NGOs), and communities to take the challenge of the elimination of child marriage seriously, more evidence is needed on the negative impacts of child marriage, as well as what works to eliminate the practice.

The International Center for Research on Women (ICRW) and the World Bank are collaborating in an innovative, three-year research project to do just that. The project involves the most extensive data analysis – and for three countries, new data collection – undertaken so far to better understand and measure the economic costs of child marriage. Funding for the project is provided by the Bill and Melinda Gates Foundation and the Children’s Investment Fund Foundation.

A brief on selected preliminary results from the analysis was shared at a side event at the United Nations General Assembly last month. It suggests that child marriage has large negative effects on population, health, and nutrition.

The number of children a woman has over her lifetime has significant impacts on her health, her ability to engage in activities outside of the household, and the poverty level of her household. Analysis of Demographic and Health Surveys for a half dozen countries suggests large impacts of child marriage on the number of live births for a woman over her lifetime. In Nigeria, for example, girls who married at age 12 have a number of births higher by 30% on average than women who married after the age of 18. Even marrying at age 17, rather than 18, increases the number of births by 18%.

Because girls who marry early have a higher number of births over their lifetime, child marriage contributes to higher population growth. Estimates suggest that in countries with a high incidence of child marriage, such as Niger, annual rates of population growth could be reduced substantially each year if child marriage were eliminated, and there were no increases in births outside of marriage by adolescent girls. The implications of these changes at the aggregate level for both government and private expenditures would be significant, placing less demand on often over-stretched services and infrastructure, as well as government and private budgets, and generating a potentially large “demographic dividend.”

Child marriage increases the risk of maternal and under-five mortality and morbidity, leading to significant social and economic impacts from the individual level  to the national level. Analysis of Demographic and Health Surveys suggests that the risk of death before age five for children increases substantially when the child is born to a mother below 18 years of age, as compared to a child with similar characteristics born to an older mother. Delaying marriage therefore would help reduce infant and child mortality.

Children born to child brides also have a higher risk of malnutrition than children born to older mothers -- a significant barrier to the health of the child, their educational prospects, and, in the longer term, their contribution to household and national economies through their labor. Analysis based on Demographic and Health Surveys suggests that children born from child brides have higher risks of stunting than children born from mothers older than 18, with additional risks resulting from a higher likelihood of low birthweight. In the Democratic Republic of Congo, for example, the effect is estimated at seven percentage points. At the aggregate level, this could have significant effects for countries seeking to enhance the human capacity and health of their population.

It is often said that the process of development is multidimensional, with vulnerabilities in some areas affecting other areas. Child marriage is a perfect example of this, since it affects so many areas in the lives of the girls who marry early, their children, and their communities. This is true for health, nutrition, and population, but also for education, labor force participation and earnings, decision-making ability within the household, and even the risk of gender-based violence. As a result, the economic impacts and associated costs of child marriage are large and far-reaching.

Results from joint ICRW-World Bank research on this issue will be updated on the project website as they become available. A launch event for sharing the main results from the first phase of the research is planned for the second half of November 2015 at the World Bank.