Going universal: 24 countries and the “how” of universal health coverage 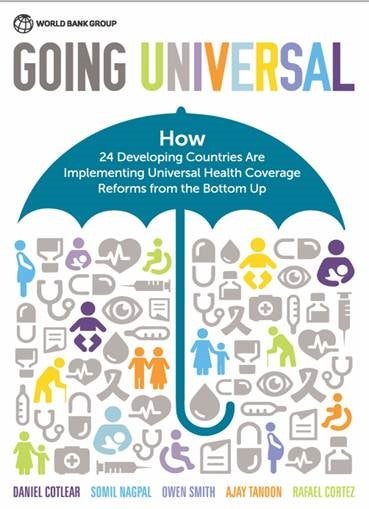 The launch of the Sustainable Development Goals (SDGs) at the recent U.N. General Assembly meetings brought especially welcome news: The future we want now officially includes universal health coverage (UHC), as defined under SDG 3, target 8.  We also heard, the same week, from a group of economists from 44 countries, who publicly stated that “UHC makes economic sense.”  It seems the tide has turned toward making essential health care available to all who need it, without creating financial hardship.

A new World Bank publication brings further good news to supporters of UHC:  It shows that countries have not been waiting for the SDGs to become official. Around the world, developing countries have been eagerly implementing ambitious UHC reform programs.  The book--“Going Universal: How 24 developing countries are implementing UHC from the bottom up” -- seeks to understand how these programs inform policymakers, who may be from different countries but often face similar challenges.

Going Universal finds that these programs are new because they have mostly grown in size during the last decade.  It finds they are massive because they cover about one-third of the world’s population (2.5 billion people), and because they are implemented at scale (no pilots here).  It also finds they are transformational. They do not simply add new schemes to expand coverage to a new population, they aim to fundamentally change the way health systems work, making them more pro-poor, more comprehensive and more efficient.

In terms of covering people, countries have learned that without special efforts to protect the poor, the poor tend to be left behind. Thus, many countries are implementing “bottom-up policies” that start with the poor and evolve towards populations with higher incomes.  These policies begin with the consensus that the poor cannot pay for health care, individually or collectively. This implies the need for fiscal subsidies, for a capacity to identify populations and individuals with citizen identification systems, for a capacity to develop targeting registries and for the explicit enrollment of beneficiaries. Beyond this consensus, countries choose different paths relating to how to finance the coverage for the non-poor populations, especially in the informal sector.

On expanding benefits: All countries studied (with only three exceptions) make benefits explicit by issuing “positive lists” or “negative lists” that make clear what benefits can be expected and leave behind the rhetoric of providing all benefits to all citizens. There is a strong consensus about the first-tier benefits that need to be provided; all countries in the study have in place a system to deliver well-established, cost-effective programs to manage  communicable diseases and maternal and child health care, linked to the “Millennium Development Goals (“the MDG interventions”).

While 7 of the 24 countries studied in Going Universal focus their efforts on strengthening delivery of these MDG interventions, the rest aim to include more comprehensive benefits.  There is no consensus about the next layer of benefits that needs to be added. In fact, the study could not find a clear rationale for the haphazard manner in which the next tier is chosen, with some countries adding inpatient benefits, others specialized outpatient benefits; or some covering basic drugs, others expensive, experimental drugs and tertiary care interventions.

In 18 countries, the additional funds are injected through public insurers, which mostly contract with Ministry of Health providers. These countries are now learning to combine supply-side and demand-side subsidies for health care.

Many of the UHC programs studied are not what the governments would have implemented if they had greater resources, greater capacity, or more time to put in place a more ambitious program.  Instead, they are simply “stepping stones” on the long path toward UHC.

One example of a common “stepping stone” is the use of “public insurers” or “purchasers” that only include the poor and vulnerable.  Our study finds that these purchasers tend to be relatively short-lived and later expand to cover other populations.  This was the case in Colombia, Mexico, Thailand and Turkey, whose public insurers initially targeted only the poor populations and later expanded to cover the non-poor in the informal sector. They used their initial years in the business to develop “UHC skills”, such as identification, enrollment, contracting with providers and audits, then applied these skills more broadly.

Finally, the study yields an important warning: UHC programs are full of promise in terms of their potential to create health systems that are more pro-poor and more efficient, but they also create new risks.   These technically and politically complex programs  often lead to “broken promises,”  such as with generous benefit packages promised to the full population yet  often not really available to the poor.  Broken promises can lead to fiscal risks, especially when accountability mechanisms become stronger and populations are empowered to claim the benefits promised to them.

My hope and that of my co-authors is that Going Universal will help policymakers chart their course and help operational researchers and development partners better understand what policymakers need.