Maternal mortality: Why have some regions seen progress while others struggle?

New estimates released today by the World Health Organization (WHO), the United Nations Children's Fund (UNICEF), the United Nations Population Fund (UNFPA), and the World Bank show that the number of women dying due to complications in pregnancy and childbirth has almost halved in 20 years—from more than 540,000 in 1990 to less than 290,000 in 2010.

This is good news, but it doesn’t tell the whole story. While substantial progress has been achieved at the global level, many countries, particularly in sub-Saharan Africa, will still fail to reach the Millennium Development Goal (MDG 5) target of reducing maternal mortality by 75% from 1990 to 2015.

Why have some developing regions seen progress on MDG 5 while others still struggle? Given different regional and country contexts, it’s a challenge to find a one-size-fits-all explanation. Improvements in health systems, expanded education for girls and increased physical accessibility to health facilities could be contributing factors, but a closer look at progress on other MDG 5 indicators offers a clearer picture.

More recently, the rapid roll-out of antiretroviral therapy in sub-Saharan Africa to HIV-positive women, from
Together, these interventions can be seen as the “building blocks” of an effective strategy to reduce maternal deaths. For countries that have already met MDG 5—Bhutan, Nepal and Equatorial Guinea, for example—they’ve worked well.

But let’s keep our eye on the disparities that persist within and across regions, and on the places where the building blocks haven’t yet come together. For example, East Asia, which experienced the greatest decline in the maternal mortality ratio, has a contraceptive prevalence rate of 84%, as opposed to 22% in sub-Saharan Africa, the region with the lowest MMR declines.

Efforts to improve maternal health should focus on addressing these inequalities as part of a broader health systems strengthening approach. 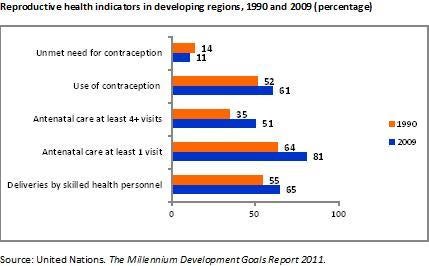 we need connection of the programme both in malabo and bata.this case is very serious in my country.
best regards

Hi all out there, i am glad to know that my country Equatorial guinea is improving in maternal mortality though the reduction is not huge in the region. I believe that if the Government and current NGOs working in our country keep on working together as they are doing currently there will be more changes to come not only in maternal mortality but also in children mortality reduction, women access to education and the access to anticonceptual medications. My Governement is working very hard daily to improve our country but still can do more if they want our peoeple to have a good health, by building more hospitals & clinics, improving health eduction, building schools, roads for medicla access & more.