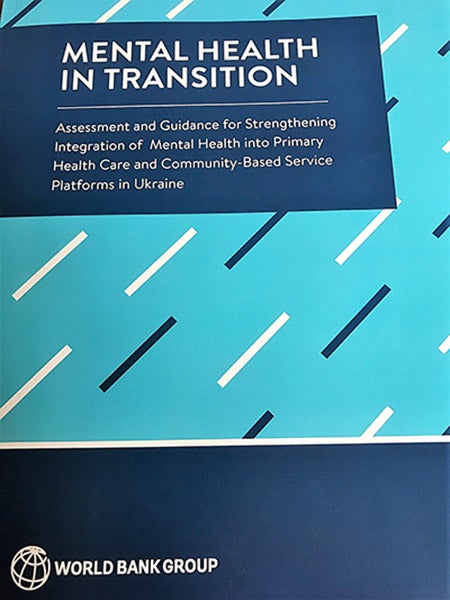 A new report on mental health in Ukraine offers a sobering picture of the often-ignored disease burden of mental disorders, which undermine human capital development and total wealth accumulation in a country. The World Bank Group estimates show that unaccounted “intangible capital” such as human capital, constitutes the largest share of wealth in virtually all countries, more than produced capital and natural resources.

The report is based on a comprehensive mental health assessment carried out in three regions (Lviv, Poltava, Zaporizhia). Evidence suggests that one-third of the Ukrainian population experiences at least one mental disorder in their lifetime, which is significantly higher than the global average. Alcohol use disorder (AUD) is more common among men, while anxiety and depression are more common among women.

Poor mental health is also tightly interconnected with poverty, unemployment, high out-of-pocket payments for medical care, and feelings of insecurity, compounded by the effects of the ongoing military conflict in the Eastern part of the country. Internally displaced populations (IDPs), older persons, and those living in conflict areas are especially vulnerable.

Yet, most people (up to 75%) with common mental disorders and AUDs have limited access to adequate mental health services in Ukraine. Stigma, prejudice, and fear of public recognition as being diagnosed with mental illness may result in job loss, and ruined social standing, further compound this problem.

The report calls for integrating mental health as part of the ongoing health system reform program in Ukraine, seeking to create acceptance that mental disorders should not be treated differently than other chronic health conditions, such as cerebrovascular diseases or cancer. Nor, in fact, are they separable: if untreated, mental disorders can negatively affect management of such co-occurring diseases as tuberculosis, HIV, diabetes, hypertension, cardiovascular disease, and cancer.

This would require that reform efforts be prioritized to focus on strengthening coordination and leadership for mental health involving different actors at central and regional levels, civil society, private enterprise, and international organizations, and build on accumulated evidence to expand ongoing programs in selected regions.

The burden of mental illness in Ukraine is exacerbated by the lack of access to diagnose, misdiagnosis, and inappropriate treatment of ill mental health. Improving the delivery of psychosocial support and treatment would require the strengthening of referral pathways among different formal and informal service providers in the health and social systems, to foster communication, information sharing, education and training, and multidisciplinary teamwork. Mental health services must be decentralized from hospital-based care toward outpatient care and community-based services, including integration with primary health care. At the same time, these efforts would need to scrupulously protect patient confidentiality, given widespread stigma and discrimination.

Financing for mental health services must also be strengthened, as only 2.5% of the total health sector budget is dedicated to mental health care, and the majority (89%) of this funding goes toward psychiatric hospitals. One innovative way to do so is by raising the excise taxes on cigarettes and alcoholic beverages, which can expand the fiscal space to fund these programs while reducing health risks associated with tobacco- and alcohol-related diseases.

Although there has been a strong focus on trauma and post traumatic disorders (PTSD) in the context of the military conflict in eastern Ukraine, it is important to consider the much higher burden of depression and AUDs at the national level. While it is important to tailor mental health services to different groups (e.g., older persons, veterans), it is also crucial that services be accessible to all segments of the population. This would require a dedicated effort to build the capacity of human resources by education, certification programs, primary care provider outreach and education, strengthening the role of social workers, other community providers, including religious leaders.

As most of the working population spends a large proportion of their time at work, the findings of the report are also relevant for structuring wellness programs in the workplace, to raise awareness about physical and mental health risks and to offer programs under benefit plans that guide and incentivize individuals to develop healthier behaviors.  In turn, these programs can have a positive multiplier effect, as employees integrate health and well-being into their daily routines. Lastly, the report stresses the importance of raising awareness of and providing information to the public about mental health problems and service providers, supporting the development of consumer-led mental health advocacy groups, and strengthening the engagement of persons recovering from mental illness and their family members.

The social costs of mental illness are terrible high in any society. Recent research shows that mental illness is a better predictor of misery than poverty is, while the costs of effective treatments are surprisingly low.  If effective action is taken in Ukraine to address the unmet mental health needs of the population, significant positive social and economic returns will be generated. The report estimates that over 4.7 million years of healthy lives can be restored by the year 2030 with scaled-up treatment for selected mental disorders in Ukraine. The economic value of restored productivity over this period amounts to more than US$800 million for depression and US$350 million for anxiety disorders, which means that for every US$1 invested in scaled-up treatment of common mental disorders in Ukraine, there will be US$2 in restored productivity and added economic value.

If countries are serious about achieving Universal Health Coverage (UHC) by 2030, priority support is needed for integrating mental health services into existing health and social support service platforms. Engaging firms and enterprises, civil society, religious organizations, and affected people and their families in this effort will help to directly confront stigma and discrimination.  Each incremental step taken forward at the regional and local levels toward improving access to timely and effective mental health services will make a difference in Ukraine–-to affected persons, their families, at the work place, and for society at large. And it will contribute to build health capital, and hence human capital, to increase the total wealth of the country.

Where is the Wealth of Nations?  Measuring Capital for the 21st Century

The case for physical and mental wellness programs in the workplace

Mental health services in situations of conflict, fragility and violence: What to do?