Rising obesity rates are in the headlines – with increasing recognition of the major role that agriculture and food systems play in the epidemic.  As agriculture economists interested in human nutrition, we wanted to take a look at what it all means, to look at how agriculture and food systems are part of the problem and how they are part of the solution. While conducting research for a recent report, a few things stood out to us. 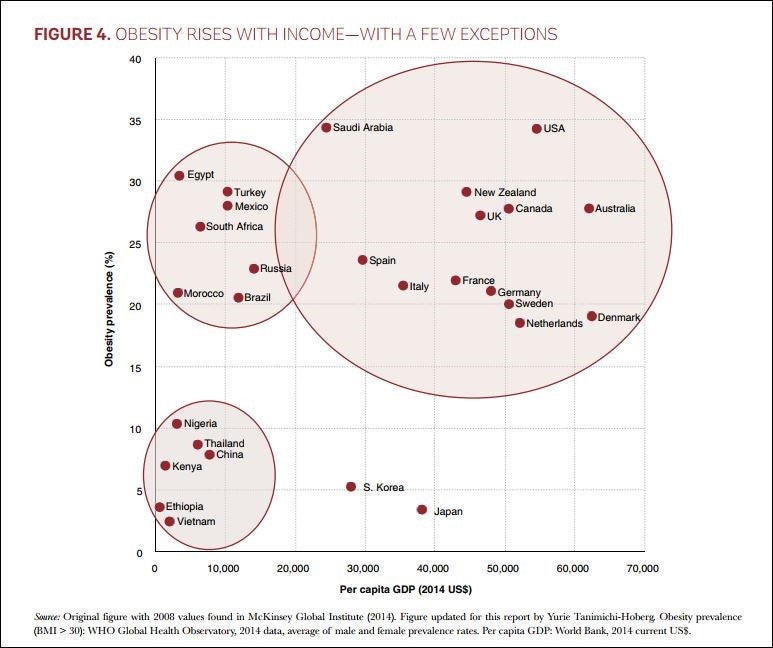 When poverty levels fall, food supply stabilizes and diets diversify, and less people suffer from chronic undernutrition or hunger. However, overweight-- or its extreme form, obesity--shows the opposite trend for the global population as well as for children-under-5. Overall obesity prevalence appears to be positively correlated with a country’s wealth level to a certain degree. For example, GDP and mean BMI is positive and linear up to about US$ 5000 per capita per year. However, to illustrate the complexity of the issue, beyond that level the relationship is less clear with some countries showing high prevalence and others with similar levels of wealth showing much lower levels. There are some countries, especially middle-income countries such as Mexico and Turkey, that have prevalence rates higher than many Western European countries.

Although obesity is sometimes thought to be simply a matter of an individual consuming more energy than expending, the root causes are highly complex with a myriad of factors that directly or indirectly affect this energy balance. For example, the UK government’s Foresight Obesity System Map, identifies 108 separate factors in seven clusters, such as physiology, individual activity, physical activity environment and social psychology. These factors directly and indirectly affect the core equation of energy balance, or energy intake vs. energy expenditure.

The complexity of the challenge explains why at an individual level, it is so difficult for people to “just eat less, and move more to lose weight,” and why at a macro level, no country has fully succeeded in reversing the obesity trend.

The complexity of malnutrition illustrates how a successful intervention strategy would need to be multi-faceted and tailored to a heterogeneous population.  It also shows that agriculture and the food system are part of the solution, and will need to play a key role in such a strategy, especially related to food production and consumption.

From the agriculture and food system perspective, preventing obesity and improving other forms of malnutrition can best be achieved by one common approach—ensuring access to a high quality diversified diet. Actions and policies that support the provision of and access to a safe, diversified and healthy diet should be supported continuously across the entire food system as countries transition from focusing on undernutrition to overlapping malnutrition problems that increasingly include overweight and obesity.  During this transition, attention needs to be paid to trends such as the increased consumption of highly processed foods, which are becoming more accessible to more people around the world.

What are the policies and actions that could make a positive difference in dealing with overweight and obesity?
Based on existing evidence from different sources, here is a list of entry points for action that can support the goal of improving diet quality with a focus on overweight and obesity. These recommendations follow the conceptual framework put forth by the Global Panel on Agriculture and Food Systems for Nutrition (Glopan): 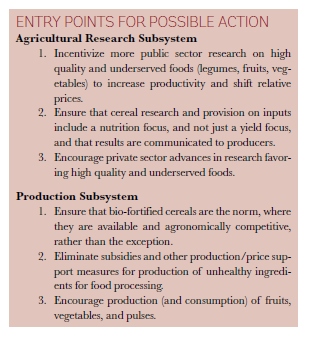 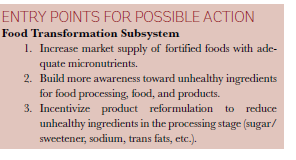 It’s clear in our report that the agriculture sector can meet multiple nutrition objectives, by delivering inputs that will ensure people’s access to a diverse, safe, nutritious, and affordable high-quality diet. Although the obesity epidemic is new to developing countries, many of the efforts that have already been implemented can be effective in combating this phenomenon. Interventions adopted in the food-storage, transport, trade subsystem to improve diet quality are also interventions that are undertaken for more familiar objectives of raising farm profitability by introducing high value crops.  In other areas, new or customized actions are needed. For instance, in the production sub-system where the public agriculture research system is characterized by an almost exclusive focus on yields of basic grain, we recommend also focusing on biodiversity or nutrition considerations.

Given the multi-faceted nature of the challenges, it’s essential to recognize that the agriculture and food sector can only play a limited role in addressing the issue. More importantly, in order to maximize impact, the sector needs to closely coordinate with the health sector, the food industry, and consumer awareness groups. This is an easy thing to say but not easy to implement in real life as we have seen with other multi-sectoral challenges.

Lynn Brown, an economist specialized in gender, food and nutrition policy, social protection and agriculture, contributed to this blog. thanks for the expository research on malnutrition problem all over the world but i think more attention should be focused on developing countries like Africa where undernutrition is prevalent. There should be health/nutrition education by world bodies and donor agencies to the poor population who barely understand the effects of what they eat and drink on their health.Thanks

Obesity is far becoming an epidemic which is as a result of fat accumulation, hence a eating disorder.