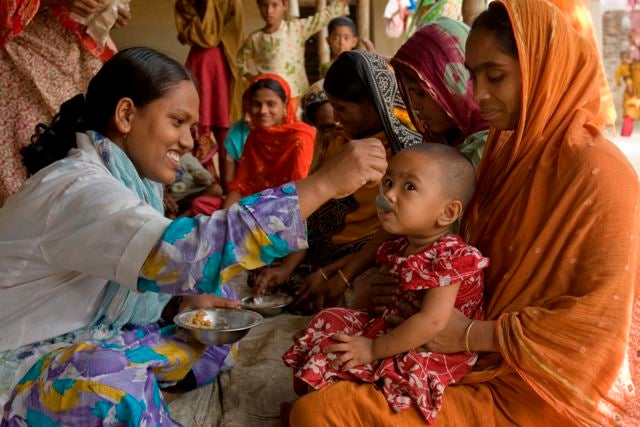 Malnutrition in South Asia is the worst in the world (yes, worse than that of sub-Saharan Africa). It undermines the efforts of countries to reduce poverty, increase educational attainment and productivity, expand innovation and entrepreneurship, and reduce maternal and child mortality. It’s also why, for the past two years, 21 organizations from India, Nepal, Afghanistan, Pakistan, Sri Lanka and Bangladesh have implemented community-based innovations for improving infant and young child nutrition, financed by a unique World Bank small grants initiative known as the Development Marketplace.

Grantee results – on display earlier this month at a meeting to share best practices in Kathmandu – have been impressive. For example, India’s Deepak Foundation used the provision of a child’s horoscope (a culturally valued tool, which many poor families cannot afford) as an incentive to register births and thus to identify low birth weight children in marginalized communities. Helen Keller International fostered homestead food production to improve diet diversity and the consumption of micronutrient rich foods in weaning age and young children in Nepal.

The Lata Foundation employed cell phones to increase the share of poor urban mothers in Nagpur, India, who exclusively breastfeed their newborns for the first six months. And the Training and Assistance for Health and Nutrition Foundation showed how peer counseling in an urban slum could improve feeding practices for children who reach six months, when they need food in addition to breast milk, and when the growth of many children in South Asia falters.

Some people may be surprised to learn that the World Bank supoprts small grants to community-based organizations, through the Development Marketplace. Why did we choose to work with these groups?

It goes to the root of addressing the reasons for high malnutrition in South Asia. We know the region has the lowest birth weights globally; mothers are less empowered and often too young or too malnourished; and the most nutritious breast milk (that produced soon after delivery) is often discarded, among other factors. But we know far less about how to change long-standing beliefs and practices of communities, mothers, mothers-in-laws and grandmothers, and to enable households to change behaviors.

The comparative advantage of community-based organizations is that they have a greater insight into how to affect such changes at the household and community level. Engaging them is invaluable to the Bank and to the countries that seek to improve nutritional outcomes, particularly between conception and 24 months of age (referred to as the 1000 days window of opportunity). Interventions during this period can have long-term effects on children’s IQ, lifetime earnings, years of schooling, and ability to survive illness.

At this month’s gathering of grantees in Kathmandu, other, unanticipated benefits of the program surfaced. I was impressed by how many of the organizations had learned to focus on data and measurement, and how small groups, with limited funds, employed a logical framework and compared results in both cases and control groups. I was also struck by how much more confidence and capacity some of the smaller organizations exhibited in comparison to three years prior when they tried to convince the judges that their innovations were the most measurable, sustainable, scalable and realistic.

But the greatest result of convening 21 organizations from across South Asia, together with government and regional experts, was the exchange of ideas across borders and institutions. The head of the global Alive and Thrive program in Bangladesh noted that several participants asked for the Bangladeshi television concepts they were shown and wanted them produced in more regional languages. “This could shave off up to a year of trying to develop these from scratch in each country,” she said.