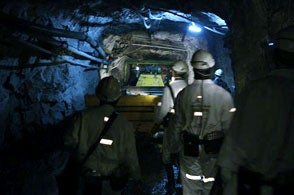 A while ago, I was part of a mission to visit a new hospital in Lesotho. Warned in advance that this facility was intended to treat people with multi-drug resistant tuberculosis (TB)– and knowing the huge burden of HIV-TB co-infection in the country—I was expecting the patients’ demographic to match the profile of HIV: largely young and increasingly female.

What I wasn’t prepared for was the sight of two entire families—young and old, men, women and children—all confined together for the foreseeable future, to be monitored by health workers as they take their daily drugs.

These were mining families – a group Lesotho is striving to reach with better TB care. The country’s long-standing reliance on South Africa’s mining industry, which has provided jobs for up to 70% of working age men at times, has left a crippling legacy of hidden disease.

It has remained hidden for several reasons. While the disproportionate burden of TB among miners—a result of the combined risks of occupational hazards, poor housing conditions, and unsafe sex practices—has been known and condemned for a century, there has been no real coordinated effort to care for those who get sick, or to follow them home before they get a chance to infect their wives and families. The fact that many workers cross borders on their regular migratory journeys makes good clinical care all the more difficult. And when you add in the problems of evolving health systems in labor-sending countries, it is easy to understand how this disease so easily spreads.

Mining is a sector of crucial economic importance in the Southern African Development Community (SADC) region, so addressing a health concern that has a substantial impact on worker productivity, and ultimately revenues, has also become a pressing economic regional issue. Responding to concerns of member states, particularly South Africa, Lesotho and Swaziland, SADC organized a remarkable consultation meeting in Johannesburg a couple of weeks ago. Bringing together government officials, mining companies, workers’ organizations, academics, civil society and development partners, the meeting was the first step towards finding common ground so that a Declaration on TB in the Mining Sector can be endorsed by a wide range of interest groups with broad cross-sectoral support.

Powerful stories of TB-infected ex-miners, and the stark fact that they are still deprived of adequate care, united the group around the idea that the time for effective action is now.

The meeting was an important first step in the process of addressing the historical legacy of disease, and mitigating the current public health risk constituted by mine workers’ TB. SADC’s next move will be to take a refined draft declaration to senior officials and Health Ministers at a ministerial meeting in April, to be followed by a Heads of State Summit in August.

With such high-level regional political commitment, this issue is finally getting the crucial attention it needs. Because with mine workers routinely moving across borders, only coordinated regional action—the kind that unites Ministries of Health, Labor and Finance of labor-sending and receiving countries with industry, workers unions and civil society—will stop families of miners enduring hospitalization together, and achieve the dramatic results we all want to see.